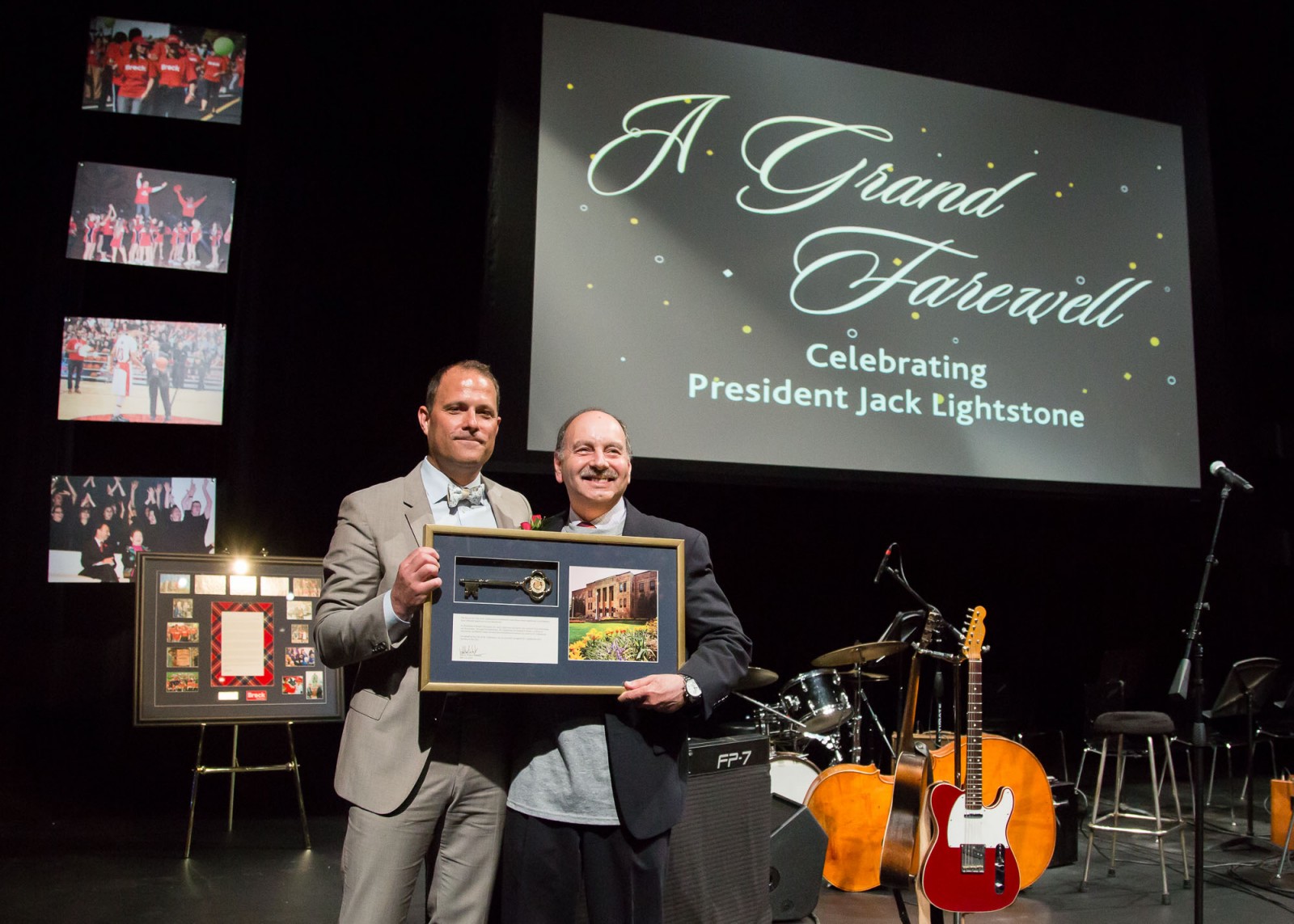 It was a grand farewell 10 years in the making.

With his tenure as president coming to an end on June 30, Jack Lightstone was the guest of honour for a celebration to mark the end of his term at the helm of Brock University Saturday night. A packed house took in a night of music, speeches and laughs at the Marilyn I. Walker School of Fine and Performing Arts in downtown St. Catharines.

Mayor Walter Sendzik, who hosted the event, said it was an appropriate location because the Walker school that helped transform downtown was one of the buildings Lightstone leaves as part of his legacy.

Board of Trustees Chair John Suk said Lightstone has guided the University through an era of historic change from enrolment growth to an explosion in graduate programs to major physical expansion. In addition to the downtown campus, the Cairns Complex, Plaza Building, International Services Building, Welch Hall extension, Matheson Learning Commons and Alumni Field were all opened during Lightstone’s tenure.

“We are all appreciative of how much your passion and commitment and vision have helped make Brock University what it is today,” said Suk.

“On behalf of the community, I say thank you Dr. Jack Lightstone. Thank you for sharing these 10 years with us and enriching the lives of many,” Souter said. “Thank you for putting Brock on the map and giving us another reason to celebrate great pride in Niagara.”

Hutchings gave a humourous speech that included showing Lightstone’s lighter side, such as when he agreed to be part of Brock’s cheerleading squad or taking part in the Ice Bucket Challenge.

Hutchings and others also pointed out the important role Lightstone’s wife, Dorothy Markiewicz has played in Brock’s development and the president’s life.

Among the gifts presented to Lightstone Saturday was a key to the city from Sendzik, as well as a Brock University ring, and a framed, touching letter from a student

In his closing remarks, Lightstone said all of Brock’s advances over the past decade were “a collaboration with the community in and outside of Brock.”

“There was nothing accomplished in the past 10 years that was all me,” he said.

Lightstone said if there’s one message he wants Niagara to remember, it’s that working together is the only way to move forward.

“Both Brock and the communities of Niagara have to find their way in a very big world and compete in a very big world. But we will only succeed if we work together. It’s a symbiotic relationship that will help us both to find our way.”

He also thanked his wife for her support along the way.

“I could not have a better companion, a wiser advisor and an all-around support for myself and this University than my life-long partner and best friend Dorothy,” he said.

Musical performances included: The Journey, a guitar extravaganza composed by Timothy Phelan and performed by Brock guitar alumni; a jazz performance by the Peter Shea trio; and a blues performance by Jamie Oakes.