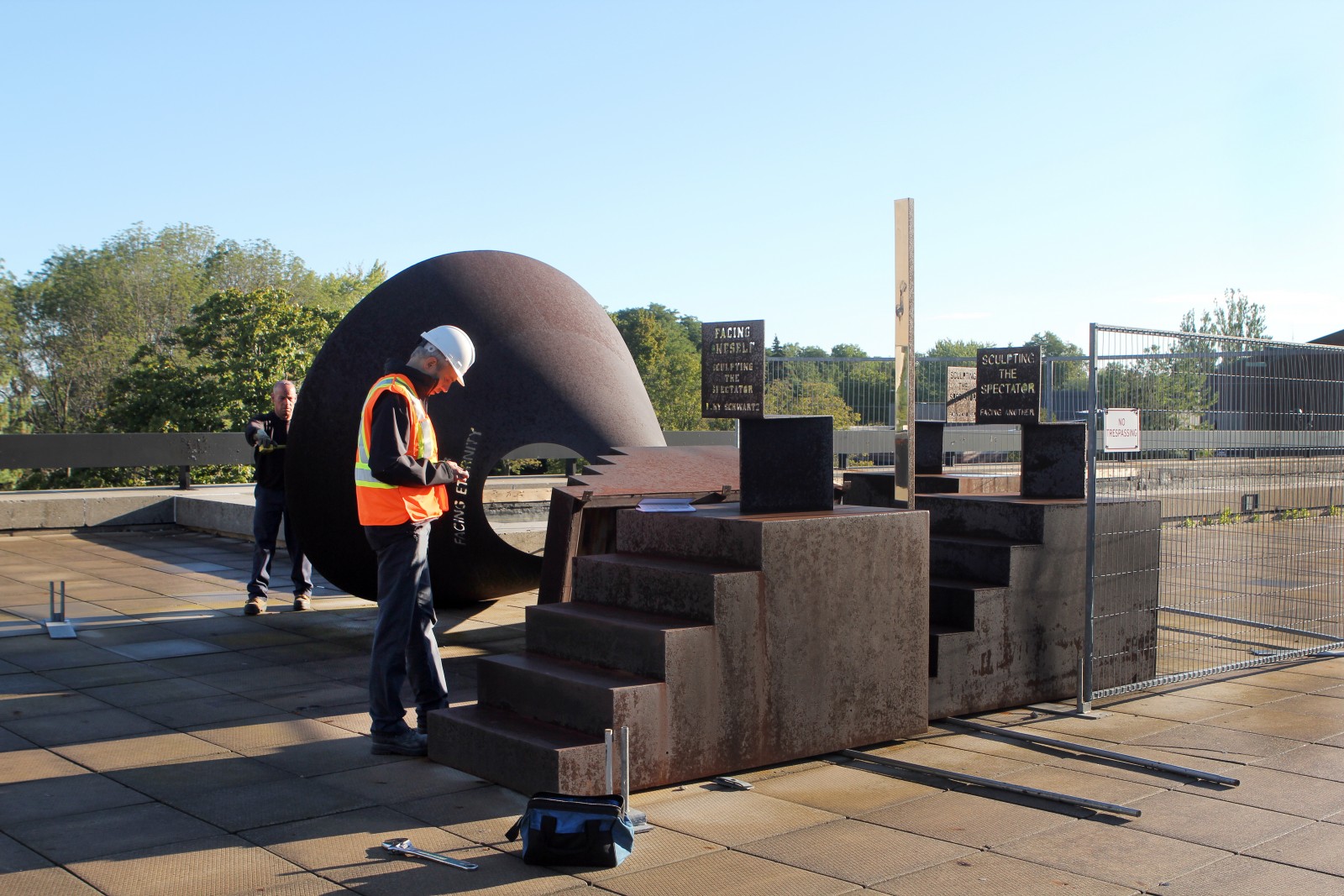 Brock University project manager Scott Roper is co-ordinating the move of the University's three Buky Schwartz sculptures from the main campus to the new Marilyn I. Walker School of Fine and Performing Arts.

Three Brock University sculptures that ask the viewers to reflect on themselves, others and the world around them have found a new home at the Marilyn I. Walker School of Fine and Performing Arts.

The Buky Schwartz collection of coreten steel sculptures Facing Oneself: Sculpting the Spectator, Facing Another and Facing Eternity – part of Brock’s Lutz Teutloff Collection of artwork – will be prominently displayed outside the lobby of the new downtown campus.

“These are very interesting pieces,” said Derek Knight, Director of MIWSFPA. “They are not static, they are not mute, they invite our interaction.

“I’m really looking forward to seeing how those pieces will inspire creativity and animate the space.”

He said he expects students will interact with the sculptures and be inspired by them.

Stuart Reid, Director/Curator of Rodman Hall Art Centre, said the three pieces are originally part of a commission of six that were on display in Lodz, Poland in 1993.

Until they were moved Monday, Brock’s three pieces of the collection were on display on the podium around Schmon Tower.

Reid said the new location will give them more prominence for students and the broader community.

“Outside the MIWSFPA, the work is beautifully situated,” he said. “They are quite important works by an internationally celebrated artist.”

Scott Roper, Brock project manager, orchestrated the move of the Buky Schwartz pieces Monday and 2000 Years on the Edge from Jubilee Court to outside the Plaza Building on Friday.

“Locating sculptures in places that are meaningful helps people to notice them, appreciate them and wonder about them – the context of the site contributes to the artwork and vice versa and allows the artistic intent to be expressed,” he said.

Roper said when other sculptures were moved on campus, including Concordia and Path of Possibilities, the artwork not only changed the landscape but also the impressions viewers are left with.

He’s confident the three Buky Schwartz pieces will do the same downtown.

“Moving them downtown to the MIWSFPA and placing them in a group, in a defined space, will change the way people perceive and interact with them,” he said.

John G. Hanhardt, a senior curator at the Guggenheim in New York, wrote an essay about Brock’s three Buky Schwartz pieces and his interpretation of the work. Here is an excerpt:

“In Facing Oneself: Sculpting the Spectator, the viewer confronts him/herself in a mirror to remember the responsibility we have as agents of our own free will, able to determine our response to what happens around us; Facing Another connects two viewing stations and invites viewers to reach out and establish a dialogue with each other; Facing Eternity places the viewer within a cone that directs one’s gaze to the sky, shaped by the sculpture as a portal to infinite space and time.” Workers prepare Brock University’s Buky Schwartz collection of sculptures for transport. They are being moved from the main campus to the new Marilyn I. Walker School of Fine and Performing Arts.