Badgers Do It For Doczy 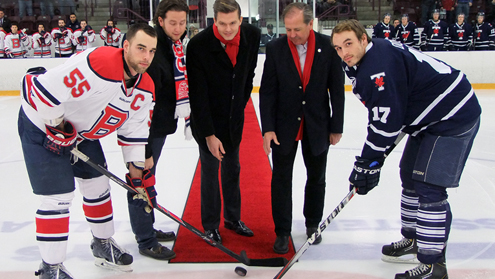 Hours before the game an anonymous donor stepped forward to cover the entire cost of the night’s guest of honour, Brock Badgers defenceman Milan Doczy, and his Interferon cancer drug treatment. The 24-year old Czech Republic native was recently diagnosed with melanoma skin cancer that had spread to his closest lymph nodes.

Friday’s contest was dubbed the ‘Do It For Doczy’ game and that’s exactly what the Badgers did, defeating the University of Toronto Varsity Blues 7-2.

Brock head coach Murray Nystrom had Doczy read out the starting line-ups in the dressing room before the game. It was also a chance for the former Owen Sound Attack blueliner to tell the team the good news.

“It’s not usually like me to step up and speak in the dressing room, but I told the guys the news – that an anonymous donor had come forward,” said an emotional Doczy.

From there, Doczy dropped the puck to a standing ovation as the 1, 075 fans in attendance roared in approval. Just over 24 minutes later Brock had a 4-0 lead and never looked back.

“Tonight was a night were hockey came second,” explained Radjenovic. “Tonight was about Milan. It was great to produce, I’ve been struggling the past six of seven games, but once again this was about the team winning for Milan.”

Nystrom was happy for his leading scorer, but also knew the final score was ultimately not what mattered.

“If the guys couldn’t get pumped for tonight they shouldn’t being playing hockey,” said the veteran Brock bench boss. “Win or lose, this night was about Milan. It was great to see (Radjenovic) break out – he’s put the weight of the world on his shoulders the past few weeks. But big players step up in big games. He’s going to be a great pro one day.”

Doczy, who also had job interviews with two major banks on Bay Street earlier in the day on Friday, was amazed at just how many people came together to support the ‘Do It For Doczy’ campaign.

“I’d like to thank this community, not just the Brock community, but everyone. To see what I’ve seen the past couple of months – there’s so many people to thank. Then to get the news about an anonymous donor, then to drop the puck in front of thousands of people standing and cheering for me. It was amazing.”

With the win Brock moves into seventh place in the OUA West standings and needs a single point Saturday night in Windsor to clinch a playoff spot.

“I don’t want to get into all the scenarios of who needs to win and lose, we just have to carry the momentum from tonight into tomorrow,” Nystrom said.

Badger Bits: Doczy also heard earlier in the week that his cancer had not spread any further.
Brock Chair of the Board, Mr. John Suk and Paul Dermody, Vice-President of Student Services, joined Doczy for the ceremonial faceoff.
Doczy’s original billets from his OHL days playing in Owen Sound, Sean and Tracy Walker, were also in attendance wearing their Doczy #3 Attack jerseys.
Sammy Banga had one goal and two helpers for Brock. Patrick Volpe two goals, while Jamie Kendra and Daniel Tanel added singles. Anthony Geldart added three assists for the Badgers. Clint Windsor picked up the win making 31 saves.