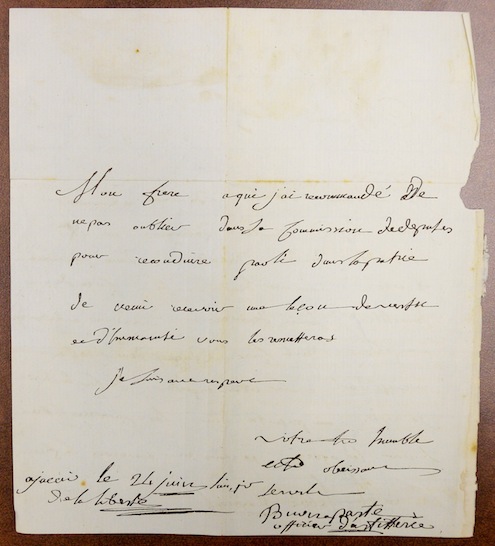 The history in and around Brock University is immense. Canada’s history in a lot of ways was formed right here in the Niagara region.

The University itself was named of course after Sir Isaac Brock.

So when a document with the signature of “Napoleon” surfaced in the Brock Library you can imagine the excitement surrounding it. David Sharron, head of Special Collections and Archives at Brock University said it all began with a donation to the University from an anonymous donor.

“This collection has been here for awhile and came in several boxes,” explained Sharron. “We were expecting 50 or so books. Underneath one large book was an envelope with a letter inside. We opened it up and we’re like ‘is that really Napoleon’s signature on it?’ We gravitated to that right away.”

From there Catherine Parayre, director of French Studies at Brock, entered the picture. In fact it was a chance meeting at Congress last spring that confirmed the find was indeed the real deal.

“It was during Congress and a coincidence really,” said Parayre. “Philippe Nieto (National Archives Paris) was here and he eventually met with David, and then I had a chance to meet with Nieto before he left Congress. We both looked at the letter and we both said ‘this is authentic.’

“(David) kindly gave a copy so Philippe could take it back to the archives in Paris and he asked one of their experts to examine and transcribe the letter. The expert confirmed it was Napoleon – not just someone signing Napoleon.”

The Napoleon signature wasn’t the only significant find. There was another letter from a different donation.

“While Philippe was here I began to show some other french language materials in the Special Collections,” Sharron said. “A letter pressed between the pages of the history of Freemasonry in France also caught the eye of Nieto and Parayre.”

“There were so many books, including a lot of books on Freemasonry, and we were looking and then I saw this other letter and I noticed it was written by a woman which was super interesting because it was written in 1825, at a time when woman were not writing a lot,” added Parayre.

Which brings us to the workshop – “Napoleon and a Woman at Brock – where the two letters will be put on display for the Brock and Niagara communities to marvel over.

Both Parayre and Sharron are ecstatic over the no cost, bilingual, event.

“I decided to have the workshop, with David’s enthusiasm and permission, for two reasons. One is that this year, Ontario commemorates 400 years of French presence. So why not start 2015 with this especially since we have those documents? The other reason is, as the director of French Studies, to work with Special Collections and meet over different topics.”

“We hope to inspire who ever comes to the workshop,” said Sharron. “One letter here can become the subject of an entire thesis. You might be looking at something that no one has never seen or studied before and it can spin off into a collaborative event like this turned out to be.”

“The research around these two small letters involved international travel, international cooperation. It’s teamwork, but also a detective story. This is a celebration,” Parayre said.

The ‘Napoleon and a Woman at Brock’ workshop takes place Thursday Jan. 22 from 12 to 1 p.m. in the Brock Library, 10th floor – Special Collections and Archives.