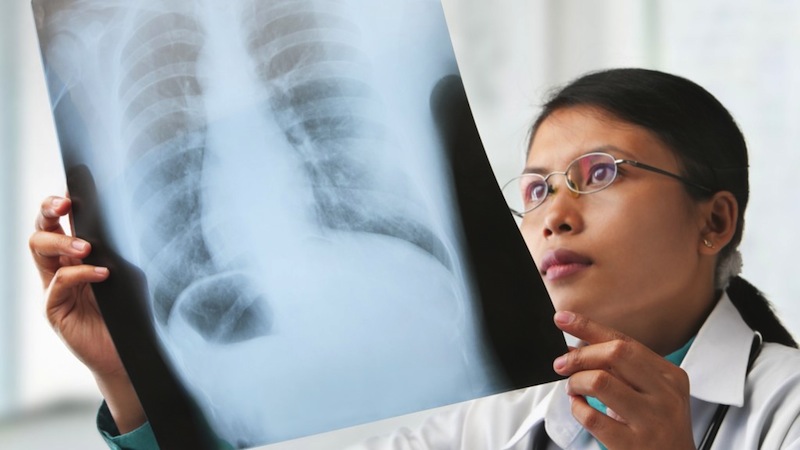 Smokers, take note. There’s an image that could alarm even the hardest core into giving up the vice for good.

It’s a computer tomography (CT) scan of the smoker’s lungs. The more serious the CT results, the more likely a smoker will be to quit smoking, according to new research by Brock University epidemiologist Martin Tammemagi, published May 28 in the JNCI: Journal of the National Cancer Institute.

Tammemagi and colleagues used data from the U.S. National Lung Screening Trial on 14,621 current smokers, 55 to 70 years old, with a 30 or more pack-a-year smoking history and who had smoked during the last 15 years. The researchers excluded participants who developed lung cancer during follow-up.

For smoking information, the authors used the results of annual study updates starting at one, two, and up to seven years later. Researchers found that the more serious the screening result, the greater the likelihood that smoking stopped. In addition, the effect appeared to be durable, lasting up to five years after the last screening.

“There’s a long, long list of diseases caused by smoking – cardio-vascular and respiratory diseases being two examples – that are not related to lung cancer or even cancer,” says Tammemagi. “Quitting smoking will reduce risk of these diseases and for some of them improvements can be seen within a week of stopping smoking.” In related research published May 27 in the British Medical Journal (BMJ), Tammemagi reports that if people who are at high risk of lung cancer receive low dose computer tomography (CT) screening, mortality from lung cancer death can be reduced by 20 per cent.

“This is one of the biggest breakthroughs that we’ve had for decades in terms of reducing lung cancer mortality,” says Tammemagi. “Although lung cancer screening is not free from side effects and complications, it appears that we should attempt to introduce and evaluate CT lung cancer screening in a gradually phased-in, well thought out manner ” Tammemagi goes on to say.

In early 2013, he launched a calculator that predicts the likelihood of someone developing lung cancer, and thus determining if they might benefit from lung cancer screening.

Also, Tammemagi created risk calculation software that can reduce surgical procedures by helping doctors know if nodules showing up on CT lung scans have a high probability of being cancerous.