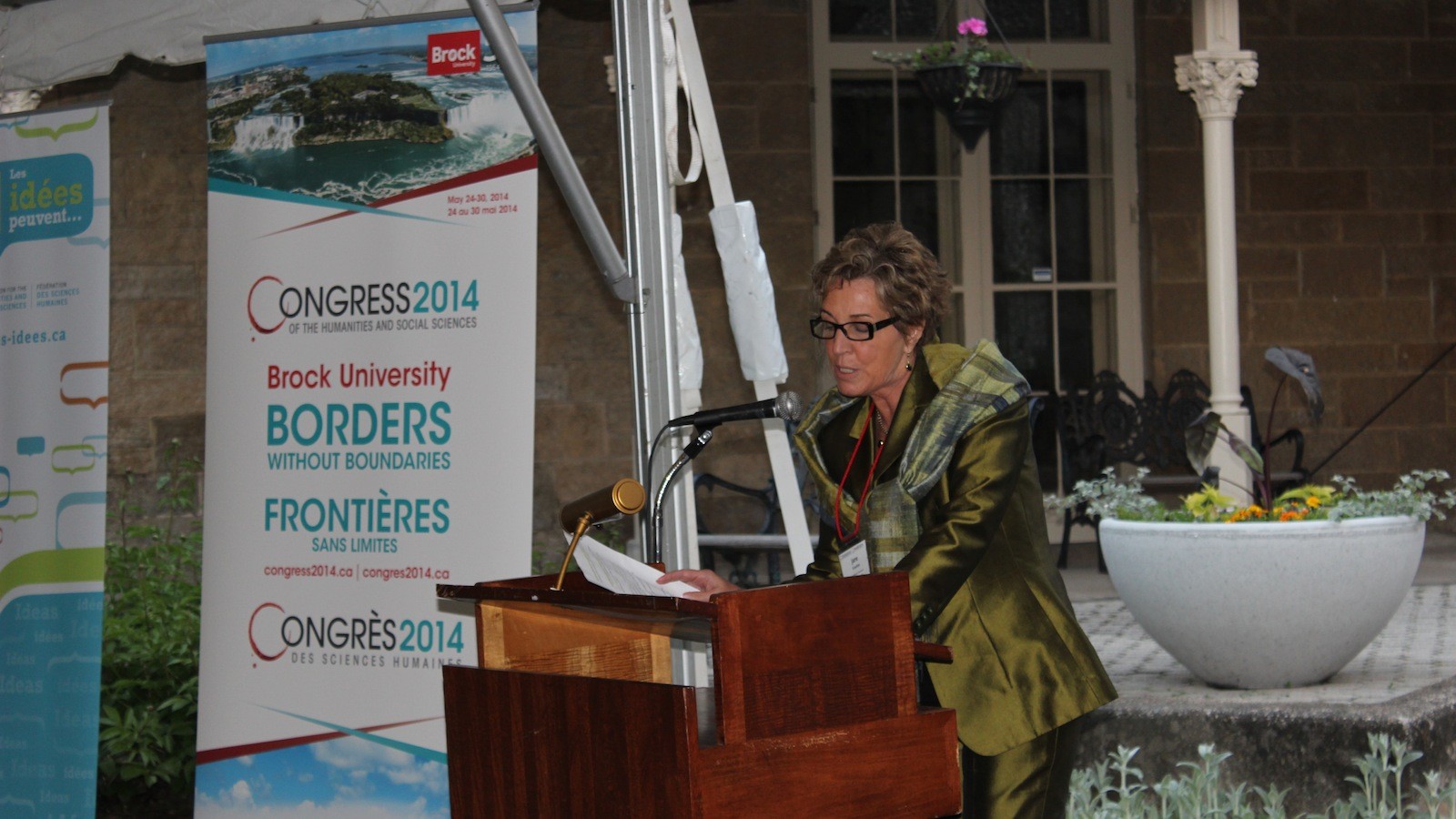 Jane Koustas, Brock's Academic Convenor for Congress 2014, at the May 23 opening reception at Rodman Hall Jane Koustas, Brock's Academic Convenor for Congress 2014, at the May 23 opening reception at Rodman Hall

Organized by the Federation for the Humanities and Social Sciences, Congress brings together more than 8,500 scholars, students and policy-makers to share ideas and shape the Canada of tomorrow.

The event opened with a performance by the Ohnia:kara drum group in a tent set up for the occasion behind Rodman Hall.

In his welcoming remarks, Brock President Jack Lightstone welcomed all of those in attendance and encouraged everyone to feel at home. He also spoke about the uniqueness of Niagara’s location on an international border and to the significance of boundaries between cultures and academic disciplines.

Lightstone’s remarks were then followed by a Territory Welcome from Gary Parker of the Tonawanda Seneca Territory.

The theme of Congress 2014, “Borders without Boundaries” focuses on the links between communities and universities, on U.S.-Canada relations, on dynamics between rural and urban spaces, and on the creation and dissemination of knowledge in the digital world.

“This year’s theme reflects the opportunity that Congress brings to explore ideas, beyond traditional boundaries – disciplinary, historical, cultural or social,” said Antonia Maioni, President of the Federation for the Humanities and Social Sciences. “And it seems to me fitting that we’re able to do this here at Brock, this is what Brock does best.”

Congress consists of eight days of meetings, panel presentations, keynote speeches, and more than 2,500 events. This year’s gathering will feature more than 10,000 papers presented by delegates from 75 associations. Beyond the academic discussions, a wide array of panels, performances and exhibits will be free and open to the public.

“The Congress for me is the spring harvest,” said Chad Gaffield, President, Social Sciences and Humanities Research Council. “We invest in research and the development of talented people and we try to make connections across society, but the Congress gives us a chance to really se the fruits of those investments.”

The event attracts delegates from every province and territory, the U.S., and around the world. It also has the potential to pump millions of dollars into the local economy.

The Ottawa-based Federation for the Humanities and Social Sciences says Congress puts between $9 million and $12 million into the local economy, based on spending that includes hotel rooms, meals, transportation, tourism, shopping and so on.

Congress 2014 at Brock by the numbers