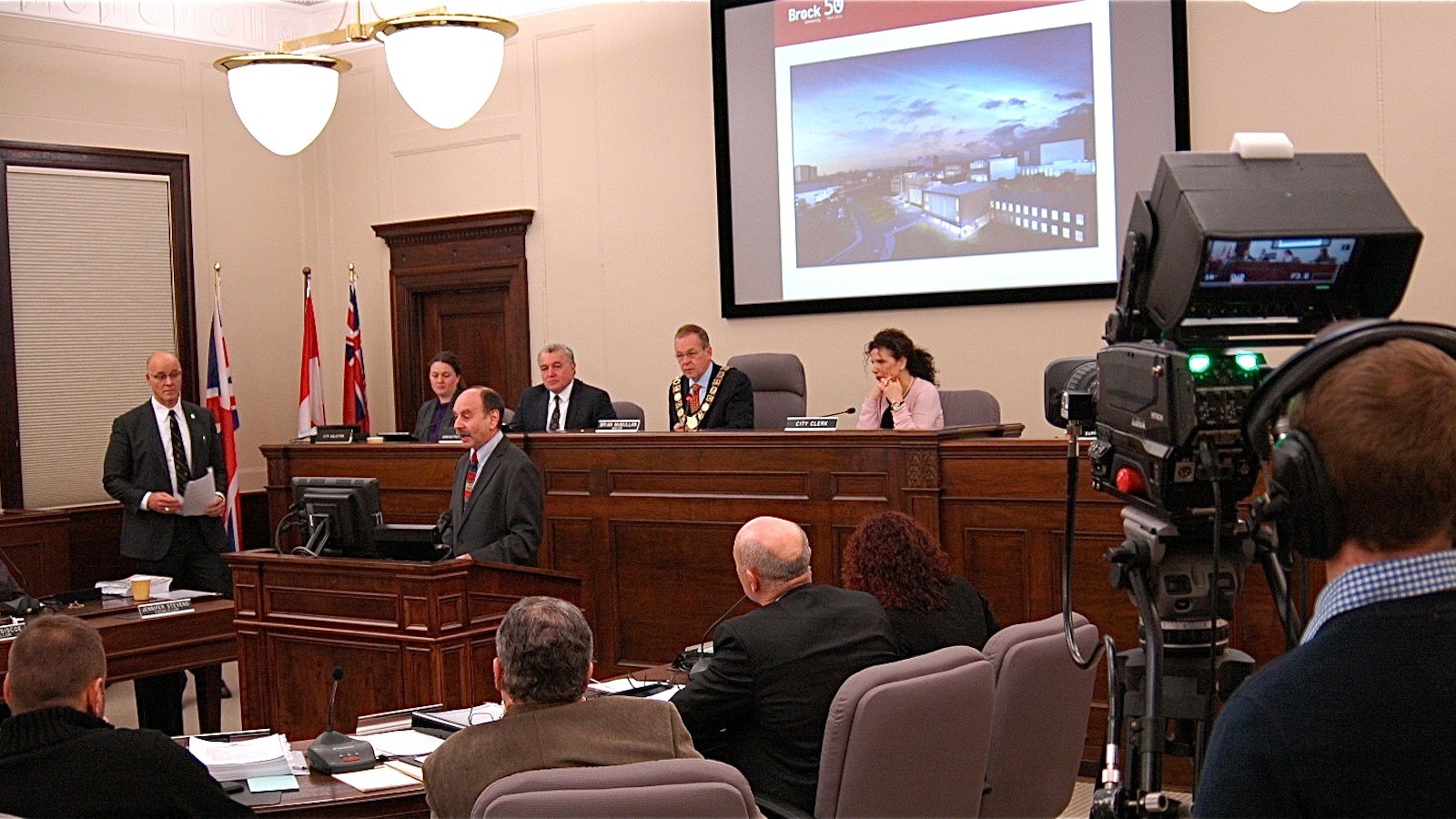 The construction of Brock University’s new arts school in downtown St. Catharines has passed the midway point, as workers have kept the major project moving along despite this winter’s harsh weather.

Three senior University officials appeared before St Catharines City Council on Monday Feb 10 with an update on the $45-million project that will house the Marilyn I. Walker School of Fine and Performing Arts.

And their news was good.

“We’re on time, and we’re on budget,” said Brian Hutchings, Vice-President of Finance and Administration, who joined President Jack Lightstone and Humanities Dean Douglas Kneale for the council presentation. Hutchings said the Walker School is still scheduled to be open for September 2015.

Lightstone, who first proposed the idea of twin downtown arts projects when he appeared in the same council chamber seven years ago, said the urban-centre location lets the University play a role in helping local communities. The University and City worked together to find a site for the Brock project in an industrial heritage building, the former Canada Hair Cloth plant.

“Brock University is proud to be a partner and supporter of St Catharines, and indeed of Niagara,” said Lightstone. “For years Brock has publicly stated that one of our top priorities is to help strengthen our host communities intellectually, socially, culturally and economically.”

Kneale said creating a new centre of learning in the shell of an old industrial site is a “perfect metaphor” that will help future generations become part of Canada’s billion-dollar cultural sector.

“We are taking a 19th-century textile factory and turning it into a state-of-the-art facility for more than 500 students,” said Kneale. “Opportunities like this happen but once in a lifetime.”

As part of the presentation, city councillors viewed a video presentation on the project done by Tracy van Oosten, a Brock graduate of visual arts and film studies.

At the worksite, the full footprint of the Walker School is now visible. The main structure for the project’s new construction – mainly, the new dramatic arts theatre – is up, and now workers will largely focus on the complex interior work in all of the buildings, the most time-consuming being the renovation and repurposing of the older structures.

The University and City arts projects were the initial catalysts of a massive downtown renewal initiative, which now also includes the Meridian Centre, a 4,500-seat ice rink and spectator facility expected to be completed this autumn.