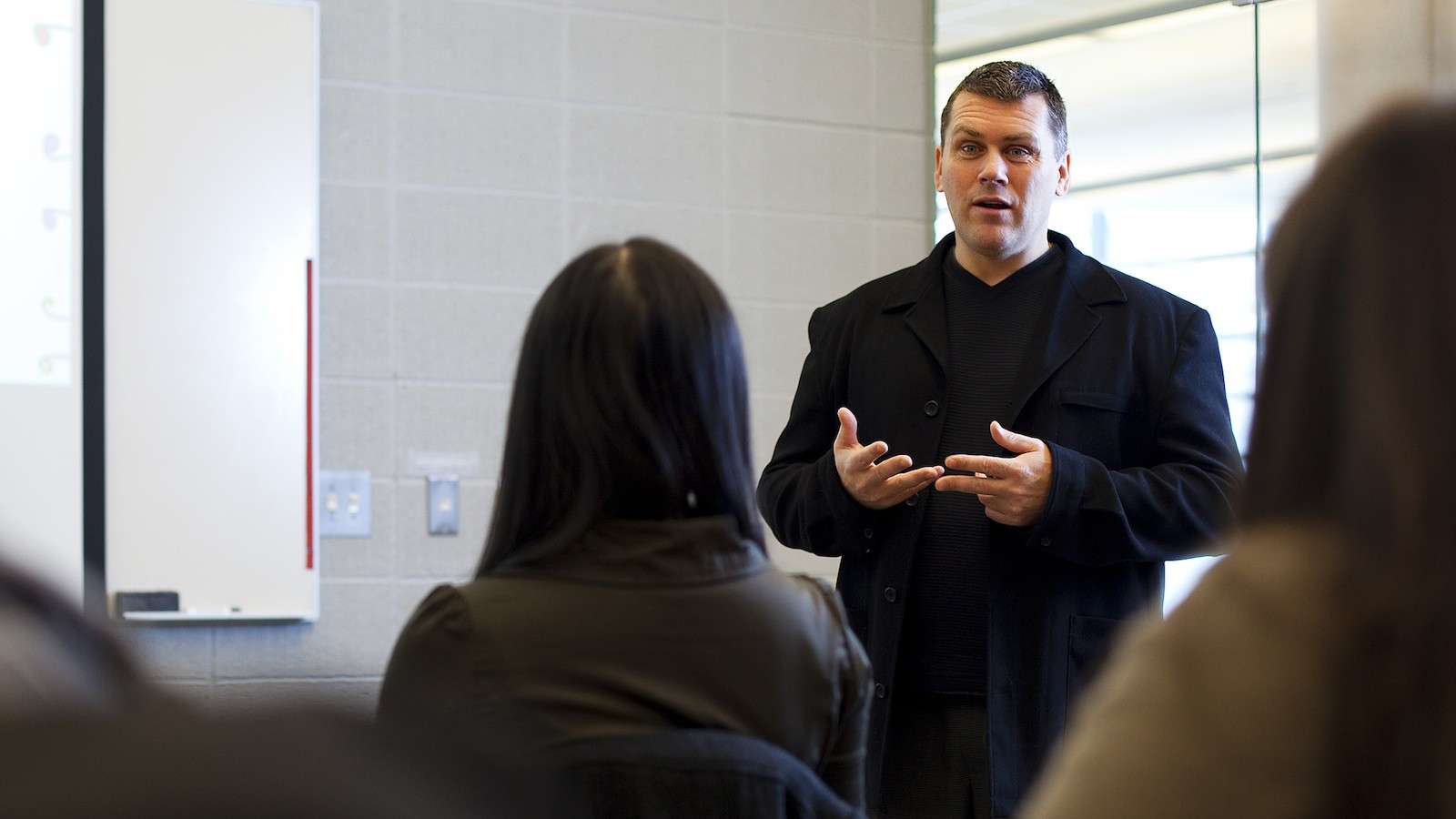 Brent E. Faught describes his teaching style as that of a helper. He strives to make concepts and theory obvious, not ambiguous; his classroom inviting, not intimidating; and his lectures challenging without compromising the self-esteem of his audience.

But most of all he wants learning to be fun and fulfilling for his students.

The Ontario Confederation of Faculty Associations (OCUFA) recently recognized the 47-year old professor of epidemiology and chair of Brock’s Department of Community Health Sciences with a teaching award for his work with students.

When asked about the significance of the award for him personally, Faught comments that the recognition shines a spotlight on the importance of teaching at the University.

“I think it’s great for Brock,” he says. “In today’s day and age with all the competition that Ontario universities have in attracting the top students, I think it’s just another feather in the university’s cap. If it draws some attention to our institution in terms of attracting more quality students in the future, then that’s a great thing.” One of his former students notes: “Dr. Faught’s teaching can be summarized with two distinctive observations, it is student-centered and it is catered to build self-efficacy in his students; both of which are intentional.”

Faught is also an accomplished researcher in the area of physical activity epidemiology and has taught and supervised students at the undergraduate, master’s and PhD levels. But for him there is no separation between teaching and research since he views both activities as part of the same student-centred continuum.

“When I come to work I’m teaching and I’m doing research,” he says. “My research bleeds into my lectures and my teaching often results in pursuing new research initiatives with my students. I like to just think I’m doing the job of a professor, and the one interacts with the other.”

The same goes for teaching and learning. Faught has earned two of his five professional degrees from Brock – BEd (1992) and BPhEd (1989) – and he is currently working on his MBA at the University’s Goodman School of Business. For him, being an effective professor means never giving up on the learning side of things.

“You’re learning every day, and it’s not necessarily from the professor down the hallway, or some colleague in another part of the world,” says Faught. “You’re in contact with students on a daily basis, you’re constantly learning from them, but you’re also learning about the student, how they think about things, how they’re comprehending information, and you’re always wondering to yourself ‘can I do a better job or is there a better way to do my job?'”

Every year OCUFA recognizes outstanding teachers and academic librarians in Ontario universities through its Teaching and Academic Librarianship Awards. Approximately seven awards are presented every year.

Anna H. Lathrop, Vice-Provost, Teaching and Learning, who is also the recipient of an OCUFA Teaching Award (2001) and a 3M National Teaching Fellowship Award (2001), nominated Faught for the award.

“The personal knowledge of a learner’s struggle and challenge lies at the heart of almost every decision in the evolution of Brent Faught’s teaching career,” says Lathrop. “We’re extremely proud of his accomplishments. The real beneficiaries of his ongoing commitment and dedication to teaching are our students here at Brock.”