Faculty and students rock out during Friday lunchtime concerts 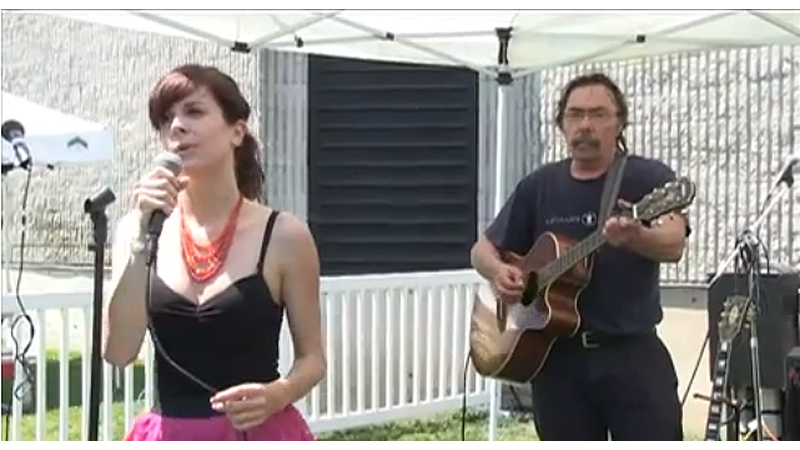 Michelle Przedborski and Tomas Hudlicky are just two of the bandmates who make up pH Six. The band, made up of faculty and students, performed recently in Jubilee Court during the Brock Farmers Market. Michelle Przedborski and Tomas Hudlicky are just two of the bandmates who make up pH Six. The band, made up of faculty and students, performed recently in Jubilee Court during the Brock Farmers Market.

They know their way around a science lab but they’re just as comfortable on a stage.

Meet pH Six, a rock band of science professors and students who can sing, shred, tickle the ivories and pound the skins with as much ease as they can carry out the scientific method.

The group is made up of students Mikel Ghelfi (piano) and Lee Belding (bass), both chemistry graduate students, Michelle Przedborski (lead vocals), who is doing her master’s in physics, Jeff Reiger (guitar), a chemistry undergrad, and Costa Metallinos (drums), chair of the Department of Chemistry, and Tomas Hudlicky (lead guitar), a Canada Research Chair in biocatalysis. Recently, pH Six rocked out in Jubilee Court as part of a series of faculty and staff summer musical performances during the farmers market on Fridays.

Watch the video of their performance

It’s not the first band Hudlicky and Metallinos have played in together. The duo has jammed with other students since 2004.

But most in the group began exploring their musical abilities long before stepping foot in a science lab or teaming up on stage. Some of them are even self-taught musicians and play more than one instrument.

“I’ve been singing since I could open my mouth,” said Przedborski, a Vanier Scholar, who has taken vocal lessons. “My mom tells me I used to sing in the bathtub (as a young child).”

Still, all have stuck with music, no matter how busy their studies have become. For most, it’s a way to unwind from the pressures of lab life.

“For me, it’s just relaxing,” Ghelfi said. “You come home and do this and you get a free mind from doing it.”

For Przedborski, music allows her to express herself in a way her schoolwork doesn’t.

“I write songs, too, and it allows me to channel my emotions and put it down on paper,” she said.

Bassist Belding finds his musical outlet helps him focus in the lab.

“If you take a step away from what you’re doing, from solving a problem, this is one of those outlets you can use to step away and come back (to the problem) fresh,” he explained.

And Reiger is certain playing the guitar ensures he has a life outside of school.

“It’s probably a good way to have a social life,” he said with a smile.

Metallinos, who started playing the drums nine years ago, said music has reinforced the need to constantly learn new things and push himself to improve his skills.

“As in anything in life, there are bound to be people better than you at something and it’s from those people that you should strive to learn,” he said.

For Hudlicky, known by the stage name T-Hud, strapping on a guitar isn’t that different than life in the chemistry lab at all.

“It’s related to what I do in chemistry,” Hudlicky said. It’s putting things together in a semi-creative way so it’s not that different from chemistry. It’s a lot easier being a chemist than a guitar player.”

Check out some of Brock’s other talented musical staff and faculty when they take to the microphone in Jubilee Court during Brock Farmers Market Fridays: