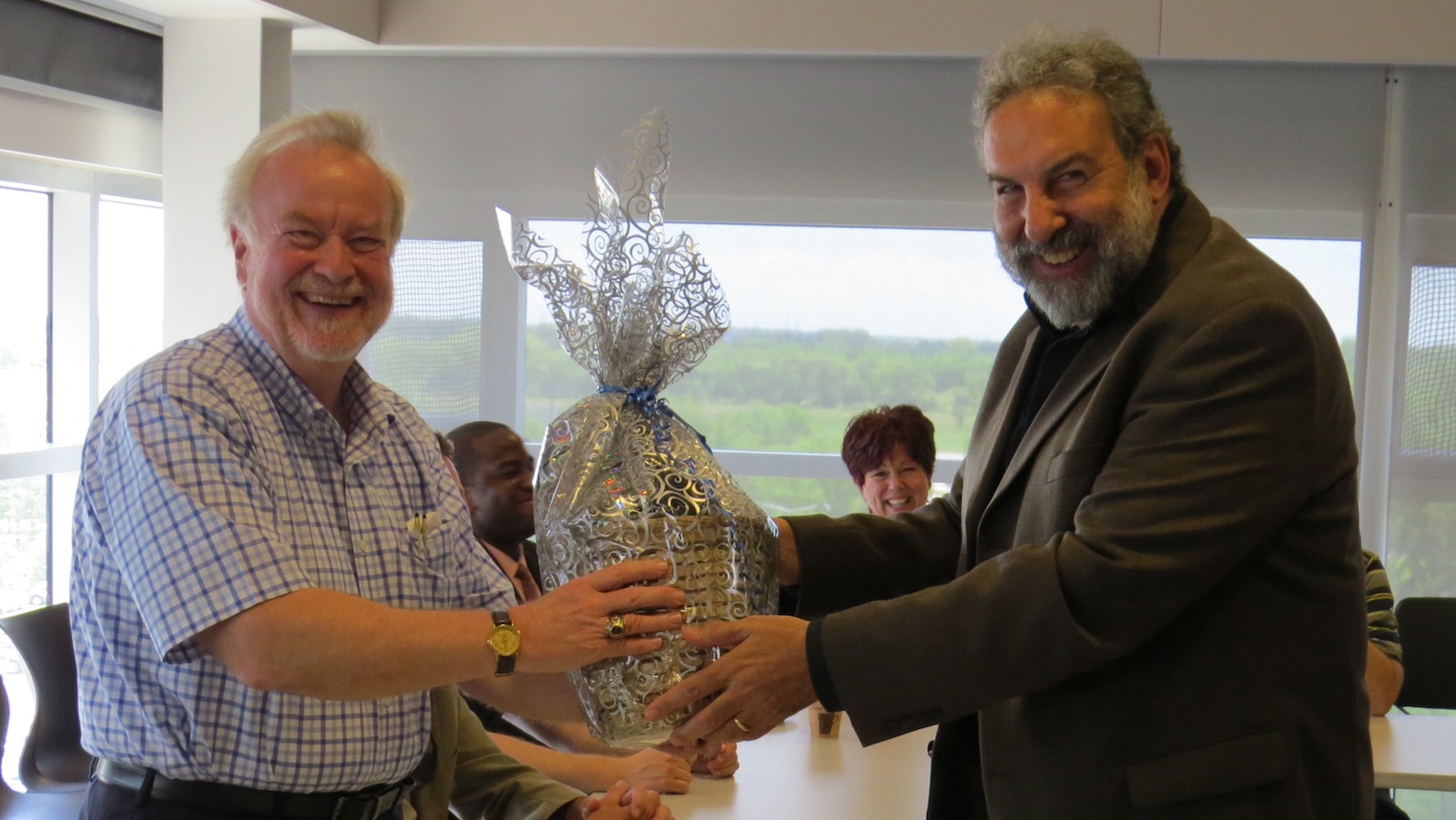 David Siegel (left) finishes his term leading the Niagara Community Observatory on June 30. He's seen here receiving a token of thanks from Gary Libben, Vice-President of Research, for his work creating and leading the research initiative.

It all started at an informal meeting six years ago when the head of the Regional planning department, a senior staffer from the University at Buffalo and David Siegel discussed the idea of a Niagara “think tank,” to be housed at Brock.

Siegel, then Brock’s Dean of Social Sciences, was intrigued.

Having an academic institute that would provide balanced, non-partisan research driven by – and provided to – the community was something that excited Siegel.

In 2008, a half-day session attended by dozens of Niagara politicians, civil servants, local organizations, businesspeople and other community members laid the groundwork for what was to become a regional landmark: the Niagara Community Observatory (NCO).

Fast forward five years. As he prepares to vacate his position as the NCO’s founding director, David Siegel looks back to the beginning and how far the observatory has come as his term at its helm comes to a close June 30.

“I think it was very important to show Brock’s commitment to the local community,” recalls Siegel. “I knew from talking to people in the community that there was a strong need for additional research to be done about the Niagara area in order to support the activities of many of the not-for-profit agencies that were working in the area.”

Based on the public feedback from the earlier half-day session, the committees formed the mission and goals of the NCO, which are to work in partnership with the Niagara community to foster, produce, and disseminate evidence-based research on current and emerging issues.

The group was keen to get moving. Its first research brief – The Young Are the Restless: Attracting and Retaining Young People in the Niagara Area – was released in March 2009, the same month that the Niagara Community Observatory became official.

Since then, the NCO has produced 15 research briefs on everything from farmers’ markets to social media to the state of Niagara’s lakes and rivers.

“Prof. David Siegel has done an extraordinary job in bringing this initiative into existence and in creating the partnerships and track record of excellence that have had impact across our communities,” says Gary Libben, Vice-President Research.

“I know that I speak for all our colleagues and community partners in expressing gratitude for his extremely valuable contribution to Brock and to Niagara.”

Siegel recalls the impact of one brief in particular, released in November 2010, called “More than Fun and Games: Sport’s Contribution to Niagara’s Economy and Wellbeing.”

“I was talking to someone the other day who was saying that the methodology that was described in that report is now being widely used among a number of local groups to identify the economic impact of particular local events in the sports area,” he says.

The September 2012 launch of the NCO brief, “Poverty and Education: A Niagara Perspective,” involved a panel of representatives from community organizations speaking to the various themes of poverty and education.

Mike Lethby, executive director of the youth drop-in centre The RAFT was one of those speakers, sharing the impact of poverty on Niagara’s at-risk youth.

Lethby says the poverty brief and other NCO research supports community groups as they seek funding.

“The NCO has a credibility factor to it that can actually verify some of the things we are saying,” he adds. “NCO takes an issue from the anecdotal and applies a bit more of a research rigour, which then makes for a more credible presentation to the community and government.”

Lethby says dealing with Siegel has challenged the stereotype of the “apart and isolated” professor who is focused primarily on numbers and research.

“Dave has a real social personality that allowed him to connect with the issues and the people involved,” he says. “To have someone like Dave make the connection across the personal level, that was invaluable.”

Darlene Ciuffetelli Parker agrees. The associate professor in the Department of Teacher Education says the support from the NCO – and Siegel in particular – were invaluable as she wrote and presented the September 2012 poverty and education brief.

“Dr. Siegel organized the process at every stage, from the manuscript review to the invitation of important persons across Niagara for a well-organized and equally well-attended panel symposium,” says Ciuffetelli Parker. “The result was a rich discussion across disciplines, organizations and people hoping to make sense of poverty in Niagara.”

“His ability to bring critical issues to the forefront in Niagara indisputably is a gift to our community,” she adds. “His passion for humanity and the well-being of citizens in Niagara is evident in all he does.”