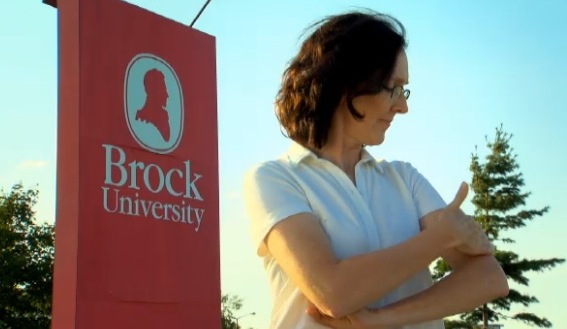 A Brock University medical entomologist will be part of a new Canadian-made documentary about mosquitoes airing this week on the CBC’s long-running science series The Nature of Things with David Suzuki.

The episode, ZAPPED: The Buzz About Mosquitoes, featuring Fiona Hunter, professor of biological sciences, will air this Thursday, Jan. 17 at 8 p.m.

The show, which has been more than two years in the making, will provide an up-close look at the increasing power these tiny insects have to survive, adapt and unwittingly spread disease around the world in the process.

“The focus of the program is that there are hundreds of mosquito species out there and not all of them carry diseases, some of them are just pests,” says Hunter. “But some of them we definitely need to watch out for.”

During the summer of 2011, Hunter took part in filming for the project in her old lab in the Mackenzie Chown Complex, at her farm, and at Entomogen, a St. Catharines-based environmental consulting and scientific research firm established in 1999 by Hunter and Mike Bidochka, also a professor of biological sciences at Brock.

This past summer, the film crew came back to town to get a few last-minute shots of Hunter in action in order to finish off the project.

“By this point, they had already done an immense amount of filming,” says Hunter. “They just needed to come back this past summer to tweak things a little more.”

“There were some shots that they just could not get,” she says. “They couldn’t get any good shots of swarms of mosquitoes.” Hunter explains that in a YouTube video that the show’s producers have posted online to promote the documentary, she is seen using a sweep net to capture mosquitoes so that the producers could film close-ups of the insects.

“We actually put dry ice down in the valley to try and draw them in,” says Hunter. “But we only got two or three mosquitos.”

“One of my former PhD students then reared mosquitoes for the producers, to help them get the specific shots that they needed,” she says. “She did that out of her garage in Fonthill because that was during the move of my lab into the Cairns Complex earlier this summer.”

“There’s been a really big Brock component to all of this,” adds Hunter.

Several current and former Brock students, who have worked and studied under Hunter, took part in the making of the documentary. Many of these students have also gone on to become leading medical entomologists and mosquito experts in Canada and around the world.

“We couldn’t have made the documentary without Fiona,” says Alan Burke, the director of ZAPPED.

“Right from the get-go, she welcomed us over to Brock to answer all our questions. She opened up her lab to us and introduced us to other entomologists,” he says. “Throughout the project, she was our go-to person for information about mosquitoes’ life-cycle and natural history, as well as West Nile surveillance.”

“Plus, she and her students supplied us with mosquitoes,” adds Burke, “and some bodies willing to be bitten!”