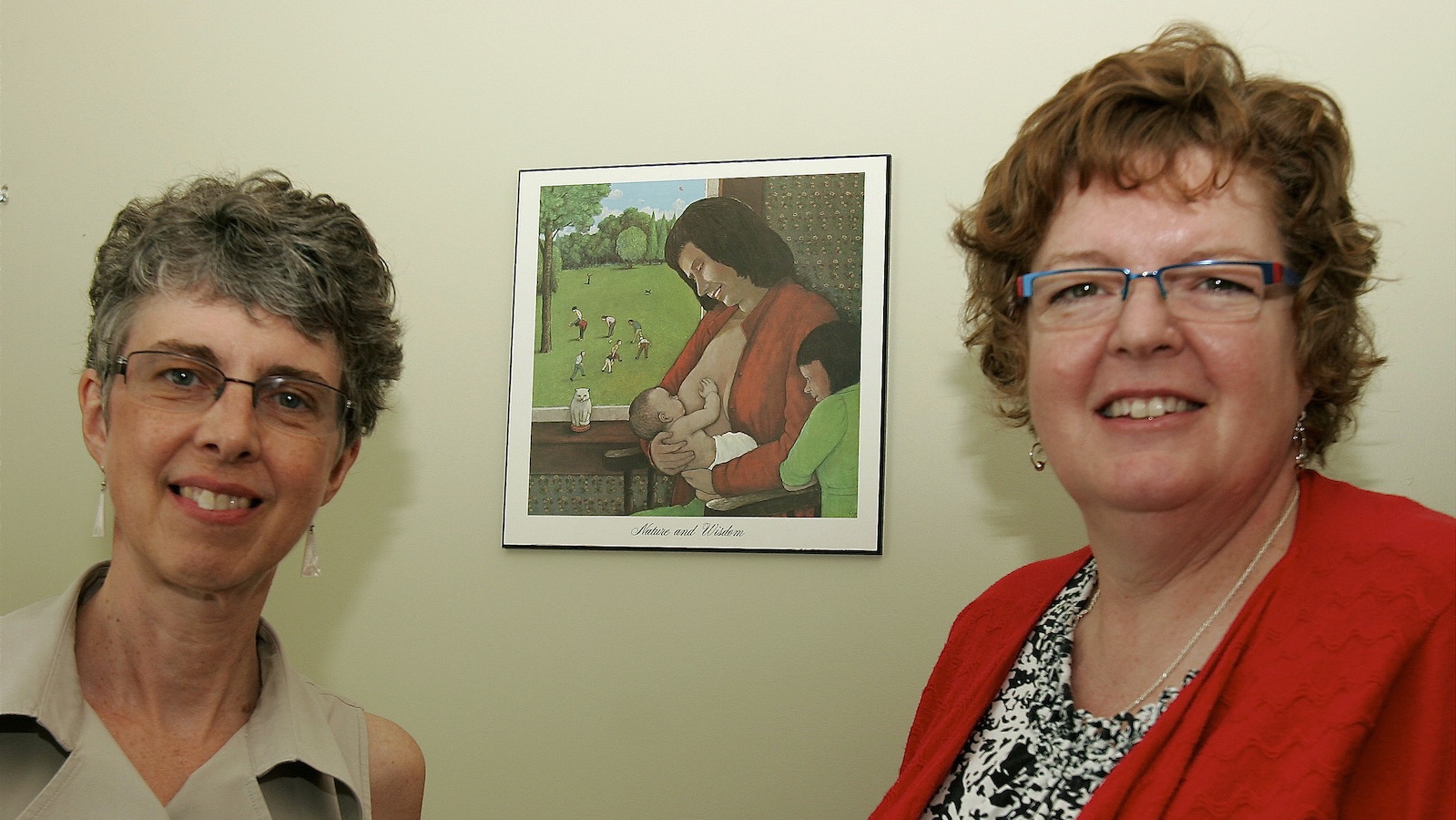 Lynn Rempel (left) and Lynn McCleary in the Department of Nursing recently studied the impact of new breastfeeding guidelines on nurses’ attitudes toward the practice.

Many considered the May 21 issue of Time Magazine to be scandalous: a young mother staring dreamily into the camera, a rather large toddler tip-toeing on a chair, attached firmly to her breast.

Some squirmed in their seats when viewing the image of the mother breastfeeding the relatively older child. But for nursing associate professor Lynn Rempel, the picture was a breakthrough of sorts.

“Talk about raising awareness!” she says. “The ones who did not even realize that it (breastfeeding older children) was an option are now informed that it is a possibility and that people in North America do it. There are a fair number of ‘closet breastfeeders’ – they won’t tell anybody they’re breastfeeding after a year and a half.”

That’s because there’s what Rempel calls a “disgust factor” towards older children who go to a mother’s breast rather than a sippy cup for their milk. There’s also a false belief that older children who are nursing have an unhealthy psychological attachment to their mother, she says.

Longer-term breastfeeding is an issue close to Rempel’s heart and a theme she and fellow nursing researcher Lynn McCleary explored in the paper they published recently.

The researchers worked with the Registered Nurses Association of Ontario (RNAO) to evaluate the effectiveness of the organization’s Breastfeeding Best Practice Guideline. The guideline’s recommendations are meant to teach nurses how best to assess, educate and support mothers to breastfeed starting from birth.

Of particular interest was the World Health Organization (WHO) recommendation of exclusive breastfeeding for the first six months, followed by breastfeeding and complementary feeding for two years and even beyond.

Long-term breastfeeding is thought to reduce breast and cervical cancers in mothers and increase nutrition in babies.

Rempel and McCleary surveyed nurses’ attitudes and practices one year before the guideline was implemented by nurses at Niagara Region Public Health in 2007, and then one year after the guideline’s implementation.

Rempel says that pre-guideline, nurses were largely not in favour of long-term breastfeeding.

“There are a lot of people in North America, who don’t like that idea of the long-term breastfeeding – nurses, same thing,” she says. “So even public health nurses who were supposed to know the WHO recommendation before were on board with breastfeeding for six to nine months, then it started to drop down.”

“A year later, nurses’ support for long-term breastfeeding had gone up significantly,” says Rempel. “For each of the time frames after 12 months, support increased. The nurses, because of the guidelines, were becoming more positive about the idea that women should breastfeed for that two years and beyond.”

The research also shows that, after the guideline’s implementation, mothers who were still breastfeeding at six months intended to continue breastfeeding longer.

The research concludes that if nurses promote long-term breastfeeding consistently and pervasively as outlined under the RNAO’s Breastfeeding Best Practice Guideline, that would influence mothers to extend their breastfeeding term.