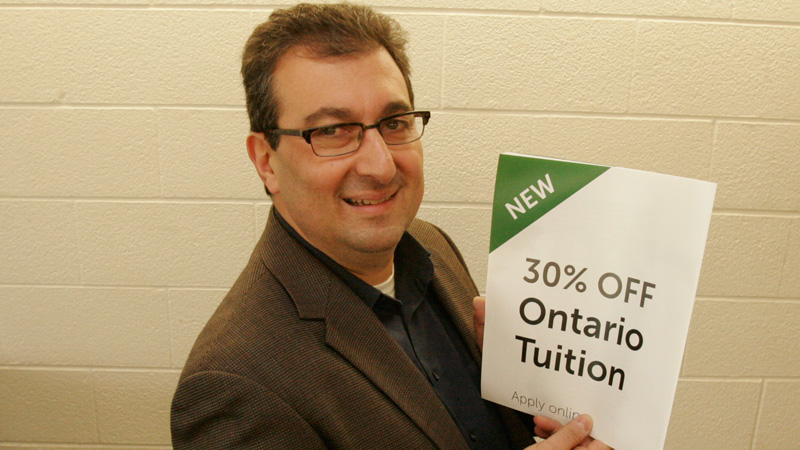 Rico Natale, director of Student Awards and Financial Aid, is encouraging students to see if they apply for 30 per cent off their tuition. Rico Natale, director of Student Awards and Financial Aid, is encouraging students to see if they qualify for 30 per cent off their tuition.

Brock is encouraging students to check out the new “30 per cent Off Ontario Tuition” program to see how it impacts them.

The University has launched a new webpage for the grant. The web application for students not receiving OSAP went live on the province’s “30 per cent Off” website at 10:30 a.m. on Thursday.

The program grants eligible full-time undergraduate students a credit equivalent of 30 per cent of the average college or university tuition costs. For 2012, students will be eligible for a credit of up to $800 for the winter term. Starting in September, the grant will pay up to $1,600 per fall/winter session at Brock. The deadline to apply is March 31, 2012.

You are eligible if:

If you have applied for OSAP this year, you don’t need to apply for the program. Luke Speers of BUSU, right, met with Glen Murray, Minister of Training, Colleges and Universities, at a press conference on Thursday.

Luke Speers, Vice-President of Finance and Administration at the Brock University Students’ Union, said the grant is an important step to reducing financial barriers to education. But he wants to make sure those who aren’t receiving OSAP know that they have to apply to get it.

“We’re working very hard to ensure that all students at Brock have an opportunity to take advantage of this new program,” he said.

The program is a trade off, he said. The government is eradicating three other programs — the Textbook and Technology Grant, Queen Elizabeth II Scholarship and the Ontario Trust for Student Support, worth about $78 million combined — to offer the 30 per cent one. But Speers said he can live with that.

“On net, there’s still a lot of new funding coming into the system.”

Rico Natale, director of Student Awards and Financial Aid, said students who think they might be eligible need to go to ontario.ca/30off. Brock is also distributing posters, bookmarks and other materials to inform students. The Ministry of Training,Colleges and Universities will also be sending “street team” members to campus later this year.

16 comments on “New program offers 30 per cent off tuition”