Rock at Brock 40 years ago 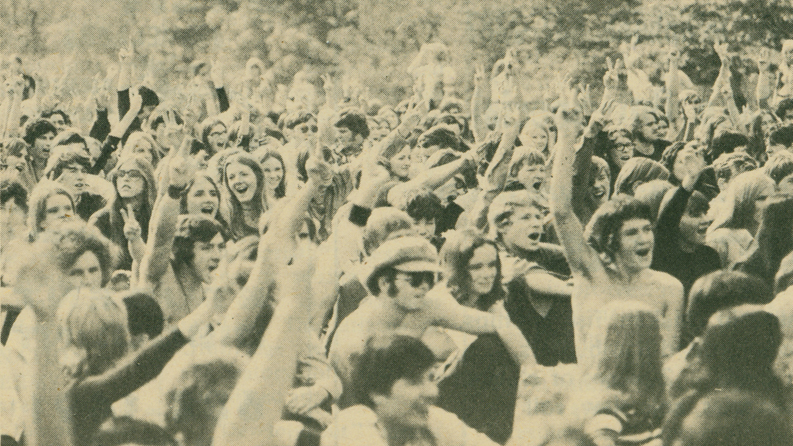 John Culp remembers the hot sun on his back, and the blare of rock music, and watching the crowd fill in, little by little, until there was no space left on the grass around him. These are the memories he carries with him of one of the greatest Brock concerts of all time — the Guess Who on Sept. 20, 1970.

The audiovisual technician in Information Technology Services was one of the estimated 7,000 people who crowded onto Brock’s football field 40 years ago for Festival ’70. It was a nine-hour concert that included Mashmakhan, Leigh Ashford, J. R. Flood, Papa Grey and more. It happened in the midst of music festival fever in North America — one year after Woodstock and one month after Mosport Park’s Strawberry Fields festival. The Guess Who had just released its hit “American Woman” as a hotly debated war raged in Vietnam.

Culp was 18 at the time and remembers it being hot and sunny, and the audience “just kept filling in” until there was little room to move. That night, as he walked home to his parents’ house in west St. Catharines, the music emitted from the towers of Marshall speakers followed him.

“I walked home and crossed the train bridge, and all the way home I could still hear the music,” he said.

While more than 100 police officers patrolled Festival ‘70, only minor offences were reported.

“For something that almost literally got ‘copped out’ of existence, yesterday’s rock Festival ’70 came off as a quiet success,” the St. Catharines Standard said in its Sept. 21, 1970 edition.

In an editorial, the Standard said the festival “served notice that there is nothing inherently evil about so-called rock festivals.”

“It was the year after Woodstock and everybody came out to the party that warm September Sunday,” Cahill said. “The huge speakers on either side of the stage were to be avoided at all costs unless you wanted to burst an eardrum.”

The concert was held by the Brock University Students’ Union. Financial statements printed in the Brock Press show The Guess Who as the highest paid band at $7,500, and J. R. Flood earned the least at $120. Other expenses included a hospital tent ($50.24), drinks and donuts for the stage crew ($20) and $30 worth of Australian brandy for the musical talent.