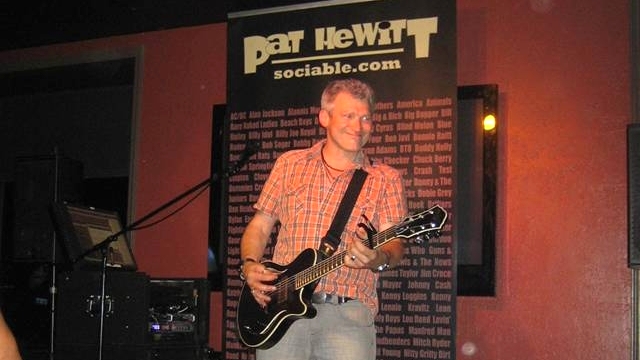 If you were a Brock student in the 70s and 80s, you likely remember Pat Hewitt, one of Alphie’s Trough’s beloved long-time performers. Hewitt was known by many for his fun, entertaining music and his “sociable” calls. Hewitt is returning to Alphie’s for an intimate pub night during Brock Days Alumni Weekend, 8 p.m. to 1 a.m. on Friday, Sept. 17.

The event is currently sold out, but for grads wanting to return to campus, there are still tickets available for the Alumni Pub Night at Isaac’s featuring Ubiquitous Synergy Seeker (USS). Register online.

Hewitt is not a Brock alumnus. A chiropractor by day and entertainer by night, Hewitt discusses with Brock News how he’s connected to Brock.

***
Q: I’m told that you were not actually a student at Brock. How did you get involved playing at Alphie’s Trough?

A: In 1977, I had already been playing in bars for approximately two years and had a girlfriend in first year at Brock when I was entering second year Natural Sciences at McMaster University. I came down to visit her one weekend and brought my guitar. She lived in DeCew Residence. I ended up playing for a few dozen people in a lounge area the students all referred to as The Knuckle. One of the people there was Bill, the original manager of Alphie’s Trough. He hired me to come back and play in the pub a few weeks later. It went over incredibly well and I got asked back again and again over the years, sometimes playing Thursday, Friday and Saturday as often as once a month. I played consistently until a couple of years after Isaac’s was built in the late 1990s. I’ve only done a couple of small alumni functions there since.

Q: What is “Sociable” all about?

A: “Sociable” was something I stole from an old guy English pub entertainer named London Bobby in 1975. He was playing the Rathskellar pub at McMaster University. I was in Grade 13 visiting my brother at Mac. He would sing old pub songs and every time he drank his beer he would yell “Sociable!” I thought it was pretty funny, so I just started doing it and it became one of the things I was known for. My car vanity plate is Sociable and my website is sociable.com

Q: How did you get into music and how would you describe the music you play?

A: I got into music in the early 1970s in high school. It was a watershed time for music — hard rock, soft rock, folk, folk rock, and country rock. I gravitated to folk (Gordon Lightfoot, Jim Croce, James Taylor, Bob Dylan, John Denver, etc.) and folk rock (Eagles, Jackson Brown, America, CSNY, etc.) and pop (Beatles, Moody Blues, Supertramp, etc). Right now, I still play the same kinds of music — lots of the old stuff (‘65-‘85), because that’s what I know best, but also newer stuff like Kid Rock, Black Eyed Peas, Jack Johnson — whatever I like. I only play what I like to play and what audiences like to listen to. I’m not the guy who wants the audience to concentrate on some deep message when I play. I just want people to stand up, make noise and have fun.  My original music is mostly about the same things as my cover tunes — having fun and making life more enjoyable through friends, relationships and experiences. Music is my own personal therapeutic capsule. I can’t begin to tell you what a charge I get out of being able to get up in front of people and perform. It is truly one of my most favourite things to do.

Q: Do you have any favourite memories of Alphies?

A: The standing joke is that I have no memories of Alphie’s! Alphie’s was and remains the single greatest venue I ever played.  Mulligan’s in Mississauga (where I played for 25+ years) is a close second, but definitely second. I had the best of shows and crowds at Alphie’s and Issac’s. Alphie’s though, was unique. It was enjoyable for years and years. Too many test tube shooters in front of too many people in the bar making too much noise, having too much fun night after night after night.

Q: Are you looking forward to returning to Alphie’s and Brock?

A: I am looking forward to being there, but I have no expectation it could ever be as much fun as it was back in the day… but, you never know with Brock alumni…

Q: What can you promise people who come to your show this September at Alphie’s?

A: That I am not the same guy I was in the 80s, but I’m still doing my best to bring it on and put on a fun, enjoyable show that gets the crowd involved.

Q: What are you up to now days?

A: This September will mark 25 years of my chiropractic career. I love my job. But I also love music. I’m still learning and writing new songs all the time. I live out in the country, north of Burlington near a little town called Kilbride with my wife of 17 years and my three children.