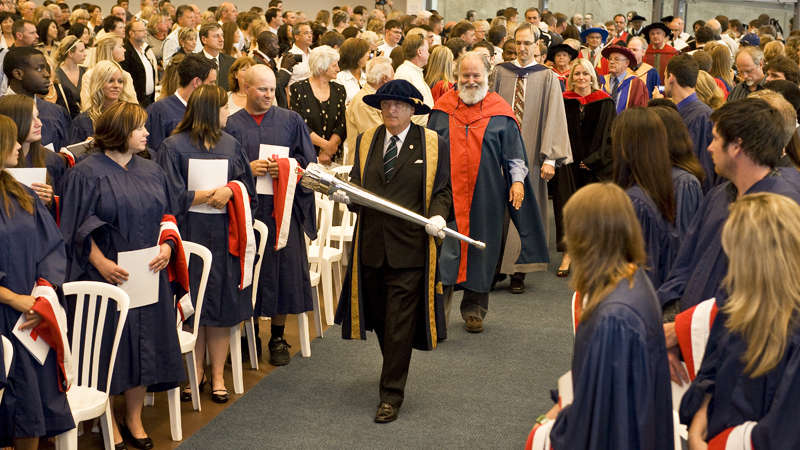 The Bailiff of Guernsey, Sir Geoffrey Rowland, carries the Mace during a Convocation procession.

On the first day of Convocation ceremonies, more than 850 Faculty of Education students from the St. Catharines and Hamilton campuses received their degrees.

During his Convocation address, Chancellor Ned Goodman advised the class of 2010 to “try to do one thing every day that scares you.”
He also added that “the only way to gain experience is to fail at trying to do something and I have learned that he or she who makes the most mistakes wins.”

Rudi Kroeker, Chair of the Brock University Board of Trustees, addressed Convocation at both ceremonies and handed out the Faculty of Education’s Board of Trustees Spirit of Brock Medals to undergraduate student Jason Dunphy (Hamilton, Ont.) and graduate student Emily Hastings-Speck (Mississauga, Ont.). Prof. David Hutchison, chair of the Teacher Education Department, delivered the morning Convocation address.

At the morning ceremony, Dean’s Medals were awarded to Christina Le Rose (Niagara Falls, Ont.) and Jennifer Rose Detina (Stoney Creek, Ont.). Dean’s Medals are awarded to students with the highest standing in either a first Honours or pass degree.

At Wednesday’s afternoon ceremony, President Jack Lightstone addressed the graduating class and expressed his satisfaction with their accomplishments.

“We share the pride that your families and friends feel,” he said. At Thursday’s Convocation ceremonies, more than 760 students were presented with degrees.

At the morning ceremony, the Bailiff of the Island of Guernsey in the U.K., Sir Geoffrey Rowland, was an Honorary Chair of Senate and carried the Mace in leading the Chancellor’s procession during Convocation. Guernsey is the tiny English Channel island where the university’s namesake Major-General Sir Isaac Brock was born.

At the 10 a.m. ceremony, an honorary degree was presented to Mary Ellen Turpel-Lafond, British Columbia’s Legislative Representative for Children and Youth. In her speech, she encouraged the graduating class to be champions for the rights of children.

“If you have an opportunity in your life to make a difference in the life of children,” she said, “please consider being a champion for a child in your community or in your family, in your province, in your country, or even globally.”

At the morning ceremony, David Howes, Immediate Past Chair of the Board of Trustees, presented the Social Sciences Board of Trustees Spirit of Brock medal to graduate student Renee Louise McKinley (Binbrook, Ont.).

At the 2 p.m. ceremony, an honorary degree was presented to Wilma Morrison, local historian, curator, advocate and educator of black history in Niagara. She was recognized for her tireless efforts in promoting and preserving black history and its connections to the Underground Railroad in Niagara and Canada.

“We Canadians have much to be proud of in the contributions of the many varied groups who are continuing to build this country,” she said during her address to graduates. “The pity is that we are not teaching our young people about the wonderfully proud history of the building of Canada and all too often newcomers as well as others are spoken about in a negative tone.

“It is important that we learn about each other in a positive way so that we will not fear each other and our country will continue to grow and enrich the lives of all Canadians.”