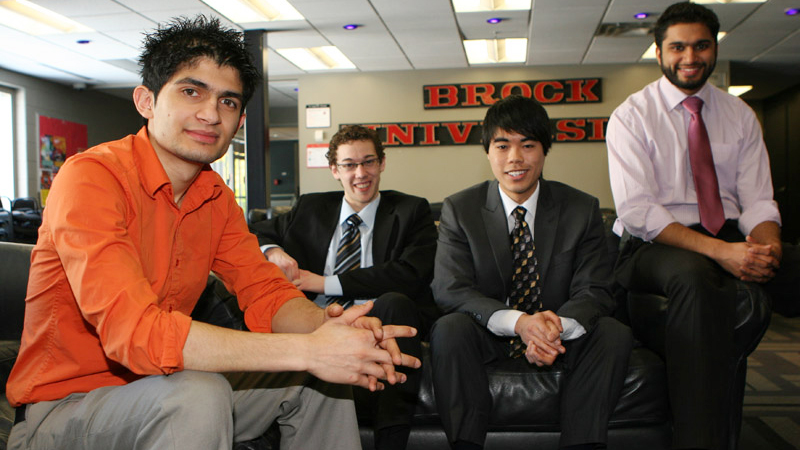 Improving community relations and getting into the real estate business are two goals of the recently elected Brock University Students’ Union (BUSU) executive.

The union would like to continue with efforts established by previous executives to improve relations with St. Catharines and Thorold residents, said president-elect Sohail Ahmed, who served in 2009/10 as vice-president of student services.

Ahmed would also like to see a BUSU-owned off-campus residence, a concept that has been successful at other universities, he said. The residence would be not-for-profit and not limited to first-year students. Students would be able to rent a room at cost.

“We’d like to become the landlord, rather than students complaining about their landlords,” he said.

Ahmed will lead the executive, comprised of four paid positions, for 2010/2011. He is a third-year Business Administration student from Niagara Falls. At 20, he is a business owner twice over (Momo Cars Inc., See Sight Tours) and president of Guinness Brock, the club behind Brock’s Guinness World Record of the most people playing air guitar at once. With a total of 2,570 votes cast in the February election, Ahmed received 1,179 votes, besting incumbent Lianne Bradley’s 759 votes and Daryl Paulin’s 536 votes.

Daud Grewal, new vice-president of university affairs, is also a Niagara Falls native. He is 21 and in his third year of Political Science. He won with 50.4 per cent of the popular vote.

Kenneth Truong, 20, is a third-year Business Administration student who hails from Brampton. He was elected vice-president of student services with 44.1 per cent of the vote.

Sebastian Prins, 20, is also from Brampton and is a third-year Business Administration student with a concentration in Organizational Behaviour. He is the vice-president of finance and administration and received 54.5 per cent of the vote.

Grewal said one of his goals is to promote BUSU within the student population, because “there are a lot of students out there who are simply unaware of what BUSU does.” He’d also like to reform the Brock University Students’ Administrative Council (BUSAC) to make it more effective, and encourage students to take part in the “40 Neighbours Program,” which would see them getting to know at least 40 of their neighbours.

Prins would like to see more community partnerships, and will work heavily on partnership packages. Truong would like to increase student awareness and involvement, and see an effective online database of events that students can reference.

Ahmed, who campaigned on bringing the “next big thing” to Brock students, was pleased with the major evaluation of the clubs budget in the past year, when the last BUSU election saw students approve a $140,000 levee for clubs. BUSU has implemented a two-day mandatory training program for club presidents that has attracted the attention of other university student unions.

There is also a long-term goal of expanding the student centre so the offices of clubs and associations can be centralized, Ahmed said.