Brock Odyssey 2017: From Delphi to Olympia

The Department of Classics takes selected students on a study tour or archaeological excavation each summer. These trips allow students to experience the art and culture of the ancient Mediterranean world in an entirely new way.

This year, Professor Allison Glazebrook and the CLAS/VISA3M23 students are on a study tour of Greece from June 5-18th. During this time, students will be blogging about their experience on the course blog and sharing picture on our faculty’s Instagram and Facebook. Follow along on social media with their hashtag, #brockodyssey2017!

We will be sharing a few of their blog posts with you here. Today’s post is by Sarah Murray, a third year Classics student in the archaeology stream.

To learn more about the Department of Classics’ study tours, visit their information page.

The road from Delphi to Olympia descends from Mount Parnassus at an elevation of 1,800 feet to the Gulf of Corinth at sea level. It is a thrill ride of switchbacks on narrow mountain roads, that takes you from the Ancient Greeks’ most important sanctuary at Delphi, to the fertile farmland around Olympia.

The route passes through country that is harsh and rugged, but filled with pink and white rhododendrons and wildflowers that support the bees from the numerous apiaries located on the mountainsides. From the bus you see the houses pass in flashes of white stucco and red terracotta roofs, white-walled cemeteries full of tall white crosses, beside little white churches and the  frequent small and brightly painted roadside shrines. Many of the rounded mountains are topped with windmills and houses wear solar panels on their roofs-a reminder of the modern world-in a landscape where you can see the remains of abandoned farms hiding in the tall yellow grass. The old and the new exist side by side here in Greece-the past runs into a present in a state that must struggle to meet the needs of its living citizens while preserving the legacy its ancestors. 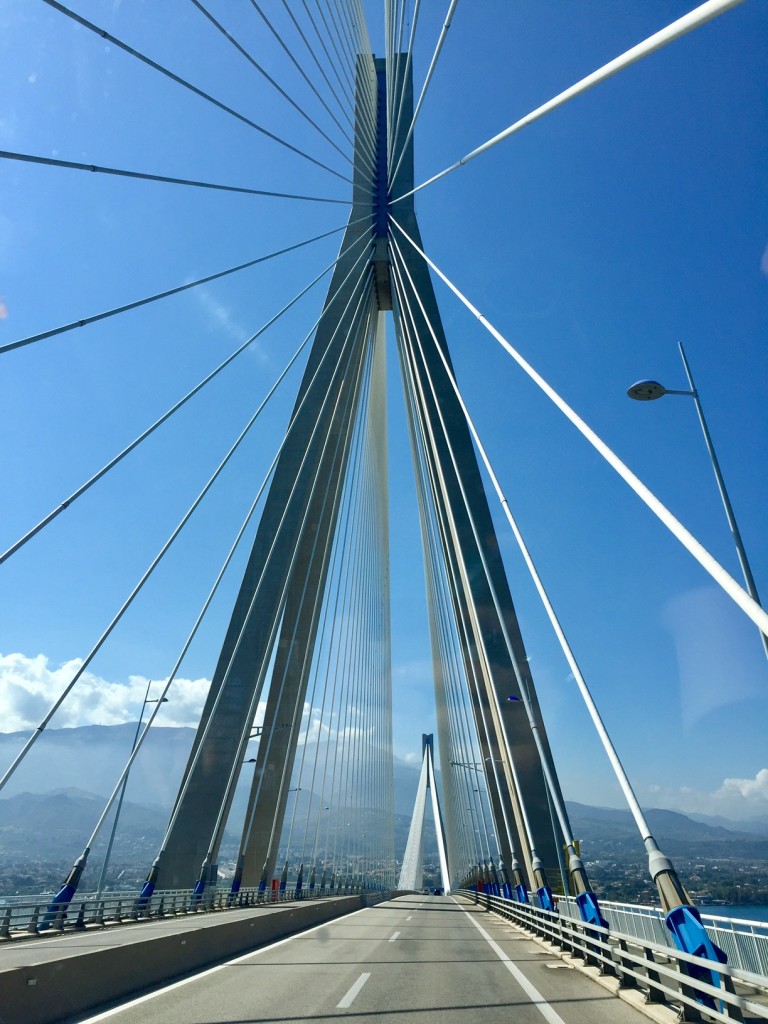 Incredible engineering of the Rio-Antirrio bridge. Photo by Stephanie Semenuk.

One image of modernity is the Charilaos Trikoupis Bridge  (the longest fully suspended cable type bridge in the world) that spans the Gulf of Corinth and connects mainland Greece to the Peloponnese. You can see the length of it gleaming white in the distance as you reach the coastal plain. The cables that suspend the bridge arch gracefully towards the sky giving the structure an appearance of lightness that belays the reality of the supporting piles that anchor it to the sea bed sixty-five feet below the surface of the treacherous strait. It is a blend of technical mastery over the elements and yet still a thing of beauty-so very Greek.

The bridge takes you to the Peloponnese where the land is lush and fertile, for there is water here to nourish the growth of the vegetables and vines that grow in abundance, and the olive trees of course. Tall green cedars rise above everything as they soar towards the sky like dark spears against the backdrop of blue.  This landscape is such a contrast to the rugged power of the sanctuary in the mountains, but both scenes have their own particular beauty. 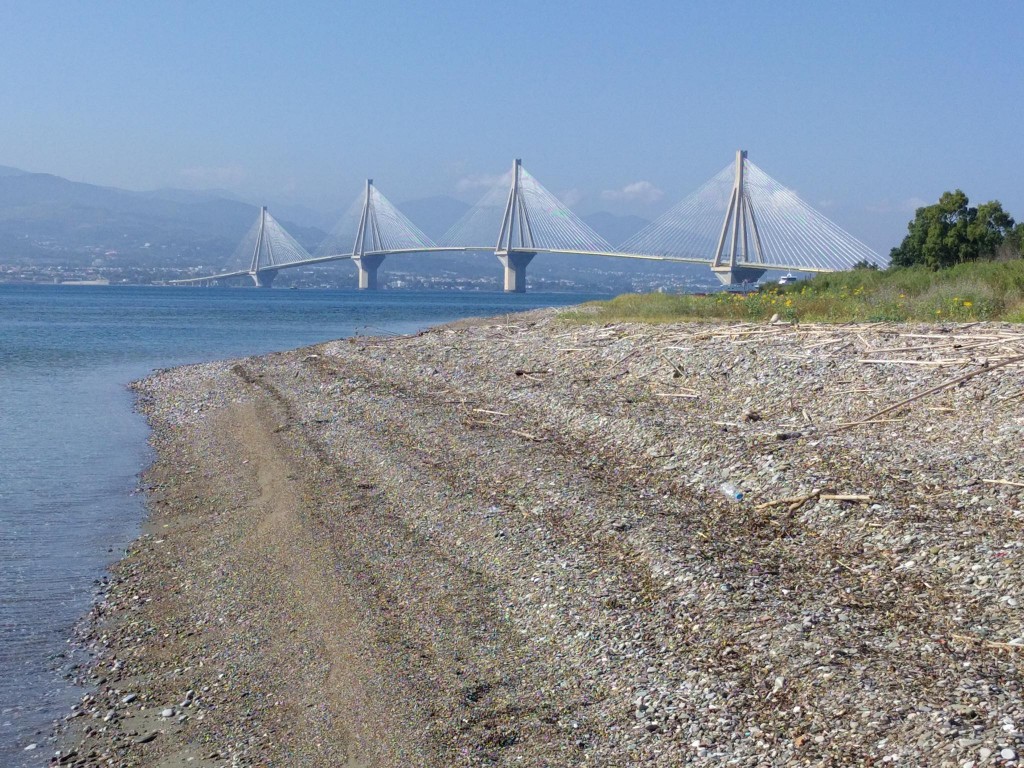 This is the landscape of the Sanctuary of Zeus at Olympia, an ancient site where athletes worshipped the god in athletic competitions that drew participants from all over the ancient world. The ancient Olympics began here in 776 B.C.E. and like the modern games were held every four years. Before the games started word would go out in all directions to inform the various city states that the games would be held soon, so that hostilities would cease and the games would be peaceful. The tradition was ended at the end of the fourth century C.E. but the modern Olympics are based on those long ago athletic events.

At Olympia the ruins of the Temples of Hera and of Zeus, state treasuries and monuments such as the Philippeion sit along paths that are shaded by large trees. Under some of the trees there are architectural fragments from the site that provide a pleasant place to sit and enjoy the breeze. The foundations of the Temple of Zeus hint at the grandeur of the temple that once stood here, but only one lonely column stands among the tumbled ruins that have succumbed to floods, earthquakes and the passing years. 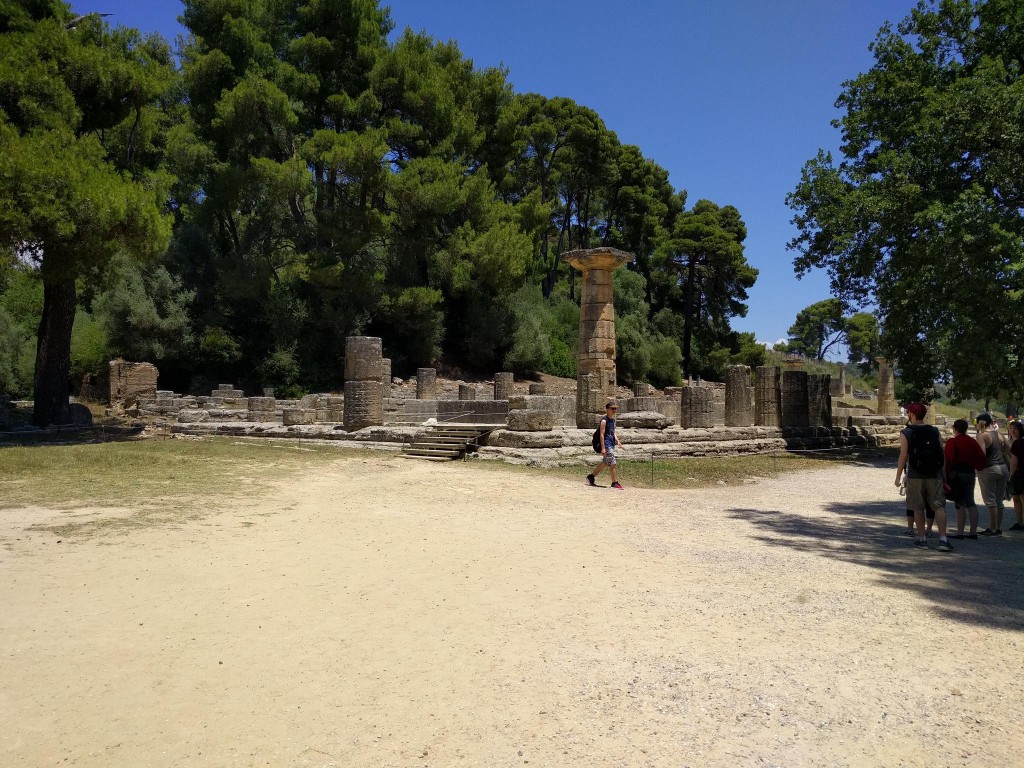 Temple of Zeus at Olympia. Photo by Sarah Murray.

The museum displays the wealth of the archaeological finds from the site, from the votives left by worshippers, armour and weaponry dedicated to Zeus and moulds used in the workshop of Pheidias who created the enormous statue of the god that resided in the Temple of Zeus. The museum also displays the magnificent sculptures from the temple pediments that have to be seen in order to appreciate their scale and the mastery of the sculptors. 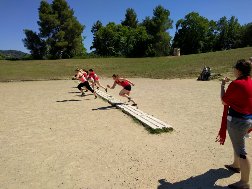 Students take on the original Olympic foot race, the stade, at Olympia. Photo by Sarah Murray.

The truly adventurous can enter the ancient stadium through the same gateway that the ancient athletes and umpires used, stand behind the balbis (the starting line) and race against their friends to the finish line about 200 yards away. If you do run, you can say that you raced at Olympia and be proud of that feat, after all the only people who know that you finished last were the friends who cheered you all the way to the finish line.