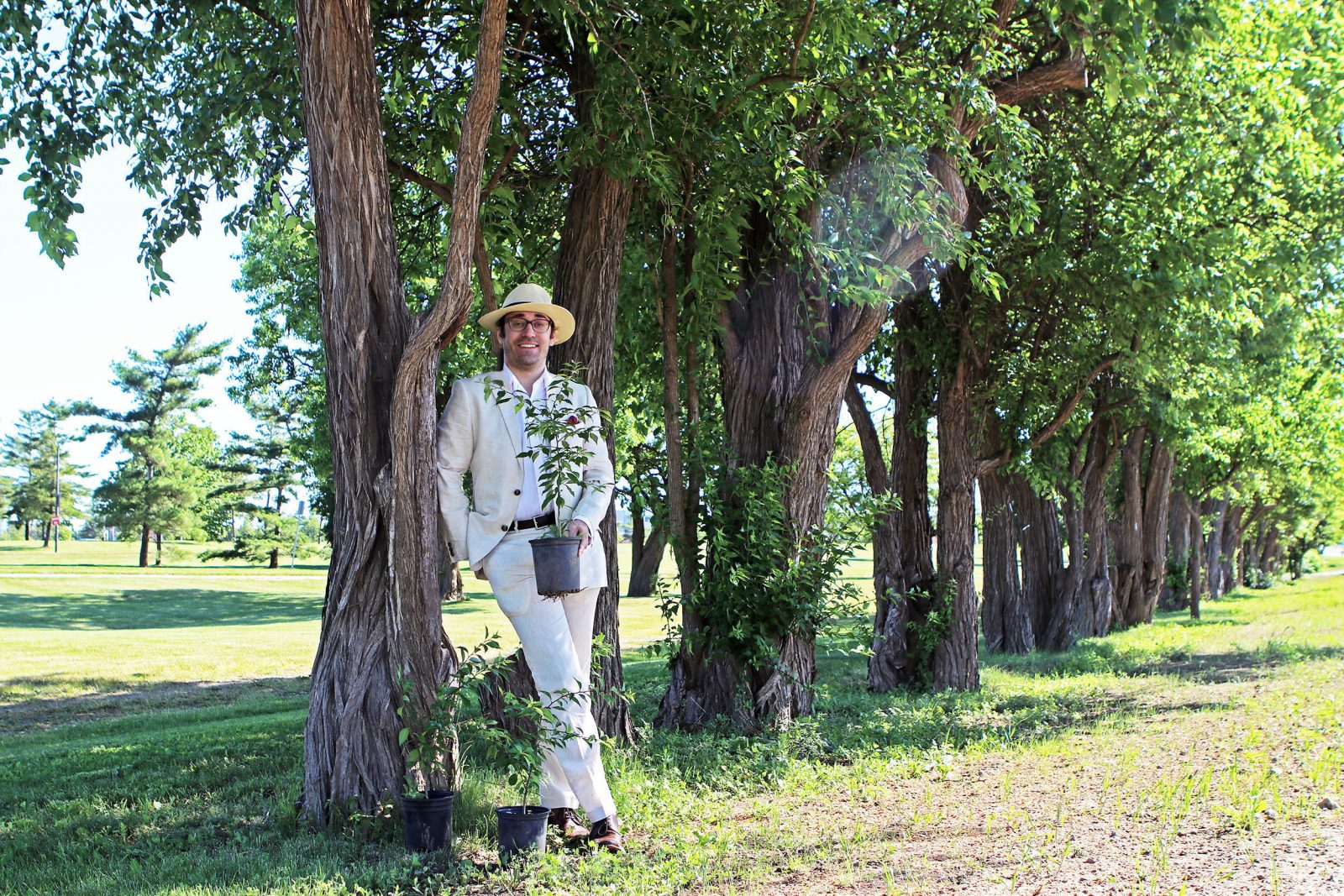 “I love trees and everything about them,” said Yendt, whose years of leadership experience with the University include roles with the Board of Trustees, Senate, Graduate Students’ Association and Brock University Students’ Union. “The way the sun dapples through the leaves, the sound of the wind whistling in the branches and the beauty of their bark. One of my favourite things about Brock is the Osange orange trees and their place and history within the campus.”

While their Latin name is Maclura pomifera, the trees are often referred to as Osange orange or hedge apples. A relative of the mulberry, the name stems from the Osange Nation, the Indigenous stewards of the land the trees originate from in the south-central United States. Settlers brought the trees across North America during the 19th century to use as natural fences along property lines. The smell of their decaying fruit can sometimes evoke that of an orange, while their spiny branches deter cattle and other livestock from passing through them. Their fruit is inedible to humans and animals, which makes it difficult for the tree to naturally propagate itself.

Although Osange orange trees are rare in southwestern Ontario, Brock is home to several. Most are located along the north side of Zone 2 parking and Canada Games Park, marking the boundaries between the farm fields that predate the University campus.

It was Brock’s ample trees and location within the UNESCO Biosphere Reserve that attracted Yendt to the University 13 years ago.

“Brock’s campus is so integrated with the natural surroundings, something about that felt a little like home,” he said.

He remembers hiking the Bruce Trail down the Niagara Escarpment when walking from campus to his apartment and playing Frisbee in Isaac Brock Circle, the greenspace surrounded by 64 willow trees. The University’s Sakura cherry trees, pond with waterfall and two nearby lakes are also popular natural attractions.

Yendt’s interest in the Osange orange trees was piqued a few years ago when construction began on the Canada Games Park.

“I read the plaque dedicated to the trees and was intrigued to learn more about them,” he said. “I noticed that one of the former roads into Zone 2 was decommissioned and thought maybe I could grow something that would fill the gap in the hedge. Since that time, I have been trying to grow trees from their fruit and had been unsuccessful until last year.”

Yendt’s plant-growing journey has been a family affair, which he feels is indicative of how his family has supported his student experience.

“My mother taught me everything I know about plants, and these trees are thriving because of her tutelage,” he said.

Of the 36 seeds he planted, 11 trees sprouted and 10 are thriving, each standing between 45 to 75 centimetres tall. The gifted trees will continue to grow in pots on campus until they are large enough to plant in the ground without fear of animals damaging them. They will be known as Yendt Family Grove.

“I wanted to contribute to the University in a meaningful way,” Yendt said. “The trees and I each have a long history with the University. Like them, I set down roots at Brock and this project blossomed as a result.”

As Yendt closes his 13-year chapter of student involvement at the University, he is happy to see his passion project come to fruition and feels gifting the trees is symbolic to his leadership style.

“This is a literal example of my life’s mission: to plant seeds for trees I will never sit under and cultivate gardens I’ll never enjoy,” he said. “I’ve approached every project I’ve done at the University with this idea that it probably won’t benefit me, but it will benefit someone that comes after me.”