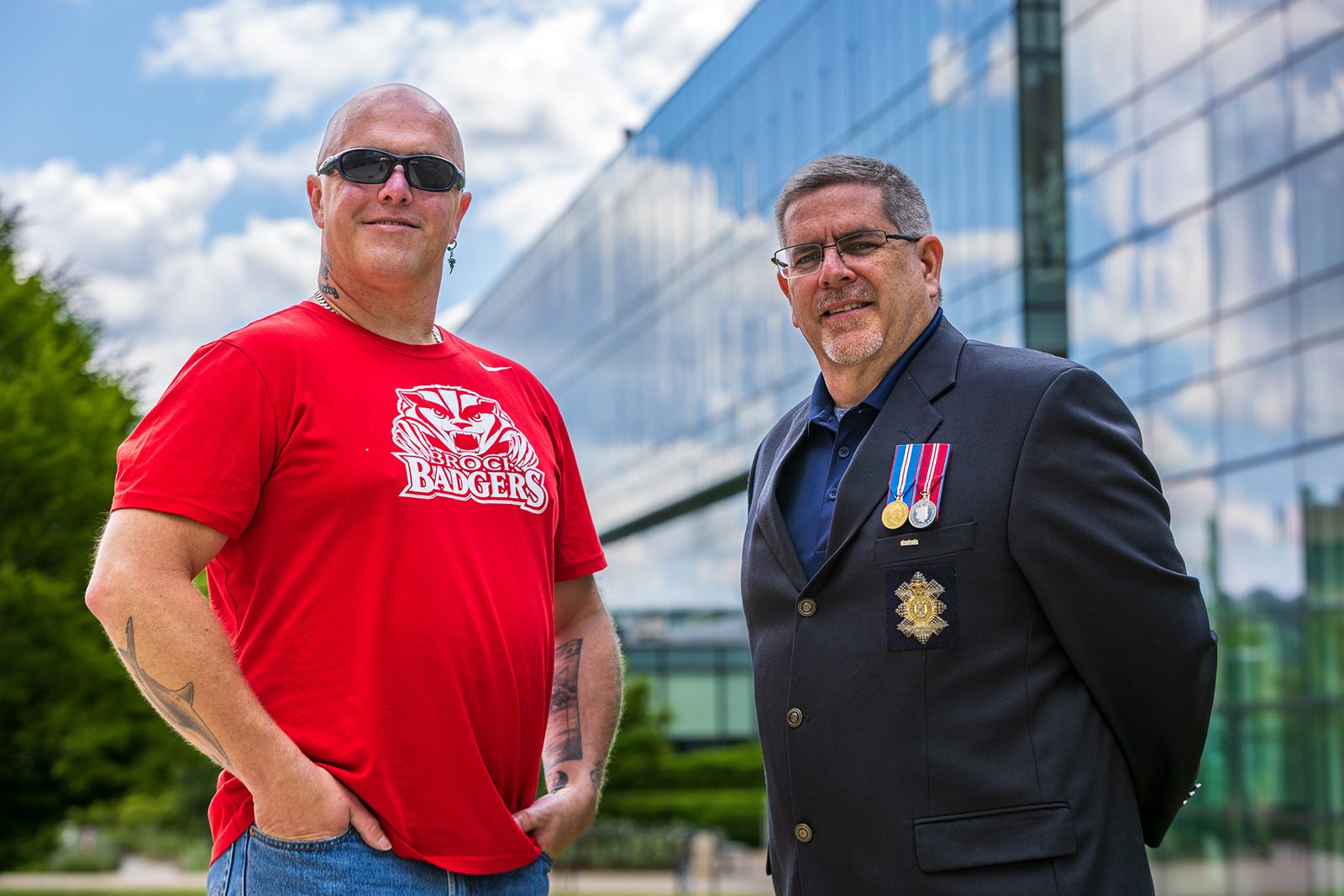 Brock University mature students Kyle Edwards and Kieran Boyle are graduating next week with a Bachelor of Arts in Psychology and a Bachelor of Sport Management, respectively.

In an instant, each saw their life veer in a new direction, turning their world — and ultimately, their career — upside down.

But with change came new opportunity that led the mature students, who will each cross the stage next week at Brock’s Spring Convocation, to pursue new passions through education.

Edwards, 44, was involved in a severe motorcycle crash in 2010 that resulted in years of physical and mental health therapy. He fractured his skull, broke several bones, including his wrist and a finger on his dominant hand, and suffered a traumatic brain injury that led to diagnoses of post-traumatic stress disorder, photophobia, and avoidant and borderline personality disorders. 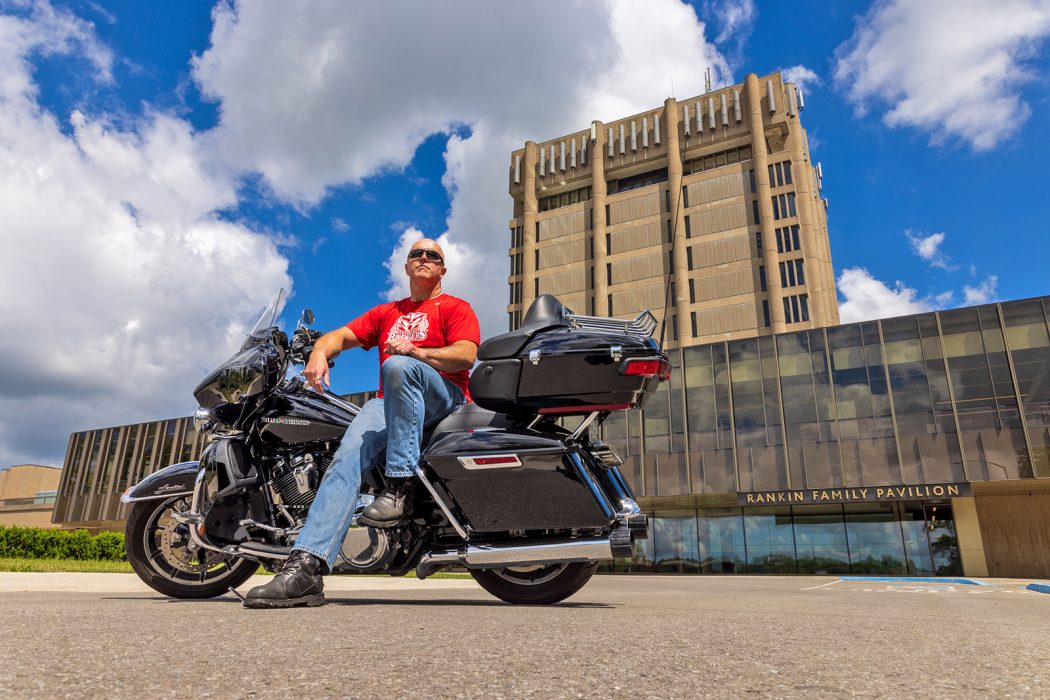 After experiencing a severe motorcycle crash in 2010 that resulted in years of physical and mental health therapy, Kyle Edwards changed career paths and pursued a degree in Psychology so he could help people who experienced similar trauma.

At his worst, he experienced depression and became suicidal.

After an unsuccessful search in Toronto for therapists willing to treat him, Edwards moved back to his hometown in Niagara to participate in a mental health program his family doctor recommended.

A few years into therapy, he decided to pursue a new career path. He quit his 20-year career as an IT professional and in 2018, enrolled in Brock’s Psychology program. He hopes to one day graduate with a doctorate in clinical psychology.

“I initially planned to stay at work, but decided to make a switch,” he said. “I wanted to help people who experienced similar traumas.”

Returning to post-secondary education after two decades was difficult for Edwards at first.

“Everybody in my class was half my age, so I didn’t have any social camaraderie,” he said. “By year two, though, my classmates started talking to me a bit more, and then suddenly, it felt like everyone was talking to me, even people I didn’t know.”

In addition to the challenge of being a mature student, Edwards’ physical and mental disabilities prevented him from completing assignments and exams the same way as everyone else. His hand injuries made it painful to write and his photophobia — light sensitivity that causes eye discomfort — had him wearing sunglasses all the time.

Edwards registered with Student Accessibility Services (SAS) so he could write his exams on a computer in a private room.

“For mature students, there is help,” he said. “There is a lot of support from fellow students, professors, teaching assistants and SAS staff. As stressful as it’s been, this has been the most fun I’ve had in a very long time.”.

Like Edwards, Boyle, 53, pursued post-secondary education after a life-changing injury. 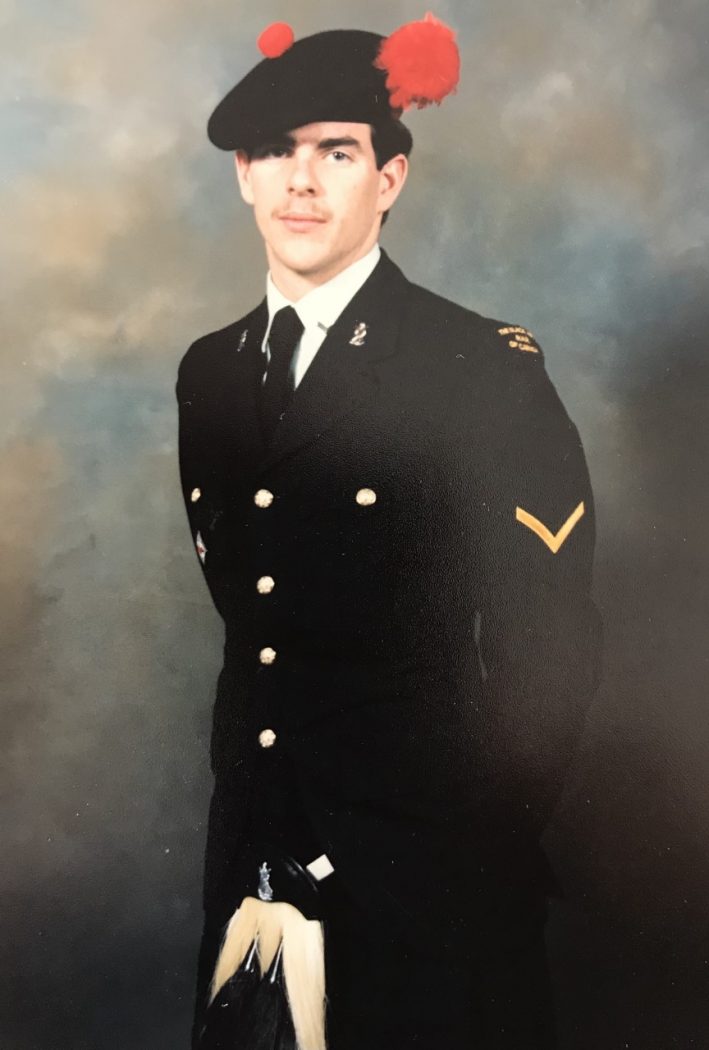 Kieran Boyle in 1989 as a Private in the Black Watch (Royal Highland Regiment) of Canada.

Boyle joined the Canadian Armed Forces out of high school and stayed with the military for 14 years as a casualty aide and drummer to help financially support his newly widowed mother.

Once he retired, he worked a variety of civilian jobs, including a role co-ordinating adult and adolescent recreation and skill development programs.

In 2017, Boyle severely injured his shoulder while coaching hockey. His knee, which he had injured during military training, gave out, causing him to fall and tear his shoulder muscles, ligaments and tendons.

“I couldn’t raise my arm over my head for at least a year,” he said. “The injury was so bad, my employer told me they couldn’t rehire me.”

He didn’t have enough seniority to take on other available roles within the organization, and when he applied for jobs elsewhere, he was told he needed a university degree.

With limited career opportunities available, Boyle applied to the Veterans Affairs Canada Vocational and Rehabilitation program, which provided him with financial support to attend university.

“I’m so grateful I qualified,” he said. “It’s rare military personnel meet the criteria to go to university without first going to college.”

“Sports does so much for individuals, and it’s incredible what sports have done for me,” he said.

Boyle played and coached sports from a young age and continued to play into adulthood. He has held several volunteer leadership roles within sports organizations, including 26 years as president of the Hamilton Touch Football Association and an assistant coach role with the Brock Badgers women’s hockey team during his second year.

Boyle is currently volunteering with Hamilton 2030 Bid for the Commonwealth Games and hopes to find a career in management, player personnel and coaching.