Note: Faculty Focus is a monthly series that highlights faculty whose compelling passions, innovative ideas and various areas of expertise help weave together the fabric of Brock University’s vibrant community. The full series is available on The Brock News.

For as long as she can remember, Donna Szoke has always been one to happily colour outside the lines.

The Brock University Associate Professor of Visual Arts paints a vivid picture of her childhood, when, as the youngest of four, she first became known for letting her imagination run wild.

“There’s this picture from when I was really young and everyone is in nice dresses, but there I am in this kooky getup with crinoline around my neck — totally happy,” she says. “Growing up, I lived in a world of pretend and imagination.”

In high school, she fell in love with theatre, but it wasn’t the acting she was drawn to.

“I loved all the exercises that prepared you for acting,” she says. “Like imagining you were walking through three feet of melted marshmallows and what that would be like.”

When she reached university, Szoke remained focused on theatre and creative writing, but the experience, and the creative individuals she met along the way, would soon broaden her horizons.

Among her new circle of friends was Guy Maddin — a now celebrated Canadian filmmaker. He recruited Szoke, who had been making her own clothes since she was 14, to create costumes for his projects. 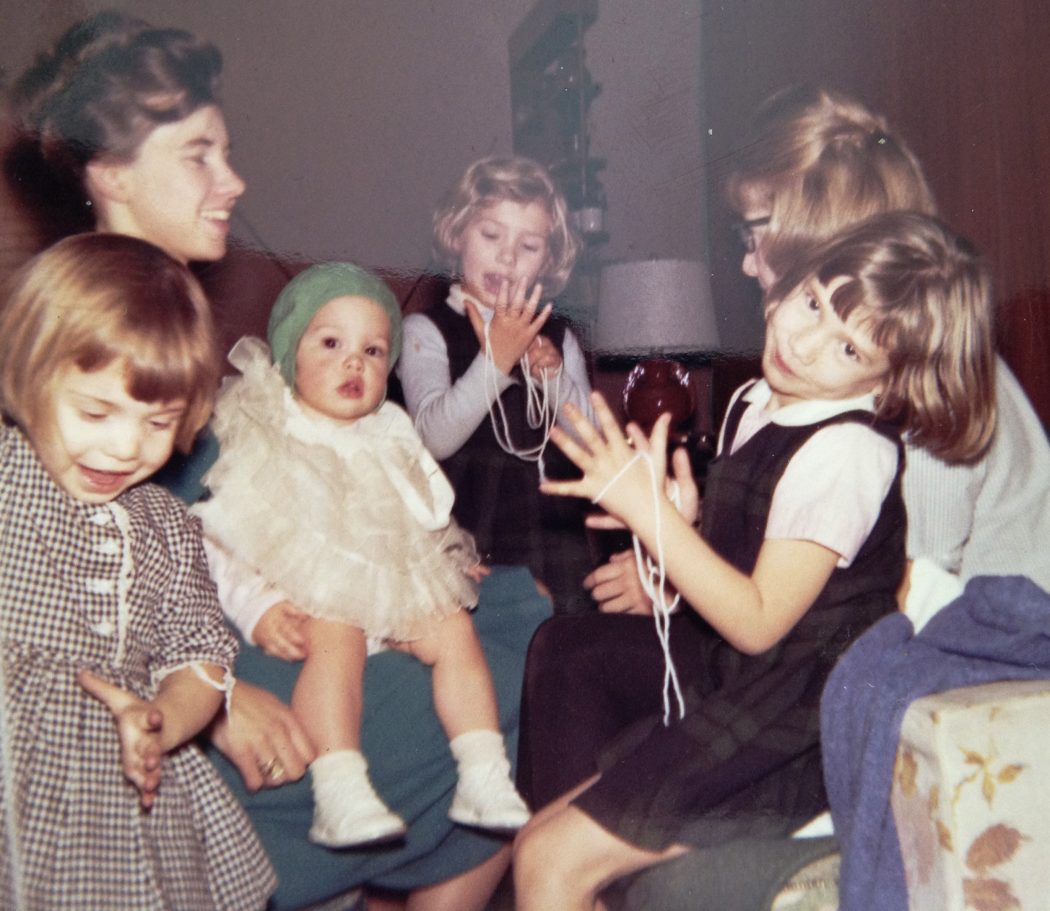 The youngest of four, Donna Szoke (pictured third from left) has long been known for her unique style and creativity.

Every few years Maddin would make a film and Szoke would get to work. Her designs went on to win awards at festivals around the world. Meanwhile, Szoke, still in school at the time, ran a vintage clothing store with her sister, where they modified and sold vintage clothing.

University is also where Szoke got her first taste of performance art, and she began to experiment more with artistic creation.

“I really took my time doing my undergrad, because nothing quite fit,” she says. After graduating, she was accepted into a prestigious theatre school. It took only six weeks for her to realize that path was not hers.

“I just hated it,” she says. “I changed directions and started making hats for a living.”

Szoke was still ruminating on her earlier art experiments, including her first piece of installation art. With the help of friends, she began collecting and organizing cardboard boxes to fill a wall in her studio — an unconverted turn-of-the-century fire hall.

“I really liked it visually, but I didn’t know what it was,” she says of the display.

Szoke soon turned her attention to Simon Fraser University’s (SFU) School for the Contemporary Arts and attended an admissions interview. With no portfolio to offer, she shared photos of her costume design work and of the wall of boxes she had found so compelling.

“They said, ‘that’s installation art,’” Szoke recalls. She may not have known its name at the time, but her work impressed the arts school nonetheless, and she was offered a spot to complete an undergraduate degree in visual arts.

“I was so surprised to find this world that I fit into,” she says.

But the true revelation came when she took her first video art course. That was the moment it all “made sense.”

Video art brought together Szoke’s training in theatre, creative writing and visual art forms, and the ever-changing technology meant she was constantly learning. “I absolutely loved it,” she says.

Szoke went on to earn her master’s in interdisciplinary art at SFU, where she taught during her graduate studies and fell in love with leading a classroom.

Her Brock journey began 12 years ago when she applied for an artist in residency role at the University. The chair of Visual Arts at the time instead offered Szoke a teaching position.

While teaching digital media classes at Brock, Szoke has continued to hone her craft through the years with popular exhibitions, public art displays and community projects, such as Niagara Health’s sticky note display that expressed messages of hope and gratitude during the COVID-19 pandemic.

“My practice continues to evolve, as does technology,” she says. “I like to keep things fresh by challenging myself.”

For students who haven’t quite found their fit yet, Szoke advises them to stand fast.

“Realistically, about 70 per cent of jobs of the future don’t exist yet, so, I’d say that’s a big, green ‘go’ light,” she says. “Go forward with your interests that drive you and trust that there’s going to be formal resolutions to how those exist in the world.

“Things can change rapidly, and they have, so I’d say to stay grounded in one’s curiosity and passions. Keep pursuing those and keep looking for the connective tissue, how we manifest those interests and desires in the world through work.”