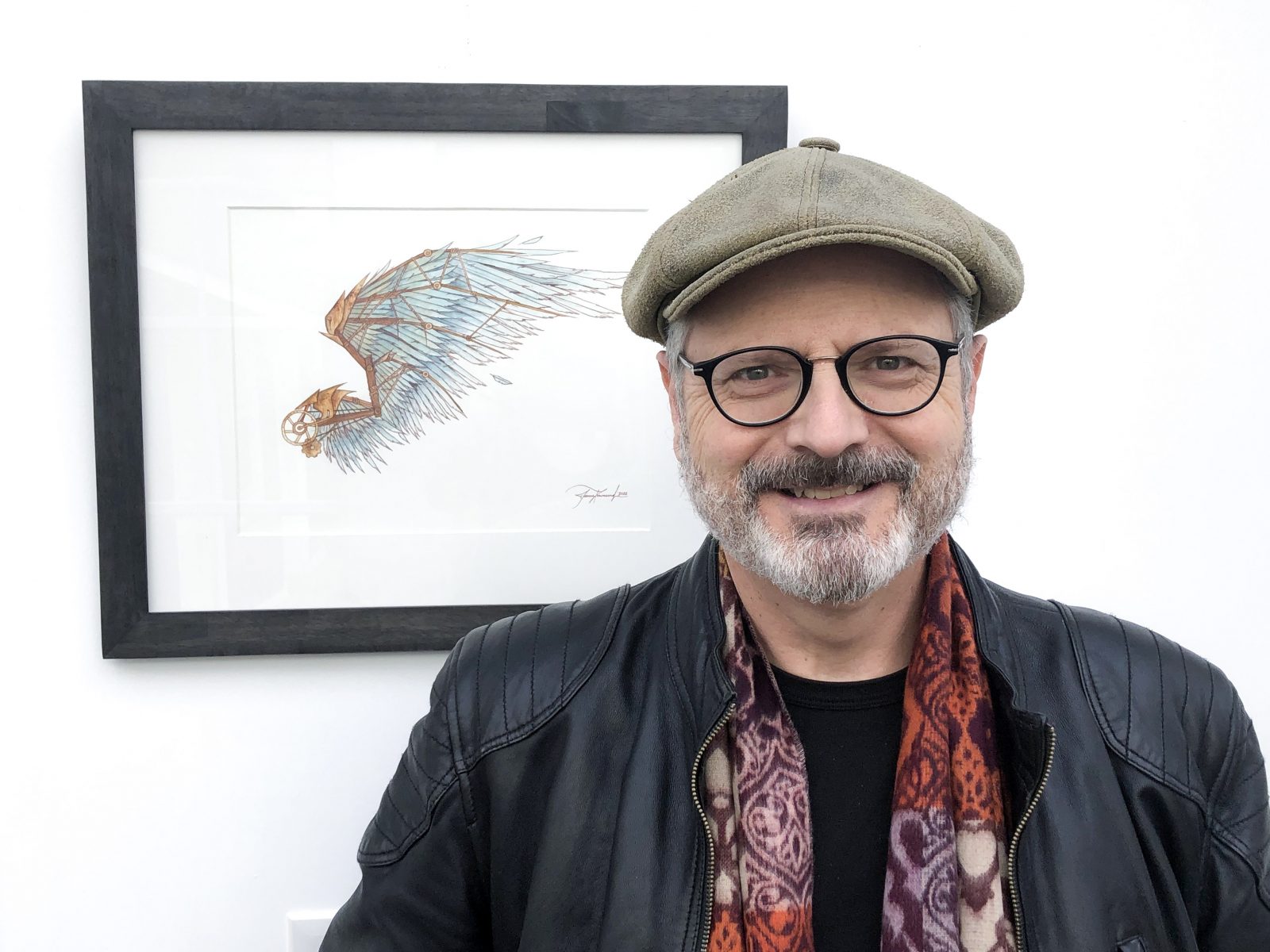 With the publication of his latest book, Phil Mackintosh in the Department of Geography and Tourism Studies (shown with framed cover art) fulfils a promise to his late colleague and co-author, Clyde Forsberg.

Phil Mackintosh’s newest book, B.H. Roberts, Moral Geography, and the Making of a Modern Racist, is born of the pandemic in more ways than one.

The book was completed during lockdown and published by Cambridge Scholars Publishing last week — just over a year after the death of co-author Clyde Forsberg.

Mackintosh, a Professor in Brock’s Department of Geography and Tourism Studies, originally planned to write the book’s foreword for longtime friend and colleague Forsberg, a Professor at the American University of Central Asia in Kyrgyzstan.

But Forsberg contracted COVID-19 early in the pandemic, and when his ‘long COVID’ condition quickly deteriorated after a heart attack, plans changed fast.

The book’s opening pages share the history of the lifelong connection between Mackintosh and Forsberg, who were childhood acquaintances, graduate school friends at Queen’s, jazz trio bandmates and, ultimately, writing partners. It also explains how the transdisciplinary collaboration between Forsberg, a historian of religion, and Mackintosh, a historical geographer, took shape.

He was faced with a dilemma when Forsberg died very shortly after completing the first draft, however. Mackintosh could finish the book, layering in the critical geography that Forsberg wanted him to contribute, and he could even see the book through to publication on behalf of his collaborator. But the peer review process, which would require both authors to be available to respond from their respective fields of expertise, was no longer an option.

Mackintosh crystallizes the risks of transdisciplinary research in a time of pandemic with one anecdote.

“There’s one important citation where Clyde talks about Mormon dissenters in the 1960s who were excommunicated as Mormon fundamentalism solidified under the influence of Joseph Fielding Smith Jr.,” says Mackintosh. “Clyde cited many authors without reference, and I could track only one when copyediting. So I added a footnote to explain that I’d had to cut this raft of citations, but nevertheless included them for anybody curious to chase them down.”

The transdisciplinary monograph deconstructs the deep racial prejudices baked into the writing of modern American Mormonism’s principal theologian, B. H. Roberts, in the late 1920s. Mackintosh and Forsberg use source criticism and close reading to show the origins of — and social and cultural harm in — his thinking.

“Scrutinizing Roberts’ sources — many of which argue against him — reveals that he was a careless and guileful researcher who cherry-picked information and engaged in plagiarism,” says Mackintosh. “Crucially, we explain how he succumbed to Victorian understandings of imperialism and white superiority, and believed these to be divinely inspired. So he becomes an ideal of the ‘modern racist’ through his use of spurious race science and white creationism to affirm his religious beliefs.”

In their introduction, Mackintosh and Forsberg declare their project to be “a work of anti-racist geography” that views Roberts and his racialized creation science through the lens of the Black Lives Matter era.

They uncover the white supremacy and quasi-fascist Christian imperialism of Roberts’ manuscript, The Truth, The Way, The Life, in which he selectively used ideas from leading intellectuals in the fields of philosophy, psychology, paleoanthropology, physics and evolution to devise an interstellar origin story for a white Adam and Eve in order to separate them from the scientific evidence showing that humans evolved in and migrated out of Africa.

Roberts’ moral geography, or moral judgments imposed on real and imagined geographies, as referenced in the book’s title provides an example of the lengths to which white supremacy will go to “reinvent even the geography of creation to coddle its virulently moralized idea of ‘white place,’” as Mackintosh describes it.

The authors also show that although Roberts’ manuscript was rejected by Mormon leaders of the time, including Joseph Fielding Smith Jr., and remained unpublished for 60 years, Smith later repurposed Roberts’ arguments in his own writing without crediting him, a previously undiscovered connection.

The book, a passion project for Forsberg and a labour of love for Mackintosh, raises several key questions, from why Smith would plagiarize a racist manuscript he initially recognized as dangerous to his faith to how structural racism impacts Christian theology overall.

Its surviving author has a few residual worries, as well.

“I’m desperate for Clyde’s opinion — and reassurance,” says Mackintosh. “I think I can sense the latter. But I need to hear him say, ‘this works’ or ‘you’re overreaching here’ or ‘I think you’ve understated that.’ Who anticipated this wrinkle in transdisciplinarity?”