How Badgers alumni laid the foundation for Brock Sports success 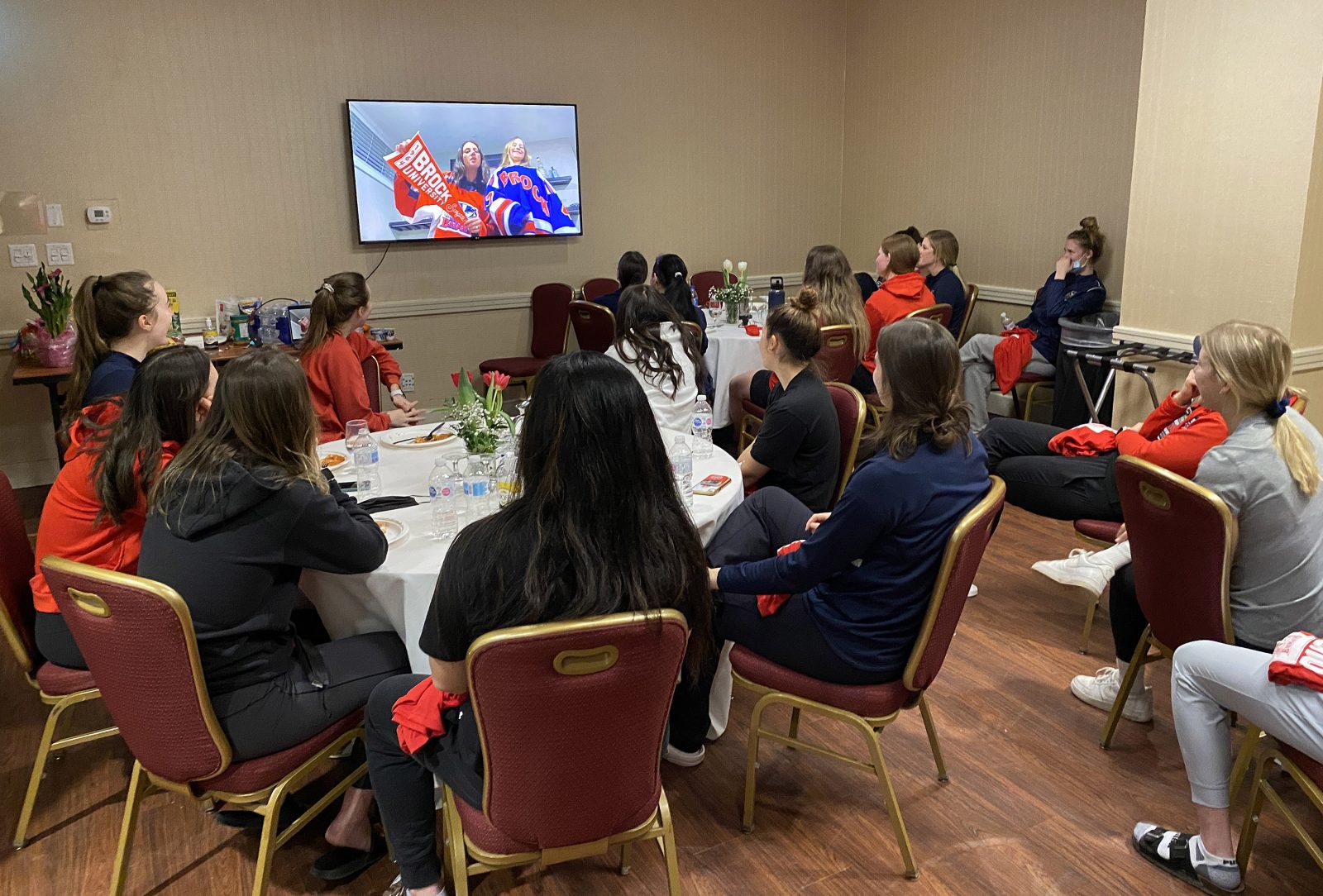 The Brock women’s hockey team watches a video of encouragement sent to them from Badgers alumni from over the years prior to their U SPORTS National Championships opener Friday, March 25.

Before taking to the ice to open the U SPORTS Women’s Hockey Championship in Charlottetown, P.E.I., Friday, March 25, the Brock Badgers gathered around a television in the host hotel to watch a message from previous generations of Brock women’s hockey players.

One by one, former players and coaches offered well-wishes and words of encouragement to the 2021-22 Badgers team that won the school’s first-ever Ontario University Athletics (OUA) women’s hockey title a week earlier.

“We’re feeling excitement, pride and are just so happy because they’ve accomplished something we weren’t able to,” said Todd Erskine (BA ’99), the first-ever Brock women’s hockey coach when the program launched in 2000. “Knowing how hard it was to just get to the OUA finals and then for them to win, it’s so exciting to see it all coming together.”

This year’s Badgers women’s hockey team, which opened the nationals with a quarter-final matchup against University of Saskatchewan Friday, is one of five Brock varsity teams that have qualified for their respective U SPORTS championships this year. The women’s volleyball team is also competing this weekend in Calgary, while the men’s and women’s basketball teams and the men’s hockey team will all compete in their nationals next weekend.

Badgers alumni from across all sports have been reaching out to offer support and congratulations for the unprecedented success this year.

Brock Sports Director Melissa Krist said strengthening the relationship with Badgers alumni is one of her priorities.

“All of these teams competing at the national championships this month are there because of the hard work and effort of the coaches, student-athletes and staff that came before them,” she said. “I know it means a lot to our teams to know that there’s a whole family of Badgers alumni who are cheering them on as student-athletes and in many cases financially supporting their teams and educational experience.”

Erskine started the women’s hockey program as a club team in 1998 at the request of Brock student Sarah Brooks (BSM ’01), two years before it became a varsity team. He coached the team along with Sandy Staniforth for more than a decade before handing over the reins. The team has evolved from having no home ice to playing at Merritton Arena to now calling Seymour-Hannah Arena home. Next year, the team will move into the brand new Canada Games Park at Brock.

Margot Page, who has been with Brock since 2012 and head coach since 2015, said it means a lot to finally be able to bring past and present Badger generations together.

“We’ve been working hard to connect for a number of years and this has ignited it,” she said. “It’s huge because hopefully people of the past understand how important they are to the successes of what’s happening now.

“It may have been so difficult for them at the time trying to start a team and find rinks and games to play, but they kept being relentless about it and because of that, we’re doing what we’re doing today.”

Page also hopes hearing the words from past players will help the current generation understand the foundation they’re laying.

“This current group can say ‘we’ve been able to establish we’re a good team, well-respected, good in the community and continue to lay that foundation,” said Page.

After watching the video Friday, fifth-year forward Carly Blomberg, a Community Recreation student from Timmins, said she’s happy to graduate from the team knowing it has made significant progress from where it was when she and her teammates arrived.

“I think everybody who has left this program has left it in a better spot,” Blomberg said. “We take a lot of pride in what we’ve been able to do the past few years with the support of everyone around us — from past players to the coaching staff to everyone who has been involved in the journey.”

All alumni are encouraged to support student-athletes competing in championship games, whether attending a live event that is taking place nearby or watching broadcasts online. Alumni are also reminded to keep their contact information updated to receive updates and exclusive offers, such as alumni discounts or complimentary tickets to Badgers Sports events, and more throughout the year. Follow @brockualumni on Facebook, Instagram and Twitter for updates.