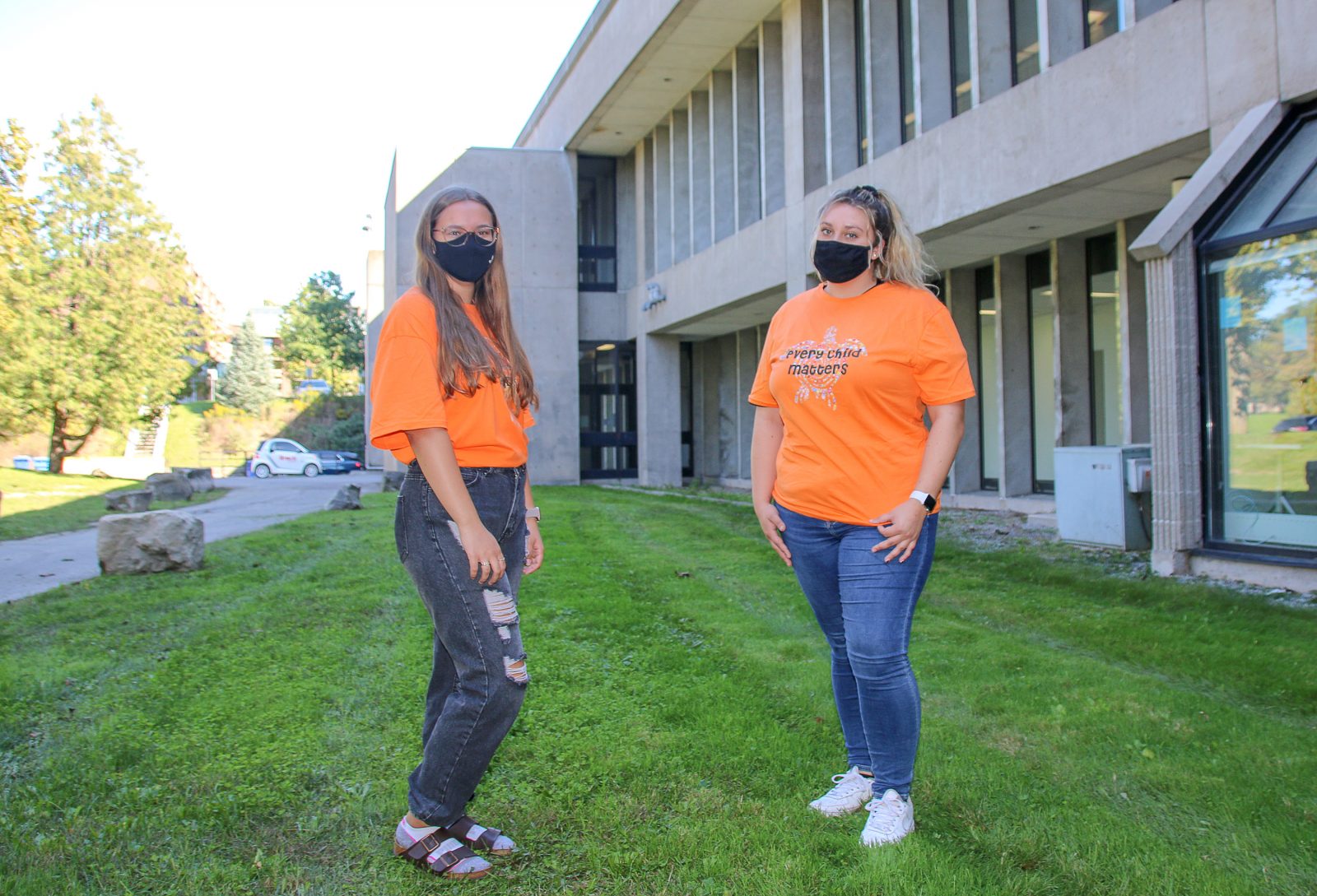 Brock University students Evelyn Dilworth and Kaitlyn Austin have each found ways to combine their Mohawk heritage with their studies through on-campus supports for Indigenous students.

Though they expected to further their education, Kaitlyn Austin and Evelyn Dilworth had no idea their university experience would also help to strengthen pride in their heritage.

The Indigenous students were both drawn to Brock for its academic programming, but quickly found another benefit to their university of choice: a support system eager to share in their culture and help them succeed on their journey.

With the University’s assistance, Austin and Dilworth have since each found ways to combine their Mohawk heritage with their studies and have connected with on-campus support staff they say often feel more like family.

“I found out about Aboriginal Student Services (AbSS) and started meeting with them the first week I got here,” said Austin, a third-year Medical Sciences student from Burford, Ont. “I just knew I needed to go there and connect with that community.”

Dilworth, a fourth-year Concurrent Education student from Burlington, was pleasantly surprised to learn how many resources were available to Indigenous students at Brock.

“There are so many staff and faculty you can go to and they are always willing to help in any way they can, especially in AbSS,” she said. “The pride they have in their culture has rubbed off on me. Spending more time with the staff and students there has made me feel more proud of who I am.”

“Without such support, Indigenous students can fall through the institutional cracks, end up feeling alienated and possibly even leaving the University,” she said.

While Austin and Dilworth feel resources and supports for Indigenous people at Brock are strong, they have not always felt supported by the education system.

“When I was in elementary school, I was bullied and called names because I was indigenous,” said Austin. “When people would find out I was indigenous, I could sometimes see their attitudes shift and certain assumptions arise.”

She feels the Brock community has been much more welcoming.

“People here are kind and actively want to learn about Indigenous histories,” she said. “It’s awesome to see how much the education system has changed in recent years and it’s definitely noticeable here at Brock.”

Along with regularly visiting AbSS and accessing its services, which include academic and cultural supports and activities, the pair have also seen support for Indigenous ways of knowing in their studies.

Austin and Dilworth have each decided to pursue a minor in Indigenous Studies, where traditional teachings are regularly at the forefront. Dilworth has also seen Indigenous perspectives showcased in her History classes, while Austin has seen the incorporation of Indigenous teachings in courses she is taking in the Faculty of Applied Health Sciences.

“In my Health in Canadian Society class, we often find more than one answer to questions that are deliberately open-ended,” Austin said. “In lectures, when we are asked a question such as ‘what is health?,’ we can incorporate that Indigenous style of teaching that explores discussion-based responses to see what each person in the class thinks.”

Similar to the support they have received inside and outside of the classroom, Dilworth and Austin are hopeful the Brock community will show its support to Indigenous communities as the University observes the first-ever National Day for Truth and Reconciliation on Thursday, Sept. 30.

Brock is encouraging people to wear orange shirts and to participate in an orange note display, where messages related to the day can be written, in the Rankin Family Pavilion as a way to demonstrate solidarity and stand in mourning with Indigenous communities. The University is also hosting a virtual resource that includes statements from various members of the Brock community and a ceremonial flag smudging video that serves as a catalyst for conversations about the tragic legacy of residential schools. For more information, visit brocku.ca/indigenous

“It allows people to get more educated on Indigenous histories,” Dilworth said of the day of reflection. “Wearing an orange shirt in remembrance of the terrible things that took place at residential schools is also a reminder for people to learn, especially when large institutions like Brock showcase that history in such a public way.”

Austin, who in addition to her studies also works as an assistant for Brock’s Vice-Provost, Indigenous Engagement, said she hopes the widespread support for Indigenous Peoples that has begun this year will continue in the future.

“It’s a hard day, and it’s been a hard year,” she said. “Many of us need space to be with our communities, but I hope it’s something that is continued throughout the years and that eventually we can gather together in person to mark this day in the future,” she said.

As Austin and Dilworth continue to proudly share their culture with those around them, they are hopeful that all members of the Brock community will continue to learn more about Indigenous histories.

“You don’t have to be an Indigenous person to visit AbSS,” said Austin. “Everyone is welcome to listen and learn about things they may not have learned about growing up.”

While actively striving to welcome and teach others is also a focus for Dilworth, she said the most important development she has experienced is the freedom to explore her own identity within a safe and supportive environment.

“I don’t define my experience here solely as an Indigenous student,” she said. “But being able to go down to AbSS, participate in my Indigenous Studies classes and be part of the community at Brock forms a tie that weaves together and strengthens my entire university experience.”