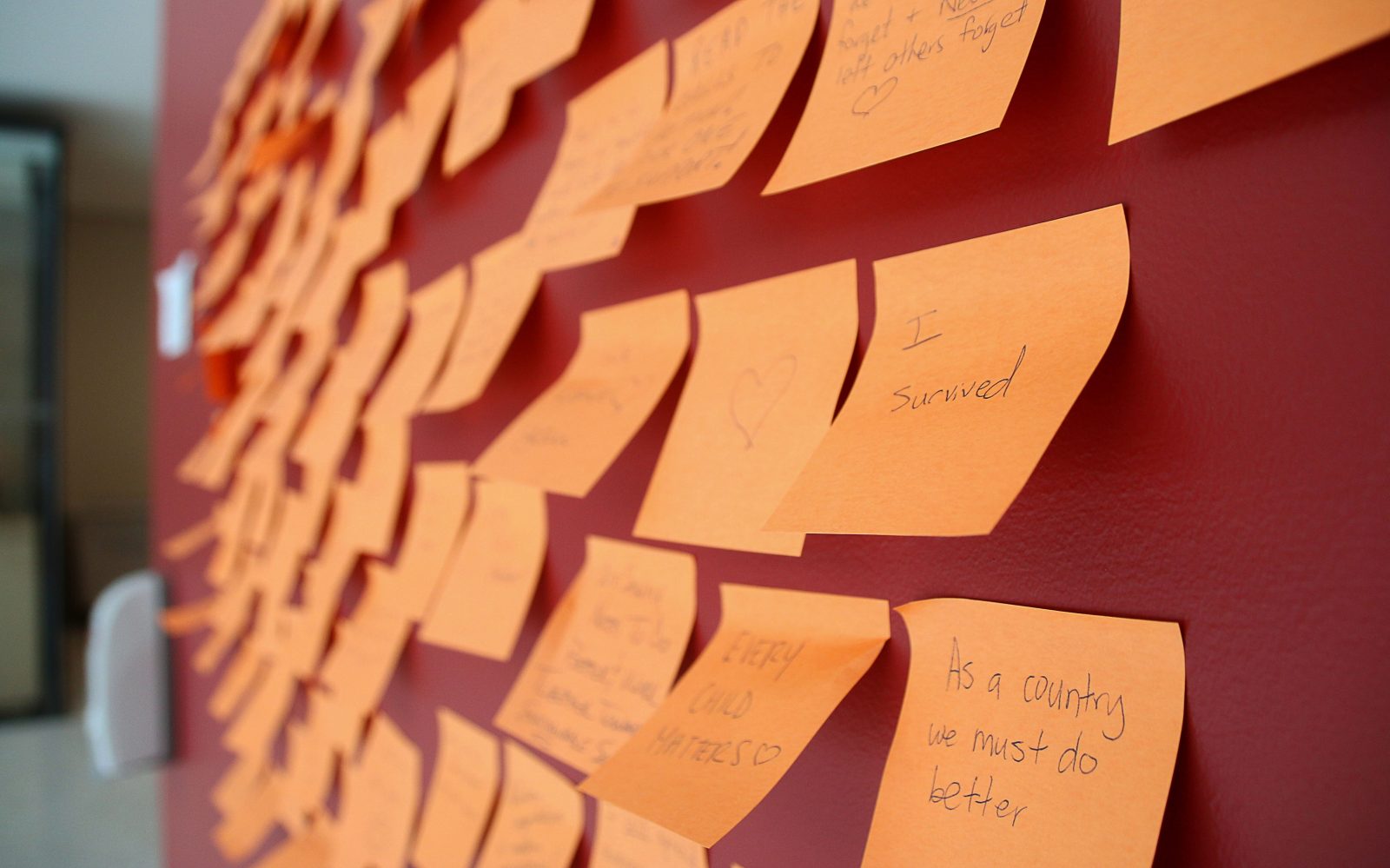 Members of the Brock community wrote powerful messages of support and survival that were posted on a wall in the Rankin Family Pavilion to mark National Day for Truth and Reconciliation.

A series of virtual statements, a wall filled with messages of support and orange shirts in every corner of campus marked the first-ever National Day for Truth and Reconciliation at Brock University.

The Brock community stood in solidarity with Indigenous communities Thursday, Sept. 30, wearing orange and reflecting on the meaning of the newly established statutory holiday.

The day provided an opportunity to recognize the multigenerational legacy of the residential school system in Canada, which separated more than 150,000 Indigenous children from their families and forced them to attend schools where various forms of abuse took place. Many children did not survive.

To allow members of Brock’s Indigenous communities to spend the day with those they are closest with, a website was created filled with resources and messages in lieu of an in-person gathering. The site includes a recorded ceremonial smudging of Indigenous flags, which were then lowered to half-mast while an honour song was sung; links to resources where more can be learned about residential schools; and an opening and closing statement from Peter Beaucage, an Elder from the Nipissing First Nation.

Also featured are a series of videos in which representatives from the University and its Indigenous communities shared their thoughts and feelings on the day in hopes of sparking further conversations on and off campus. 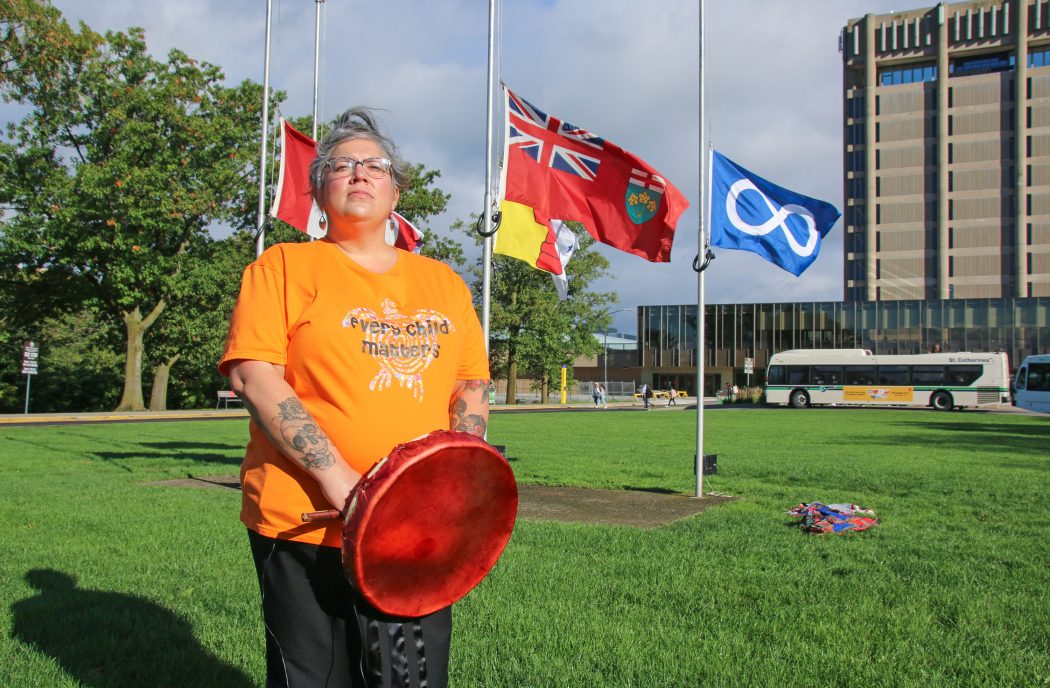 Robyn Bourgeois, Brock’s Acting Vice-Provost, Indigenous Engagement, participated in a flag lowering ceremony in advance of the National Day for Truth and Reconciliation that is featured on a new website of resources for the Brock community.

In her recorded message on the site, Brock’s Acting Vice-Provost, Indigenous Engagement Robyn Bourgeois said the day is a difficult one for Indigenous Peoples.

“This is a hard day for many of us,” she said. “I pray for all of the Indigenous children, past, present and future, who have for too long bore the brunt of the Indian residential school system. I pray for the families, the parents and communities who have lost generations of their children to this system.”

While encouraging non-Indigenous people to explore the final report of the Truth and Reconciliation Commission (TRC) of Canada and its recommendations, Bourgeois noted that Thursday was also a time to celebrate the perseverance of First Nations, Métis and Inuit Peoples.

“We are still here, and I also hope we can find moments to celebrate Indigenous resilience,” she said.

Brock’s Interim President Lynn Wells spoke of the need to fully acknowledge and learn from injustices of the past and to commit to substantive change going forward.

“Like many Canadians, I’ll make time on Sept. 30 to remember those lost children and to reflect on the shameful legacy of the past,” she said. “This National Day for Truth and Reconciliation, however, is also an opportunity to think about how we can all contribute to a more positive future for the relationship between Indigenous and non-Indigenous peoples in Canada.”

Wells said the University is committed to doing its part to contribute to that positive future.

“Brock University is putting in place new programs and services to improve access to post-secondary education for Indigenous students and to support them throughout their university years, leading to higher recruitment, retention and graduation rates,” she said.

Overseeing the display in the Rankin Family Pavilion, where members of the Brock community were invited to learn more about Indigenous histories and to write notes of truth and reconciliation, she was moved by the messages and the many orange shirts she saw passing by.

“Everyone from across campus has been reaching out to see how they can help and get involved and that has been awesome,” she said. “Wearing orange shirts on Sept. 30 has always been a big thing here in Aboriginal Student Services and in Indigenous education in general, but now it’s everywhere. It’s in the community and so many people are taking the time to learn. It’s a horrific legacy that people need to learn about. I want the orange shirts to be as obvious a symbol for people as the poppy is on Remembrance Day.”

Though the National Day for Truth and Reconciliation is being marked as a statutory holiday for the first time, Orange Shirt Day has been observed for years and has its origins in 1973, when Phyllis (Jack) Webstad was stripped of a new orange shirt purchased by her grandmother on her first day at the St. Joseph Mission residential school in Williams Lake, B.C., leaving her feeling worthless and insignificant. 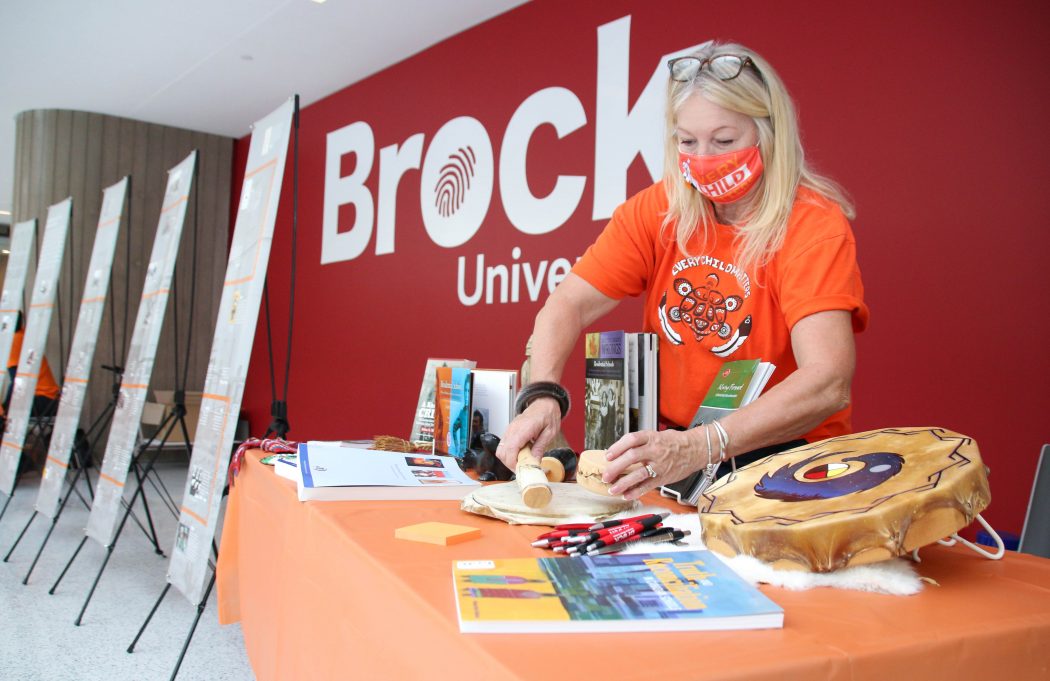 Aboriginal Events Co-ordinator Cindy Biancaniello sets up the display featured prominently in the Rankin Family Pavilion during the National Day for Truth and Reconciliation on Thursday, Sept. 30.

Biancaniello hopes the Brock community will consult the virtual site and other resources to learn more about residential schools in Canada as well as Indigenous histories.

“You can’t move forward without knowing the past,” she said. “To know and understand the truth is absolutely necessary before we begin to reconcile. It’s about education and what better place for that to begin than walking in the front door of this University.”

Members of the Brock community can still show their support by taking pictures of themselves wearing orange shirts and sending the photos to Biancaniello at cbiancaniello@brocku.ca to be shared on the Aboriginal Student Services social media platforms.

Brock’s online resources for the National Day for Truth and Reconciliation website are available at brocku.ca/indigenous/ndtr