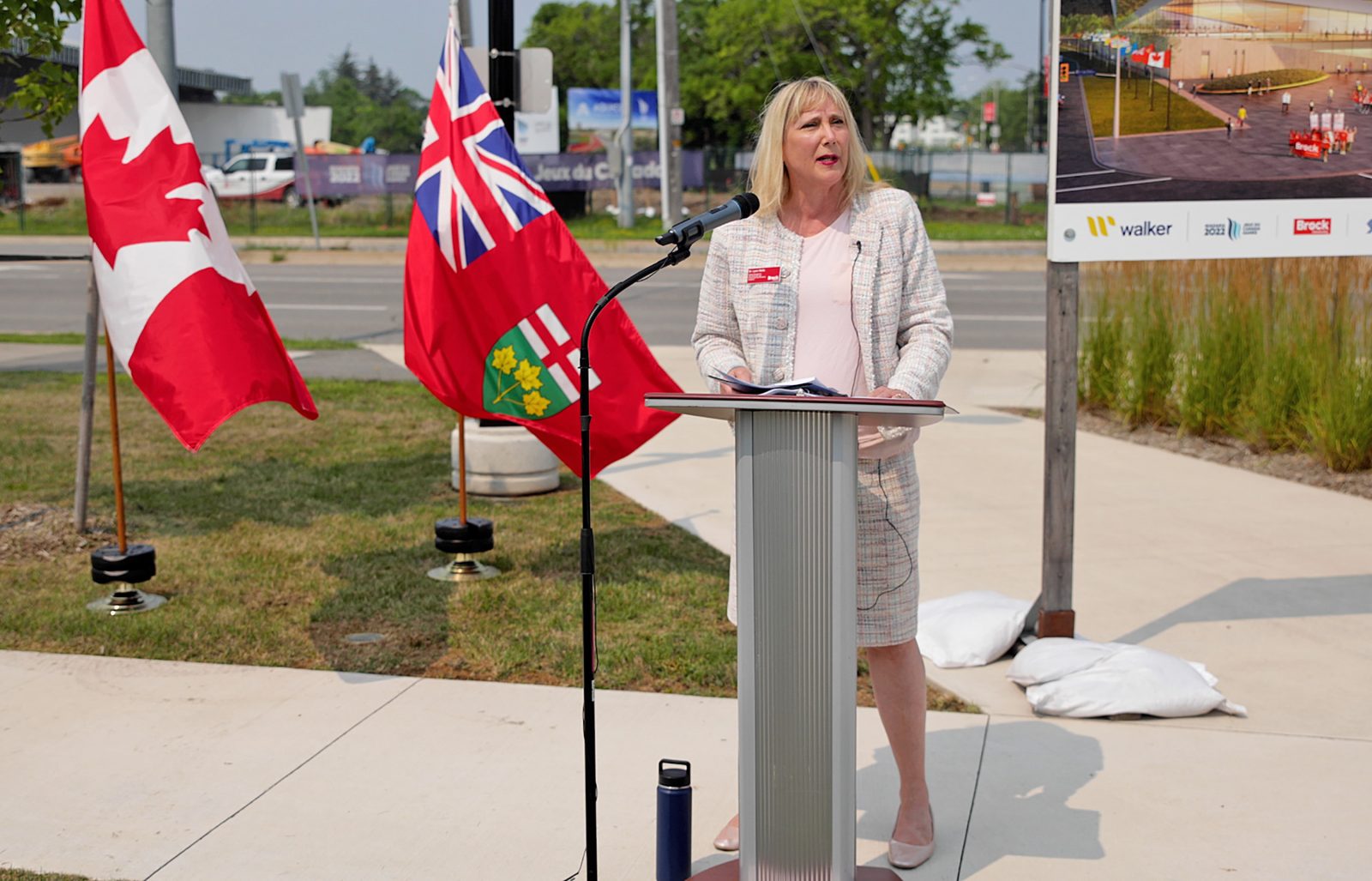 Interim Brock University President Lynn Wells speaks at an event Monday, July 19 to announce that the 210,000-square-foot Canada Games Park will be named the Walker Sports and Abilities Centre.

Brock University is celebrating an investment made by the Walker family in support of the Canada Summer Games that will see the Games facility on campus named in their honour.

The Games consortium announced Monday, July 19 that the 210,000-square-foot facility at a site near the Sir Isaac Brock Way campus entry will be named the Walker Sports and Abilities Centre, in recognition of a $3-million investment made by the family. In addition, the facility’s entry plaza will be known as the Walker Founders Plaza.

“Thanks to the generous support of the Walker family, current and future generations of Niagarans and Brock students will be the beneficiaries of the Canada Summer Games legacy,” says Brock Interim President and Provost Lynn Wells, who joined other leaders at an announcement event at Niagara Region headquarters.

“As a founding partner of the Games, Brock University is honoured to welcome the Walker family as we work as a community to celebrate these once-in-a-generation opportunities. The Walker Sports and Abilities Centre is a most fitting addition to the campus gateway.”

For many years, Brock students, faculty and staff have been the direct beneficiaries of the generosity of the Walker family.

The Marilyn I. Walker School for Fine and Performing Arts in downtown St. Catharines is named in honour of Marilyn I. and Norris Walker’s landmark 2008 gift. The Jack and Nora Walker Canadian Centre for Lifespan Development, the Walker Sports Complex and several other student awards, scholarships and bursaries have been supported by the family and related organizations.

Held every two years, the Canada Summer Games brings together up-and-coming Canadian athletes from across Canada. The Games begin Aug. 6, 2022 after a one-year delay due to the COVID-19 pandemic.

The Walker Sports and Abilities Centre will include a sport performance centre, the Brock-Niagara Centre for Health and Well-being, a twin-pad arena, a 200-metre indoor track, a cycling and storage pavilion, sport offices and a multipurpose fieldhouse with a parasport gymnasium and combative sport centre. Additionally, six competition beach volleyball courts and a 400-metre track-and-field outdoor facility will be located at the site.