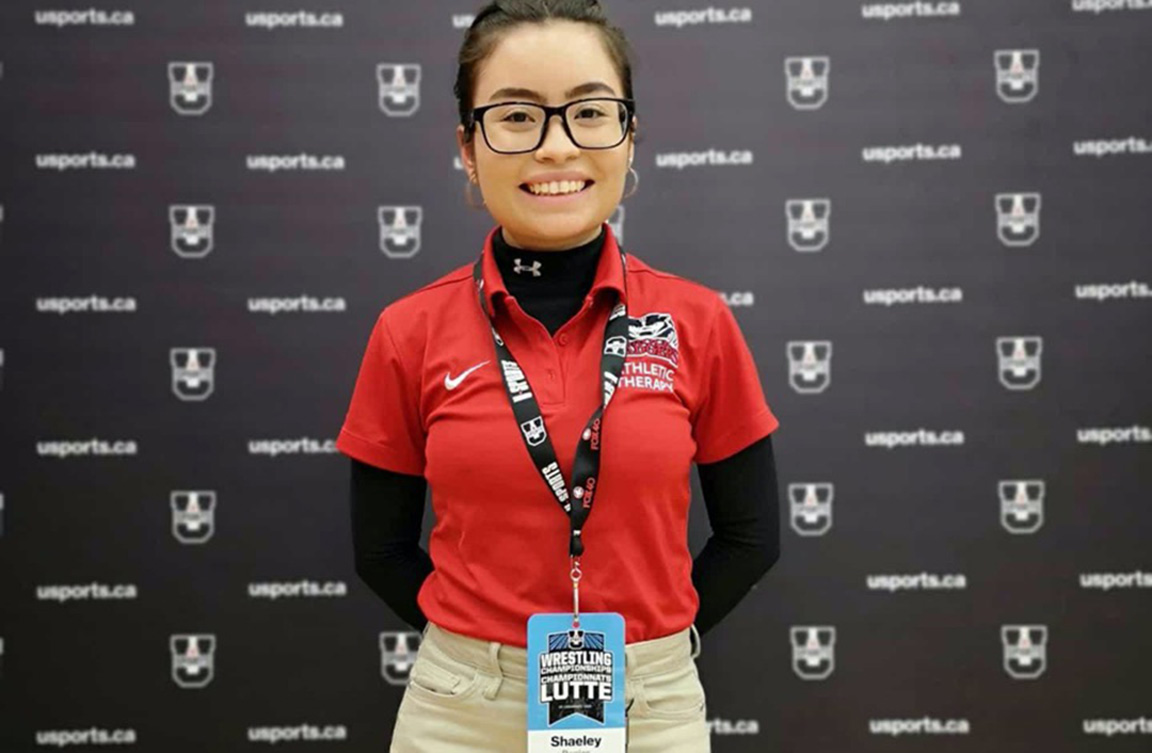 For Shaeley Barrios, experiential learning opportunities with Brock Sports Medicine during her time studying Kinesiology at Brock University helped solidify her decision to pursue athletic therapy as a career.

On Friday, June 18, Barrios moved one step closer to her goal as she was one of 3,300 graduates during Brock’s 109th Convocation, earning her Bachelor of Arts in Kinesiology from the Faculty of Applied Health Sciences.

“My studies at Brock were never easy. I had to work hard to reach my end goal, which is to become a Certified Athletic Therapist,” said Barrios. “The reason I chose Kinesiology was because it was the only thing that directly connected me to sports.”

Barrios will take the next step to prepare her for a career in athletic therapy as she continues her studies in Sheridan College’s Athletic Therapy program in September.

After graduating from Cathedral High School in Hamilton, Barrios was faced with the dubious decision of which university to select and where she wanted to concentrate her studies.

Barrios saw everything she needed to make a choice after taking a tour of the Brock campus.

“After seeing the campus and having that welcoming feeling in the building, I knew I belonged at Brock,” she said. “Then, once I learned more about the Brock Sports Medicine program, it reassured me that athletic therapy was the career choice for me.”

She dove into the practical experience of working closely with a Badgers varsity team and duties in the Varsity Trainer’s Room, including pre-event taping, wrapping and sport massage while assisting a lead athletic therapist with acute injury management.

“Shaeley’s work ethic and positive attitude set an excellent example for the other student therapists,” said Jim Bilotta, Brock’s Head Athletic Therapist. “She’s always willing to help and goes beyond the call of duty to support the team.”

After working with the Brock men’s and women’s cross-country teams, Barrios’ dedication to the field earned her an opportunity with the Badgers’ illustrious varsity wrestling program.

“I was impressed with Shaeley’s commitment to our cross-country team and her ability to work independently,” said Bilotta. “I asked her to help with wrestling the following year because I wanted that kind of commitment with the wrestling team. She immediately took charge and won the respect of the student-athletes, coaches, co-student therapists and the entire BSM lead staff.”

Barrios helped the Badgers stay on the mat as she travelled with the team around the country as they captured Ontario University Athletics and U SPORTS championship banners. She also garnered experience with Wrestling Canada at the 2019 Olympic Trials in Niagara Falls.

Barrios said the best part of working with the wrestling team is being exposed to high-performance athletes who compete at the national, international and Olympic levels.

“I grew professionally, academically and personally working with them. I learned that if you put in the work and give it everything you’ve got, then you can succeed,” she said. “I try to reflect that in my academics.”

After registering marks in the high 90s among the athletic therapy courses of her Kinesiology program, Barrios knew the profession was for her.

“It meant so much to me because it was my highest grades in all of my years at Brock,” she said. “I struggled so much in the first year to the point that I was considering dropping out, but I continued and persevered.”

As Barrios continues to bolster her knowledge in sport medicine, she has dreams of working on a medical team at the Olympics.

“I’m in the process of building my resume by volunteering at events as a student therapist,” she said. “My dream is to become a Certified Athletic Therapist and one day reach that Olympic dream to be part of the medical staff. That is my goal now that I am working towards.”