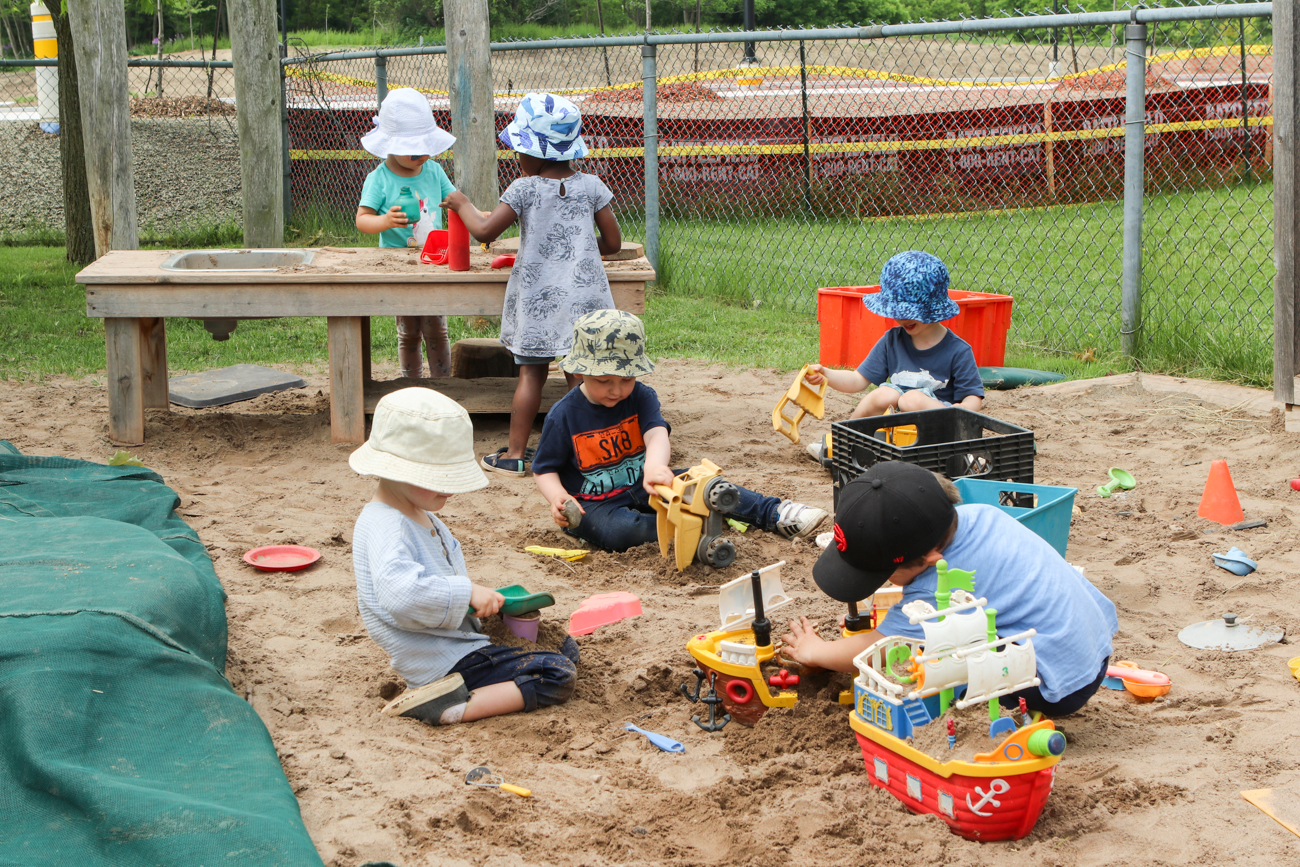 Those are just some of the moments Brock University’s Acting Director of Ancillary Business Operations cherishes from his childhood days at the Rosalind Blauer Centre for Child Care (RBCCC), which he attended from 1982 to 1986.

Pigeau’s mother was a student at the time, so having him and his older sister at the child-care centre on Brock’s main campus helped her get through school. Years later, when he and his wife had children of their own, they chose to send them to RBCCC.

“It has a reputation in the community as being the day care you want to get your kids into,” Pigeau said. “It is a progressive centre that prepares children for kindergarten. The staff know how to work with the kids to get the best out of them.”

Over the years, countless Brock students, faculty and staff, as well as community members, have enrolled their children at the Centre, which marked its milestone 50th year in early 2021. 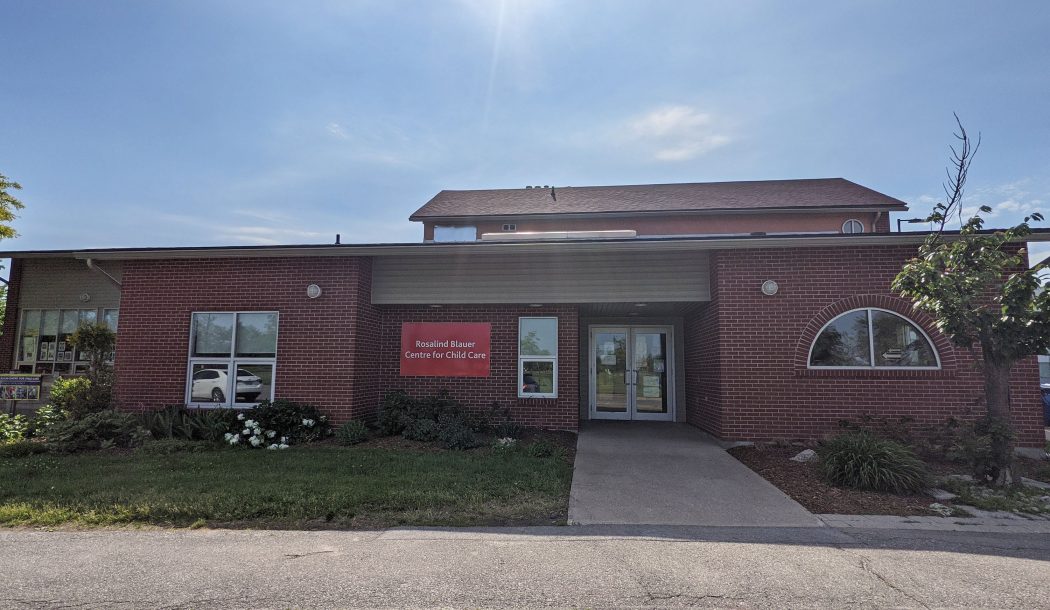 The Rosalind Blauer Centre for Child Care at Brock University moved into its own dedicated building in 1996 — 25 years after it opened in the basement of the Schmon Tower.

Five decades have passed since the Centre was founded, but the principles on which it was built remain strong today.

“From the very beginning, it was focused on offering something more than just babysitting,” said Helene Randle, who has been RBCCC’s Executive Director for the past 18 years. “The Centre’s founders wanted to provide children with a safe, caring and stimulating environment of learning and exploration while parents studied or worked. It’s a philosophy that continues today.”

It was in 1971 that a co-operative preschool opened in the basement of the Schmon Tower. Several Brock faculty and staff had identified a need for child care at Brock, including the Centre’s namesake Rosalind Blauer, a former Economics professor. A maximum of 50 children aged two to five attended one of two available half-day sessions. Parents paid minimal fees and were asked to volunteer a half-day each week to help the sole supervisor care for the children and maintain the cleanliness of the Centre.

Physics Professor Edward Sternin believes RBCCC’s roots in volunteerism helped create a caring and connected community. All three of his children attended the Centre over the years.

“There was always this personal connection with the teachers and other parents,” he said. “Parents would spend time in the Centre helping out, and I think that may be part of the secret of why it always felt so intimate.”

Over the years, RBCCC moved to the lower level of Welch Hall and then to its own dedicated building in 1996 at its current location, close to the forest. It also transitioned from a volunteer co-op model to a licensed, non-profit child-care centre with trained early childhood educators (ECEs) and expanded the age range of children to three months to five years old.

“We recognize the importance that all staff have the same knowledge, training and experience with young children so that we can provide the highest quality program possible,” Randle said. “It’s not a requirement for licensed child care that everyone have their ECE, but it is for us.”

Children at RBCCC are encouraged to learn through play. They explore and manipulate their environment through experimentation and active involvement.

“Sometimes people think learning through play means just letting them play and they’ll naturally learn, but this isn’t the case,” Randle said. “The educators build on the children’s interests to facilitate play by posing questions and challenging their skills and abilities.”

The Centre offers popular educational programs, such as Jolly Phonics, Kindermusik and Seeds of Empathy, which expand on the literacy and math-focused programming that is at the core of RBCCC.

Children also have access to four raised garden beds at the Centre and three of Brock’s community garden plots. Every spring, children plant fruits and vegetables in the gardens, care for them and then help harvest them. Gardening and food preparation is incorporated into summer programming, and the Centre’s chefs use the produce to prepare the children’s snacks and lunches. Harvested vegetables and fruit are also frozen and preserved for use throughout the winter months.

“We find when children grow the food themselves, they are more open to eating food they typically wouldn’t,” Randle said. “We grow a lot of cherry tomatoes, and the children will eat them off the vine.”

The outdoor nature-based playground also helps children transition to the Centre’s forest school program, an alternative to junior kindergarten that was introduced in 2015 as a year-long research project with Education Professor Deborah Harwood. Twice a week at 9 a.m., the eight children who are part of the program hike to the adjacent forest to set up camp in a classroom made up of leaves, logs and rocks. Rain or shine, they spend until 1 p.m. exploring and learning in nature.

Educators who lead the forest school program are trained as both ECEs and forest school practitioners with Forest School Canada. Like the traditional learning that takes place the remainder of the week, learning is self-directed and play-based, with the curriculum responding to students’ interests. Children learn how to evaluate choices, solve problems and make decisions while considering appropriate risk.

Randle said she has found that children connect with each other differently since the Centre has incorporated the forest school.

“Although the program is focused on making connections with nature, there’s also a focus on the children collaborating with each other and making decisions as a group with limited adult intervention,” Randle said. “The children tend to have a lot more empathy and work together in a more positive way because they’re often helping each other. For example, one child may excel at climbing a tree and they’ll show a friend how to do it.”

After a four-month closure last spring due to the COVID-19 pandemic, even more of the Centre’s programming has become outdoor based. Children are outside for two hours each morning and another two to three hours each afternoon.

The Centre is currently operating with a reduced capacity of 35 children to follow COVID-related public health guidelines. Randle is hopeful the Centre will return to its normal capacity of 56 in the fall.

Parents interested in enrolling their child in the RBCCC are encouraged to register in advance of their need. The wait for a child-care space is about 12 to 18 months.

According to Sternin, the wait is worth it.

“I firmly believe that no other day care would have done as good and as personal a job in educating my children,” he said. “All of them turned out academically inclined, and part of the reason is the RBCCC and their productive learning environment.”

To learn more about the Rosalind Blauer Centre for Child Care, visit brocku.ca/childcare