FACULTY FOCUS: Karyn Taplay aims to see care through the eyes of patients 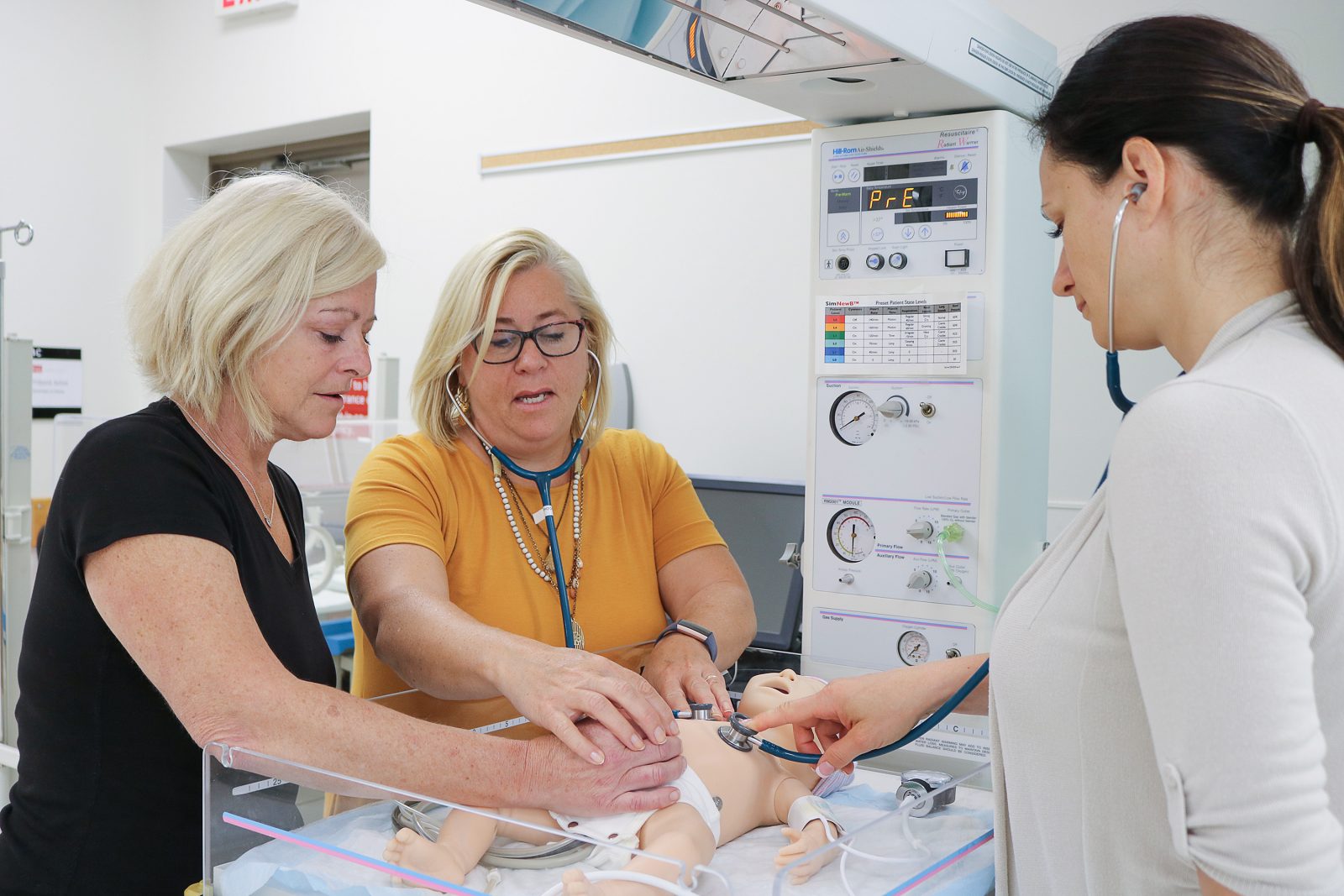 Brock Associate Professor of Nursing Karyn Taplay (centre) has been using simulation to teach the next generation of nurses.

The elevator’s signature ‘ding’ was their cue.

When the doors swung open, the nurses on the other end never knew what to expect.

Each day was different in the high-volume labour and delivery ward where Karyn Taplay worked. Only a few kilometres from the U.S.-Mexico border, the hospital in McAllen, Texas, attracted women from all backgrounds looking for a safe place to welcome new life into the world.

This often meant treating mothers-to-be who received no prenatal care and whose bodies were physically exerted not only from their pregnancy, but also from the dangerous journey they’d embarked on to enter the country to give birth.

“It was a great training ground,” says Taplay, now an Associate Professor of Nursing at Brock University. “You never knew what kind of patients you’d see, the stories you’d hear or what their experiences were.”

It was her time in the organized chaos of the ward that taught Taplay that every patient has a story — a message that can so easily be lost in the rush of an emergency.

She now works to teach the next generation of nurses that front-line health-care workers, in so many ways, can have an impact on the lives of their patients. 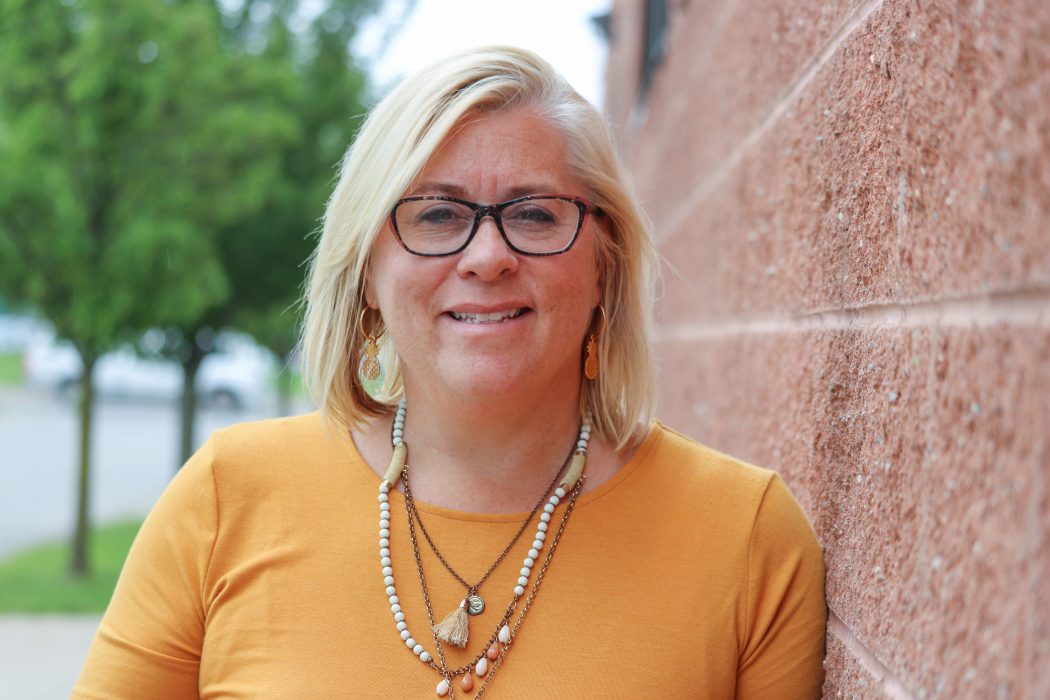 Taplay knew from her high school days that nursing was in her future.

“I really liked connecting with people,” she says while reflecting on a senior-year nursing co-op that helped to solidify her path.

After graduation, she went on to the University of Toronto with plans to work in a labour and delivery unit somewhere in that bustling metropolis upon completing her studies.

“I had it all mapped out,” Taplay says, “but then the nursing surplus hit.”

An abundance of nurses meant no local job prospects and the Hamilton native had to begin looking at other options.

She went to an international job fair, where she was interviewed on the spot and offered a full-time position in labour and delivery at a hospital in Texas.

With a move to the southern U.S. on the table, Taplay, then 23, and fiancé Jeff moved up their wedding plans, married on a Saturday and left for Texas the Monday after.

“We were so young, and we didn’t know the area. It’s not like today when you can just check everything out on the internet,” she says. “I remember driving into the city and my husband asking whether I thought the apartment we put a deposit on even existed.

“There was a huge element of risk.”

But the leap of faith paid off. The pair laid roots in Texas, building successful careers and having two children before ultimately moving back to Ontario 13 years later.

Taplay thrived in the fast-paced hospital where she worked, which saw about 600 deliveries each month.

“We were running ragged delivering babies. It was fun, it was crazy, and I loved it,” she says.

But even while working in a rewarding career she was passionate about, Taplay couldn’t help but feel as though something was missing. To help fill the void, she began orienting new staff as well as students from the University of Texas-Pan American (now University of Texas Rio Grande Valley) who entered the hospital on clinical placements.

Seeing Taplay in action and recognizing her knack for working with young learners, a university faculty member encouraged her to pursue teaching. After about two years of prompting, the professor’s persistence paid off and Taplay enrolled in a master’s program in pursuit of a teaching career.

“She really saw something in me that I didn’t immediately see in myself,” Taplay says. “She was pretty instrumental in moving me in this direction.”

With two months to go before graduation and a nursing shortage underway, a special exemption was granted that allowed Taplay to be hired on as a full-time faculty member at University of Texas-Pan American.

In addition to teaching the state’s future nurses, Taplay continued to work part time in different areas of nursing.

“I was always more focused on areas where I could be one-on-one with my clients and really kind of go through their experience with them,” she says. “I was fascinated by their experience and how nursing care and the hospital system impacted them. When I look back now, I think that was a big driving factor as to where I’m at now.”

After moving back to Canada for another job opportunity, Taplay set her sights on working at Brock.

In 2007, she was offered a part-time clinical instructor position before later getting hired on as a full-time faculty member. This also led to her return to school to obtain her PhD in Nursing.

Both her research and teaching have since focused on integrating simulation into nursing.

“I find simulation fascinating,” she says. “It keeps me going back to my roots, always wanting to know what the patient’s experience is.”

To that end, Taplay has developed a spyglass methodology that sees her students participating in nursing scenarios with a simulated patient — one of Brock’s High-Fidelity Simulation Mannequins — wearing glasses that record audio and video from the patient’s perspective.

The reflective practice tool allows students to see first-hand the care they’ve provided, including how they looked and sounded to their patient.

“Students watch the video of themselves, they can hear their voice, intonation and cadence, and think about their word choice,” Taplay says. “They can really evaluate the care they provided.”

The only way to truly have client-centred care is to incorporate the patient’s experience into the reflective practice, she says. To further enhance this learning method, she hopes to see simulation evolve to include additional senses down the road.

Currently on sabbatical until the end of June, Taplay has been working on a research project with Niagara Health that introduces the spyglass methodology into the active patient experience. As of July 1, she will become Brock’s Department of Nursing Chair.

Taplay often shares her experiences with her students, hoping to inspire them to “look for the excitement, the stories and the narratives in nursing themselves.”

“I think it’s really the connection to the patient that keeps you going in this profession,” she says.

Over her decades-long career, Taplay has had patients and patient experiences that she will carry with her forever.

“They’ve become part of who I am,” she says. “Having the privilege of caring for people when they’re in labour and they’re bringing new life into this world has humbled me and allowed me to really be the person I am now.”

She hopes to encourage her students to embrace the uniqueness of each patient encounter.

“While they’re there to provide care to somebody, they actually have as much if not more to learn from that patient than the other way around,” she says.

“I want them to understand they may just enter into a patient’s narrative for one day, maybe only a couple of hours, but they have the ability to change that person’s life. Being open to those stories is probably one of the most rewarding and humbling things they can do.”