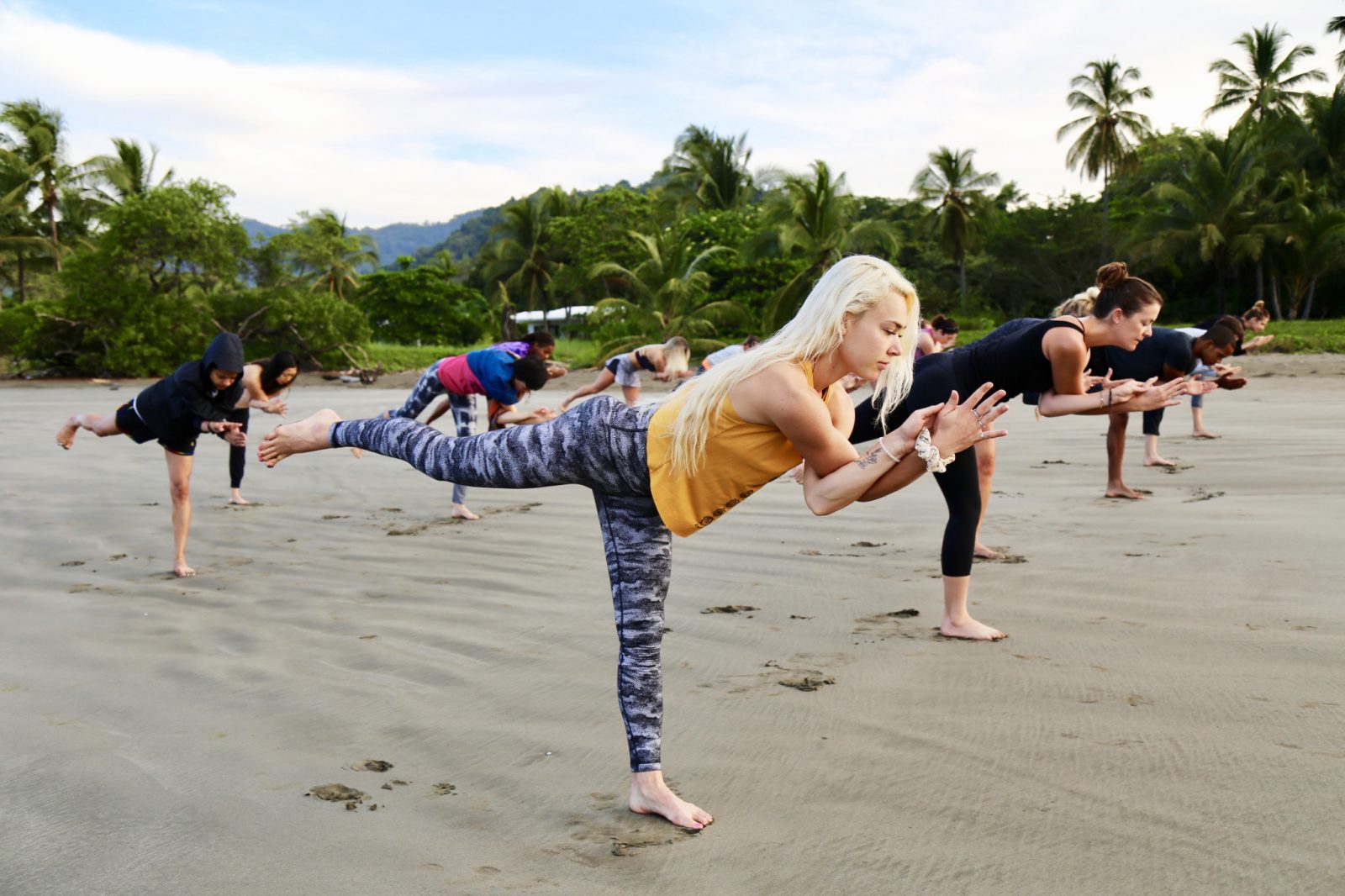 After graduating from Brock University in 2019, Abbey Morris became a yoga instructor and uses her discipline to help others who are recovering from eating disorders.

Abbey Morris (BA ’19) has had a complicated dance with mental health.

The former Brock University student-athlete spent years plagued with anxiety and depression, ultimately leading to an eating disorder. But after facing her struggles head-on, the champion cheerleader has harnessed her strength in hopes of encouraging others to also get the help they need.

“Throughout my life, mental health has been both invisible and undetectable, and then undeniably apparent to the eye,” said Morris, who was diagnosed with anorexia nervosa during her final year of university.

As Bell Let’s Talk Day approaches on Thursday, Jan. 28, Morris is speaking out about confronting her own inner conflicts and sharing how Brock University and its cheerleading team helped her get through some of the darkest times of her life. 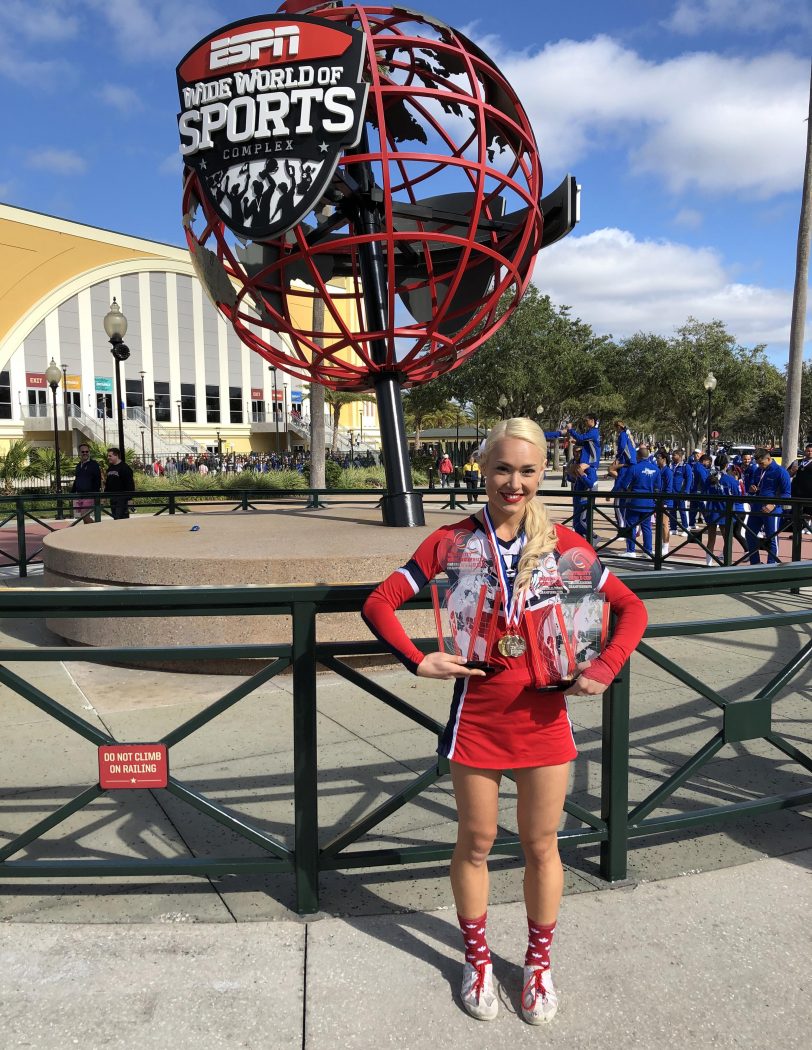 Growing up in Niagara surrounded by a loving family, Morris spent her childhood competing in multiple sports and activities from rep hockey to dance. She’s been physically strong for as long as she can remember, and never feared the bends, twists and flips required of a gymnast.

“I used to be afraid of the ball as a youth soccer player, but spontaneously changing the orientation of my head to my toes was never intimidating,” she said. “These acrobatic thrills never wore off.”

That fearlessness and endless energy gave Morris an edge in the world of cheerleading. She made the roster of her first elite team in 2010 and competed at high levels of cheer throughout her career.

Before attending Brock, Morris was a standout athlete for two cheerleading clubs — Niagara Cheerleading and Scorpions Niagara — and served as the captain of her cheerleading team at Saint Francis Catholic Secondary School in St. Catharines.

In her four years at Brock, she helped elevate the Badgers Cheer team to new heights as they won at the ICU University World Cup Cheerleading Championship in Orlando, Fla., with gold, silver and bronze medals. She also played a key role on the inaugural Canadian team that competed at the FISU World University Cheerleading Championship and earned a bronze medal in Poland.

Morris would often get swept up in the lively world of cheerleading, but behind the smiles brought on by the overtly positive nature of the sport was a deep mental health struggle.

“I had a good life and my family was always caring and supportive, so I felt guilty for feeling unhappy,” Morris said. She attended therapy sessions and quietly took prescribed Prozac to battle what she called “an unsteady sense of self.”

She only used the words anxiety and depression in the doctor’s office, not daring to speak them beyond the exam room doors.

“Speaking like that about myself out in the world felt inconceivable,” said Morris, who didn’t feel deserving of help. “Like I would be branded as the girl crying wolf, or worse, one just looking for attention.”

She became obsessed with controlling the way her body appeared and the number on the scale, and developed a compulsive need to exercise while restricting food intake.

“The wars in my head slowly manifested into physical complications in my body,” Morris said.

She entered her final year as co-captain of the Badgers Cheer team looking gaunt and unwell. It struck fear in the people around her, causing her friends, family and teammates to ask questions and make comments about her health. Her friendships became strained and she recalled the walls she built to keep others out.

“I can still see myself sitting across from the therapist, who I still see to this day, with my arms crossed and barely complying to participate on behalf of the friends who set up the appointment out of concern,” she said. “I refused to speak the words ‘eating disorder.’”

The situation took its toll on Morris’s body, impacting her ability to compete and ultimately sending her for emergency bowel surgery.

“I wasn’t truly nourishing myself and I was very disconnected from my body,” she said.

Cheer head coach Tara Savoie, who was there for Morris throughout this challenging time in her life, called it “extremely difficult” to see one of her athletes struggling.

She helped Morris connect with Brock Sports and the proper professionals who could help her on her road to recovery.

Savoie frequently reassured Morris that both the team and Brock Sports staff were always there to listen and support her.

Following her successful surgery and having accepted that help was needed, Morris began her path to wellness.

“My time at Brock opened my eyes to a magnitude of resolutions for what seemed like an insolvable problem,” she said. “The bravest words one could say is ‘I think I need your help.’ Bravery is not pushing your feelings down and using a smile as a Band-Aid. It’s not saying ‘never mind’ or ‘I’m fine.’ We need to abruptly stop the notion that to be human and feel human is wrapped in weakness, shame and failure. I know all too well the feeling of not wanting to say it out loud.”

Morris said she witnessed an evolution of openly talking about uncomfortable subjects, such as mental health, during her time at the University. That progression has continued, she said, and has rightfully earned Brock a first-place ranking for student mental health resources among all comprehensive universities in Canada, according to the national Maclean’s University Rankings.

“By the time I was nearing graduation, not only was the conversation about mental health getting louder, but I was also no longer afraid to participate in it,” said Morris, who earned her Bachelor of Arts in Media and Communication Studies, including a minor in Sociology. “All of these services existed, yet I lacked the awareness that they could be talking to me. I had a vicious story of myself for a long time and took a while to accept mental health into the narrative.

“The close-knit community at Brock always created this feeling of a safe space for me. It made a difference in what I was going through,” she said.

That sense of safety and support is woven into the fabric of Brock University.

“In Brock Sports, we want our student-athletes to know they are not alone,” said Emily Allan, Interim Director of Brock Sports. “Abbey’s experience is not unique — there are many others like her, and we want those people to know we are here for them.

“It is not easy to be a student-athlete,” Allan said. “Balancing academics and athletics is no easy feat and requires an immense amount of focus, drive, discipline and time management, not to mention physical energy. Our coaches and staff recognize this and want you to know we are always here to listen, to support and to help direct you to the proper resources and supports you need.”

To learn more about the many mental health resources available at Brock, visit brockmentalhealth.ca or brocku.ca/swac

Morris has now dedicated her life to helping others find a sense of well-being. She works as a yoga and meditation instructor who specializes in teaching people going through eating disorder recovery. She recently raised $1,000 for Body Brave, an eating disorder treatment centre in Hamilton, through teaching virtual yoga classes.