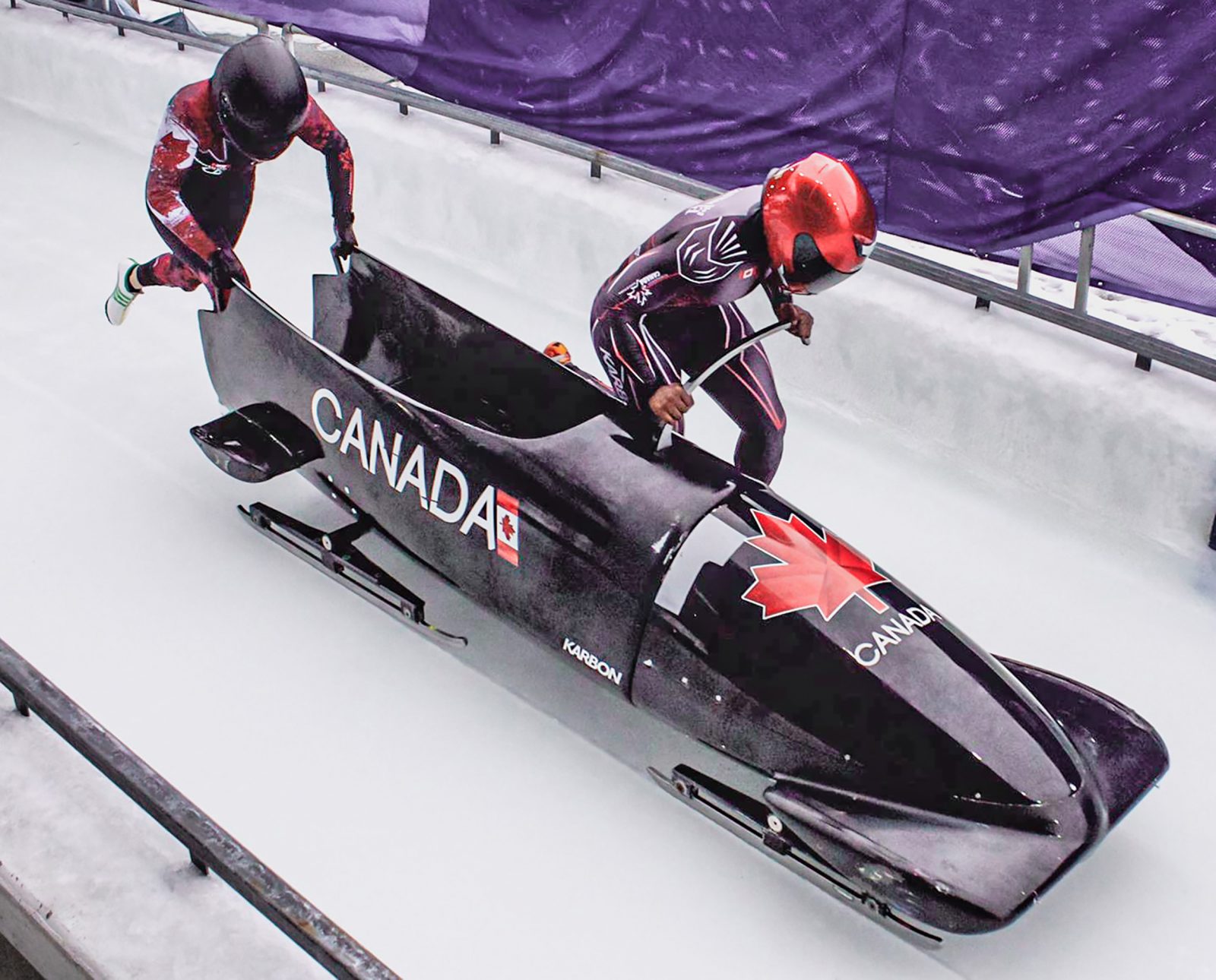 Niamh Haughey (left), who was named to national bobsleigh team as a brakeman, is seen here with pilot Cynthia Appiah during a training run with Bobsleigh Canada Skeleton.

A dual-sport athlete at Brock University has added a third sport to her resumé with dreams of competing in the Olympics one day.

Niamh Haughey, a 22-year-old Physical Education student from Scarborough, was one of 33 athletes named to Canada’s national bobsleigh team for the 2020-21 season.

Haughey looks to make her mark on the Development Bobsleigh Team as a brakeman as she works towards her goal of making the senior team. 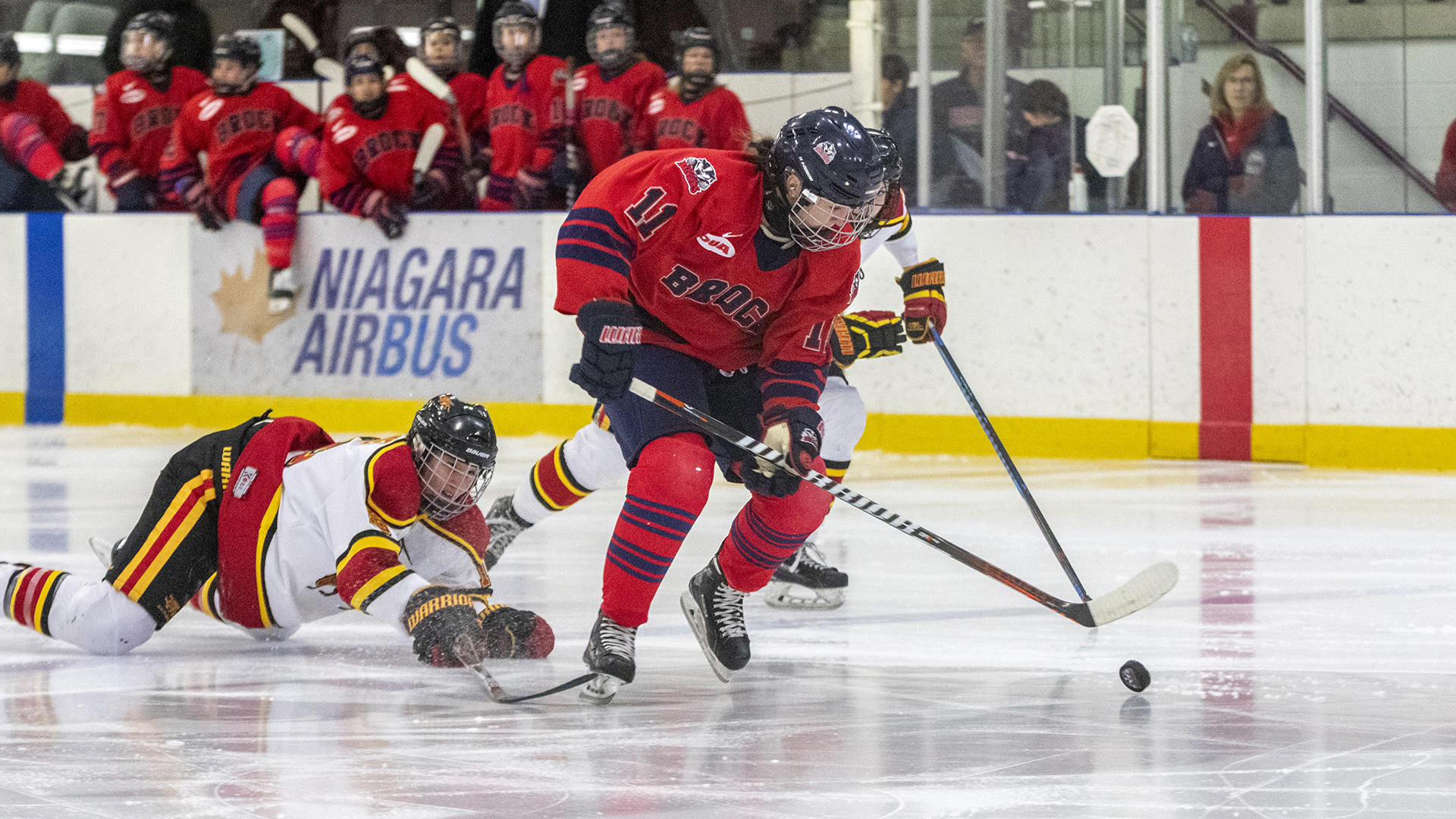 Haughey is a dual-sport varsity athlete at Brock. She plays rugby in the fall and hockey in the winter.

A member of the Brock women’s rugby and hockey teams, Haughey decided to try bobsleigh on a whim. She was identified as Olympic talent during an RBC Training Ground combine event held at Brock in 2018.

“I signed up for it just to see how I would rank against the other athletes who attended the combine,” said Haughey. “I didn’t think much of it until I got approached to go out and see what bobsleigh was like in that same year.”

Haughey was delayed in pursuing bobsleigh after breaking her ankle, but after a long and successful rehab, and the cancellation of university sports, there was nothing holding her back from going all in on a new sport.

Haughey flew to Calgary for a series of tests and tryouts, including a final evaluation in Whistler, BC, where she climbed into a bobsleigh for the first time.

“Getting into a bobsleigh was so amazing. The sport is like nothing I’ve ever experienced,” said Haughey. “I would describe it as a really crazy roller coaster with your eyes closed, because the brakeman’s head is down the whole time and we can’t see anything, but we feel everything,” 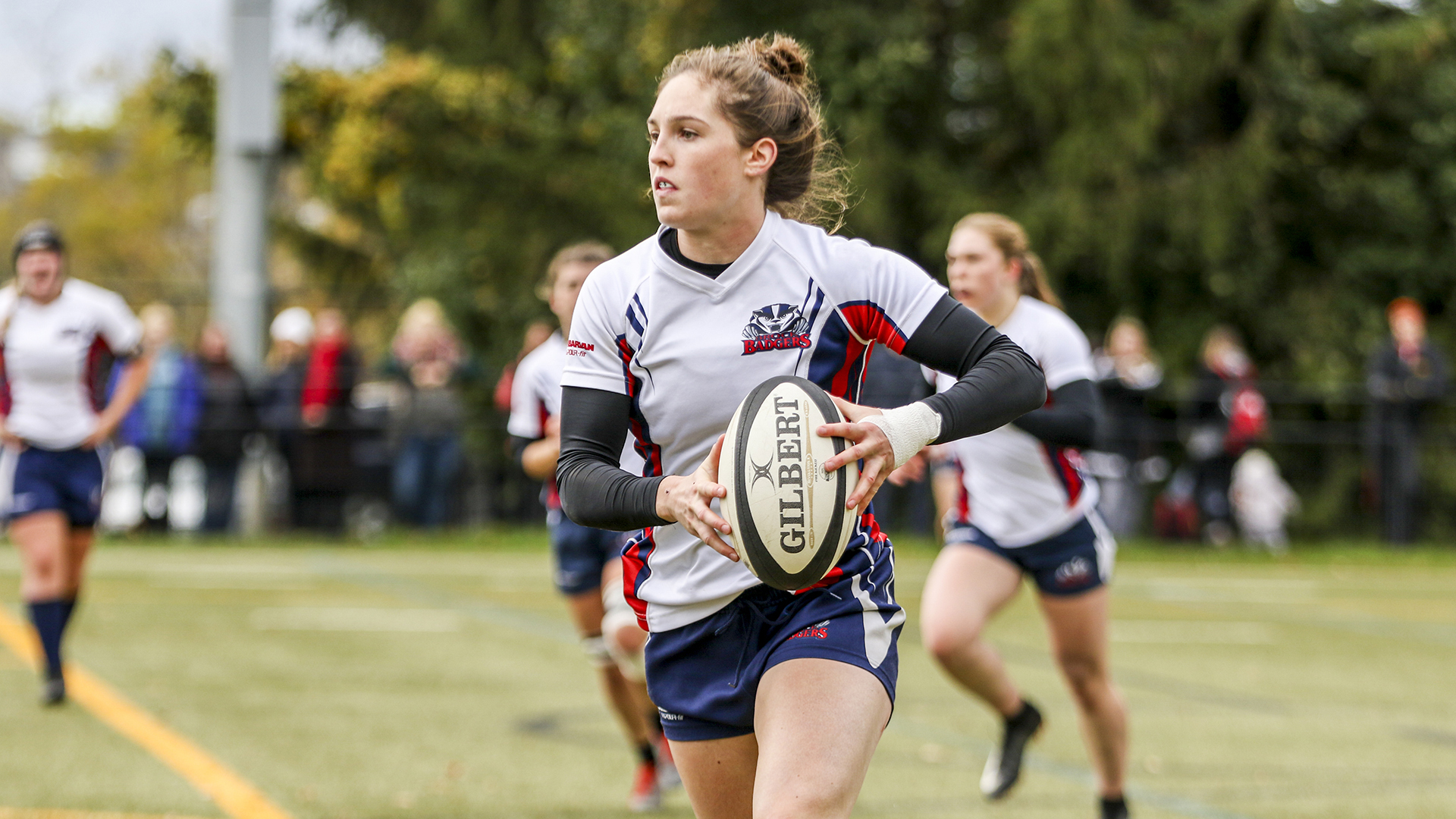 The role of a brakeman requires the brute force of a rugby player, yet the gracefulness and timing of a speedy hockey winger.

“We have to push the sled to get it moving in the beginning of the run, hop in and pull the brakes at end of the run,” said Haughey, who stands 5-foot-7. “Everything in between you pretty much just hold on and enjoy the ride.”

Haughey and members of the national team will spend the holidays training and competing around Europe for the next three months in preparation for the 2022 Winter Olympics in Beijing.

She will continue her studies at Brock through online courses.

In four seasons with the Brock women’s rugby team, Haughey has scored countless clutch tries, including eight tries in eight playoff games. She was named the OUA Rookie of the Year when she burst onto the university rugby scene in 2016, and was named to the All-Star team last year.

“Niamh has always had a great work rate and work ethic. She was well-respected by coaching staff and teammates alike,” said Smerdon. “I know she will do everything in her power to make that Olympic Bobsleigh team. Whatever the outcome, we are all proud of what she has already achieved and will be cheering her on.”

In two seasons with the women’s hockey team, Haughey scored five goals and each one came at a critical point in the game, either as the opener, short-handed or a game-winner.

According to Brock women’s hockey head coach Margot Page, Bobsleigh Canada Skeleton is lucky to have Haughey in their system.

“Niamh is one of the most well- rounded athletes I have seen. It is no surprise to me that she has excelled at yet another sport,” said Page. “She is extremely competitive, but has an amazing team-first attitude that makes her a coach’s dream at this level, and also loved by her teammates.”

Haughey credits the Brock Sports community for encouraging her to seek new opportunities through sport.

“I’m not sure I would have pursued this sport if both my rugby and hockey coaches, teammates, as well as Lead Sport Performance Coach Dave McDowell didn’t push me to try something new,” said Haughey. “They believed in me from the moment I said ‘bobsleigh.’ They encouraged me to go for it and see what comes of it, and I think that leap of faith paid off.”

This is the second time a member of a Brock rugby team has been named to Bobsleigh Canada Skeleton. David Greszczyszyn (BPhEd ’02) made the skeleton side of the national team in 2008 and represented Canada at the 2018 Olympic Winter Games in PyeongChang, South Korea.