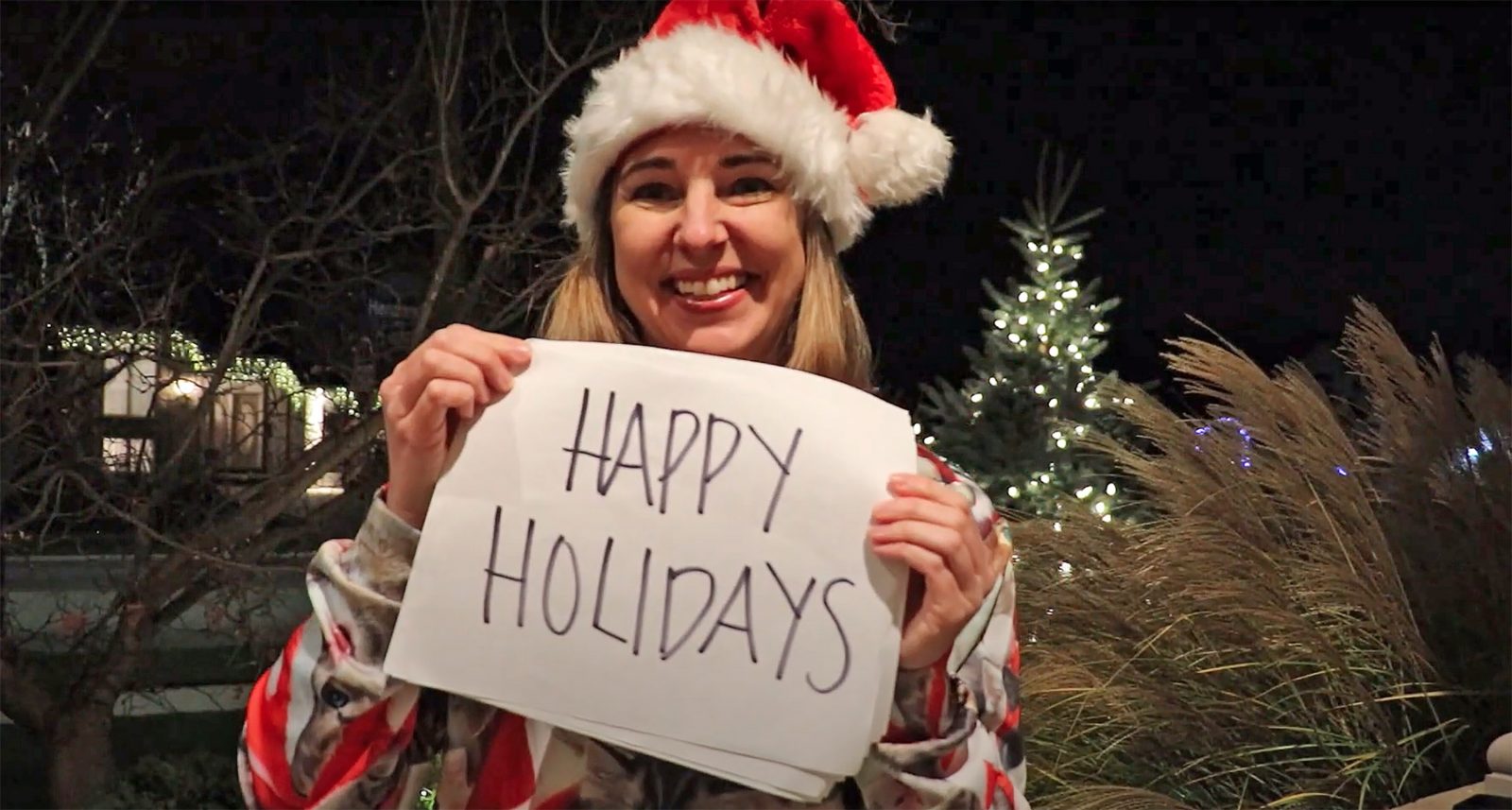 Brock Biological Sciences Assistant Professor Lori MacNeil made a video mashup to keep her students engaged in their online classes. Her remake of a famous Love Actually scene has now reached more than 1.2 million people.

Brock University Biological Sciences Assistant Professor Lori MacNeil prides herself on connecting with students and making them feel engaged in the classroom.

So, when the COVID-19 pandemic forced her third-year genetics course to go fully online, she wanted to make sure that connection didn’t get lost.

Since the start of the Fall Term, MacNeil has been making increasingly complex introductions to her weekly BIOL 3P51 lesson videos. They have ranged from a brief magic show from Arrested Development’s Gob Bluth to her starting the class with a ‘press conference’ in front of the Four Seasons (Total Landscaping).

But her most recent intro topped them all, with MacNeil recording a holiday-themed mashup video with clips from the famous doorstep scene in the movie Love Actually. MacNeil replaces the character Mark with herself, using paper signs to silently tell Juliet (played by Keira Knightly) about how she hopes they’ll be in a classroom together again soon … but how in the meantime, Juliet still has to watch one more lecture, and study for an upcoming exam.

For the past few weeks I’ve been making increasingly elaborate lecture intros to help drum up student excitement for new lecture content. I may have gotten a little carried away for the final week… #loveactually #BIOL3P51 #onlinelearning #brocku #edutwitter pic.twitter.com/0kjOLPnBn4

MacNeil said once she came up with the concept and recorded the video on her front porch, it took around five hours to edit the mashup.

Since being posted to Twitter Wednesday, Dec. 2, the video has been viewed more than 67,000 times and has received hundreds of retweets and comments. The original Tweet has now reached more than 1.2 million people.

“It’s just insane,” she said of the reaction online. “I think it resonated with people doing online teaching right now and struggling to make that connection, especially now as the holidays are approaching.”

More important than the number of views, however, is the reaction the intros garner from her students.

“It’s about trying to engage the students and get them excited about new lecture content,” said MacNeil, a professor at Brock since 2014. “The online system has a tendency to feel a little impersonal, with students watching slides on a computer while listening to a voiceover explain the content. When I am teaching in person, I often start class with music and funny memes or gifs to make the students laugh and feel comfortable in the classroom. I wanted to capture that same feeling in the virtual environment.”

The most recent video appeared at the start of the 12th and final lecture of the BIOL 3P51 genetics course, which MacNeil says is probably a good thing.

“I’m lucky because if I had to top myself again, I’d probably be off trying to make a feature film right now,” she said with a laugh. “When I first started doing it, I thought the students would find it funny and it would catch their attention; then I just kept trying to outdo myself.”

Originally from Halifax, MacNeil finds it important and rewarding to interact with her students — even if that has to happen through a computer screen.

“I think having them see me be a bit goofy and letting them see my personality gives the whole course experience a more personal feel,” said MacNeil, whose innovative and engagement-centred lessons earned her the Math and Science Council Excellence in Teaching and Student Engagement Award in 2016.

Third-year Medical Sciences student Noah James said his anticipation over what MacNeil comes up with has been growing each week.

“Dr. MacNeil has yet to fail in putting a smile across my face,” he said. “Not only are the introductions creative, but she has hit on so many contemporary pop culture references just adding to the overall quality. She has done an incredible job at keeping learning fun this semester while taking full advantage of the digital lessons.”