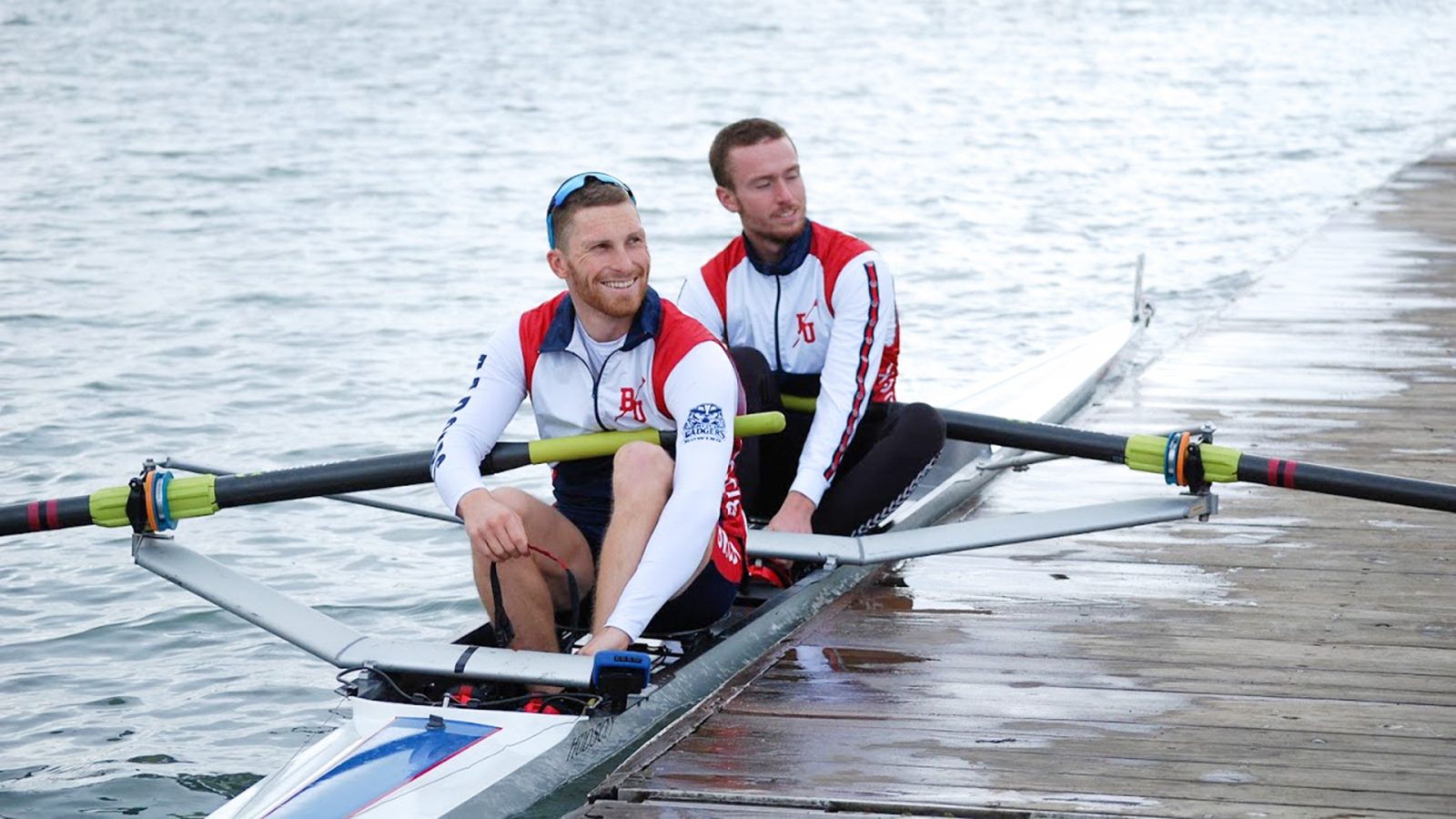 Wainfleet native Jacob Giesbrecht, front, rowed for the Brock Badgers while pursuing his master’s degree. He is pictured with teammate Kevin Keith.

A master’s degree from Brock University has taken a competitive rower to another part of the world.

During Brock’s Fall Convocation on Friday, Oct. 16, Jacob Giesbrecht of the Brock men’s rowing team officially graduated with a Master of Arts in Applied Health Sciences with a focus on Health and Physical Education.

He devoted his master’s work to exploring an important side of his sport: the ethical implications of having a weight category for Under-19 lightweight rowing in Canada.

“There are numerous issues that arise from having a weight-based category in which high school athletes often have to ‘cut weight’ in order to fit within a certain weight class,” said Giesbrecht. “I attempted to address those issues and better understand why a category should perhaps still be allowed from an ethical standpoint.”

The completion of his master’s degree has since taken him to Charles University in Prague, Czech Republic, where he is working on his PhD. Giesbrecht is currently researching the influence of social media and its effects on athlete autonomy and freedom of expression in sport.

“This kind of work is precisely what I’ve always been interested in,” he said. “It doesn’t necessarily relate to rowing, yet I am still able to pull a lot of experience and concepts from my master’s work.”

Giesbrecht added that his time as a student-athlete, which taught him about facing adversity, has been instrumental in his survival abroad. He is often surrounded by people who speak very little English and, due to the pandemic, he spends his days studying in quarantine, as some of his peers have contracted COVID-19.

“The challenges I’m facing here are not like anything I’ve ever faced,” said Geisbrecht, who has been studying in Prague since the end of September. “I have had to survive on my own with nothing but a small scholarship and some savings. My time as a student-athlete taught me to persevere when things aren’t going your way.”

His sports experience has pushed him to continue on and without it, he feels he would have given up on the situation by now.

“Culture shock is a real phenomenon, and the mental health tools I developed while at Brock and working with sport psychologist and Brock grad Matthew Marini (BA ’11, BSc ’13, MA ’16) has been the most important training I’ve ever done in my life,” he said. “These are lifelong skills that were nurtured in a relatively safe environment, and now, as they are being put to the test, I can confidently say being on the rowing team was the most important and educational experience I have ever had.”

Giesbrecht, who grew up in Wainfleet, said he’s been privileged to receive top-notch coaching throughout his rowing career. His high school coaches at E.L. Crossley in Pelham — John Ruscitti, Pat MacNally, Darcy Usborne and Kyle Nickle — taught him life lessons about resilience and fortitude that he will never forget.

“That kind of control and conviction has resonated in my life and often put me in the stroke seat well after high school,” said Giesbrecht.

Giesbrecht attended and rowed for the University of Toronto, where he secured a Bachelor of Science, and then earned a Palliative Care degree from Lakehead University. He wanted to keep rowing while pursuing his master’s and faced a choice between Brock and Western.

“I chose Brock for practical reasons and because Pete Somerwil is the head coach,” said Giesbrecht. “Pete is arguably the greatest head coach of any university rowing program in Canada, and I knew I would benefit from being under his wing in more ways than just winning races.

“Brock also has a brilliant mental health system. Their sport psychology helped me improve as a student and the performance programs took my physical training to another level.”

Somerwil said Giesbrecht played a large role on the team from Day 1, winning races on the water and serving as co-president of the Brock Rowing executive.

“Jacob was a leader right from the beginning. As a master’s student, he had the maturity and smarts, but as an athlete, he was extremely skilled and one of our top performers,” said Somerwil. “He ran the summer camps for kids,  a fundraiser for the team, and was an all-around contributor to the team.”

Giesbrecht also played a large role in the community by leading the Badgers’ partnership with the United Way after-school program for disadvantaged youths.

This program invites young, aspiring rowers to Brock’s Leo LeBlanc Rowing Centre and introduces them to the sport by teaching them how to properly use the rowing machines and the ‘tank’ rowing simulator.

The program culminates in a trip to Henley Island, so children can witness actual rowing on the water. Those who participate for more than a year have the opportunity to row in a boat with Brock’s varsity athletes.

It was Giesbrecht’s origins in the sport that inspired him to help with the program.

He started rowing in the summer of 2008 thanks to his twin sister, Emma, who chose to attend a learn-to-row program at the South Niagara Rowing Club (SNRC) in Welland.

“I hated it at first, but an older role model of mine who also rowed encouraged me to continue,” he said. “I stuck with it after my first full season and some positive feedback.”

His rowing career includes a boatload of medals and trophies, including representing Canada with the junior national development team and competing in the CanAmMex regatta.

However, there’s a particular Brock rowing victory that stands out as his favourite.

Giesbrecht won an Ontario University Athletics gold in the lightweight men’s pair alongside teammate Kevin Keith, who he coached during his days with the SNRC.

Winning that race meant the world to Giesbrecht. He said it felt like his success was doubled, because his coaching days didn’t scare Keith away from rowing.

“That race was particularly special because Kevin was in the first group of learn-to-row athletes that I ever coached,” said Giesbrecht. “He was four or five years younger than me, and I never thought I’d ever be racing in a pair, let alone winning races, with this little kid I coached nine years earlier. It was a fantastic race.”