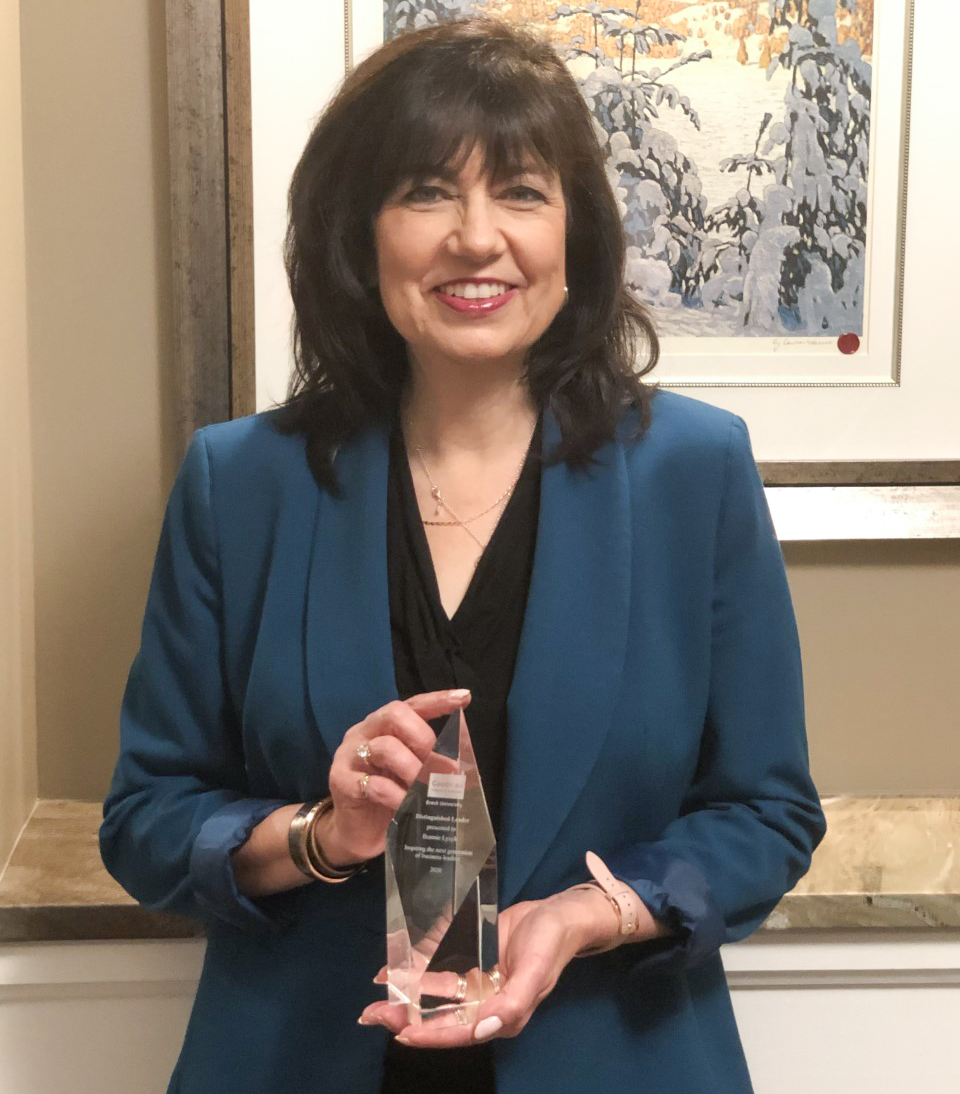 Bonnie Lysyk, Auditor General of Ontario, was recognized as the Goodman School of Business 2020 Distinguished Leader during a virtual fireside chat Monday, Oct. 19.

It’s a common question in job interviews: Where do you see yourself in five years?

If Bonnie Lysyk is doing the interview, however, she’ll never ask.

The Auditor General for Ontario and the Goodman School of Business 2020 Distinguished Leader is a big proponent of focusing on the here and now, not there and then. Patience, Lysyk said, is important.

“If you focus too much on that, it’s stressful and you put too much pressure on yourself to get somewhere,” she said. “If you work at something where you have passion and knowledge, you’ll get to where you want to be.”

That reassurance was among the many words of wisdom Lysyk, who also sits on the Dean’s Advisory Council for the Goodman School of Business, offered Brock students and staff during her virtual fireside chat with Goodman Dean Andrew Gaudes last week. The event was supported by the Willmot Foundation and is part of the D.G. Willmot Leader Series.

Lysyk answered questions from Gaudes about her career, which included time spent as the Provincial Auditor for Saskatchewan, and as Deputy Auditor General and Chief Operating Officer of Manitoba before that.

Through it all, Lysyk credited her success not just to hard work, but the people she’s met along the way who taught her to value everyone with whom she works and to not forget to have fun, no matter how serious the job.

Lysyk is the protégé of many mentors. And all of them, from the grade school teacher who told her she should go to university to her former boss at Manitoba Hydro who invited his staff to coffee each day, have shaped Lysyk, her career and how she leads the team today that keeps watch over the provincial government’s public accounts, she explained.

“You’re going to have many people who impact you, whether you call them a mentor or not,” Lysyk said.

Even the less stellar role models, including a former colleague who treated people poorly, served as an example to her, she explained. “I knew I didn’t want to do any of that in my career.”

In addition to discussing her own mentors, Lysyk got to spend some time mentoring Goodman student leaders during a virtual roundtable discussion that happened after the fireside chat.

Manpriya Arora, a Bachelor of Business Administration (BBA) Co-op student who also serves as the Business Students’ Association (BSA) Vice-President of Corporate Relations, was keen to hear Lysyk’s experience as a woman in business and how she overcame any biases as she climbed her career ladder.

It was Lysyk’s leadership style that made the most profound impression, however.

“What I took away most of all is she seems to have a lot of genuine respect for the people she worked with. It was refreshing to hear that from someone who’s leading,” Arora said. “Everyone has a different leadership style but working with a team, I realize that’s the style I more identify with. The type of leader I am, I never feel like I know more than anyone on my team.”

Fourth-year BBA student Axel Cruz Ceballos joined the virtual roundtable with Lysyk for a glimpse into life in the public sector. Cruz Ceballos, whose study focus is operations management, wants to keep his options open when he graduates.

While Cruz Ceballos, who hails from Mexico, was struck by Lysyk’s international work experience, it was her humility and determination that really resonated.

“It made me feel like I was talking to someone who has been in my shoes,” he said. “She’s been to school and struggled. It reminded me of what you can do when you put your mind to it.”