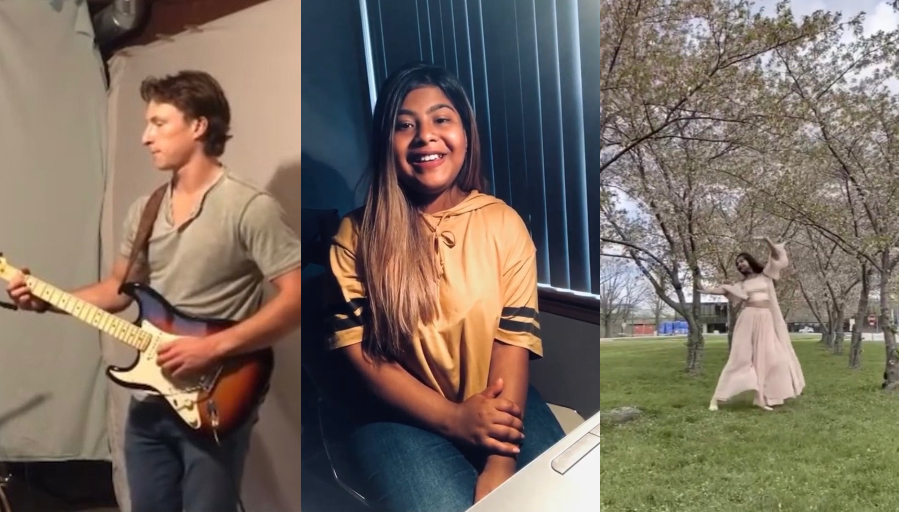 Alex Brooks-Potts from Burlington, Rani Hansalia from India and Sharifa Ahmed from Bangladesh were the top three finalists in the Brock’s Got Talent virtual competition.

The diversity could be felt in not only the variety of musical genres, but also through the students participating in the contest, with entries received from around the world. The event took place on the Brock International Instagram account, which asked students to share their talent. The top entries were put to popular vote from Sept. 14. to 17, with nearly 750 nominations cast over the four days.

In third place for her heartfelt rendition of Can’t Help Falling in Love, originally sung by Elvis Presley, was Sharifa Ahmed, a third-year Accounting student from Dhaka, Bangladesh.

“It reminds me of home,” said Ahmed of the song. “My parents and I would sing this song every time my younger brother randomly played the tune on his ukulele. It’s also my mother’s favourite.”

Ahmed used to sing jingles for advertisements as a child back home in Bangladesh but doesn’t sing professionally anymore. Now, she treats it as a hobby, singing in front of friends and family.

“With the situation that we are all in right now, I just wanted to put some light out there,” she said. “Something we can all have fun watching and bond over virtually.”

In second place for her Bollywood style dance in front of Schmon Tower was Rani Hansalia, a second-year Media and Communications student from India.

Hansalia, who has more than 15 years’ experience in dance forms such as Indian classical, contemporary and Bollywood, performed a routine from the song Kabira Encore featured in the movie Ye Jawani Hai Deewani.

“Dance has always been close to me,” she said. “The stage is where I express myself. People use diaries about how they feel just to put down their thoughts, but my dance floor has been my diary.”

Hansalia, who is studying online this year from her home in India, decided to enter the contest to be more connected to the University community.

“This was my best chance at feeling like I was right there, even though I wasn’t,” said Hansalia.

In first place for his rendition of Sweet Home Alabama by Lynyrd Skynyrd was Alex Brooks-Potts, a fifth-year Business Administration co-op student from Burlington.

“I’ve been playing guitar for around 10 years now,” said Brooks-Potts. “It’s really more of a hobby, but my brother and I have recorded songs throughout our time playing together.”

It was the first time Brooks-Potts participated in a virtual talent competition, and he encourages other students to participate in future ones if they get the opportunity.

“It was nice to see such a diverse group of contestants with many different talents,” said Brooks-Potts. “I think online contests like this are a great way to interact with students given the situation we’re all facing.”

The top three finalists were rewarded with $75, $50 and $25 gift cards to Skip the Dishes, but their experience from participating was invaluable.

“The sportsmanship among all the participants was amazing,” said Ahmed. “We were all voting for and congratulating each other, reaching out to each other privately just to show appreciation.”

Brock International Services has intentions to bring back the virtual competition later this semester, with details to be announced on their Instagram account.