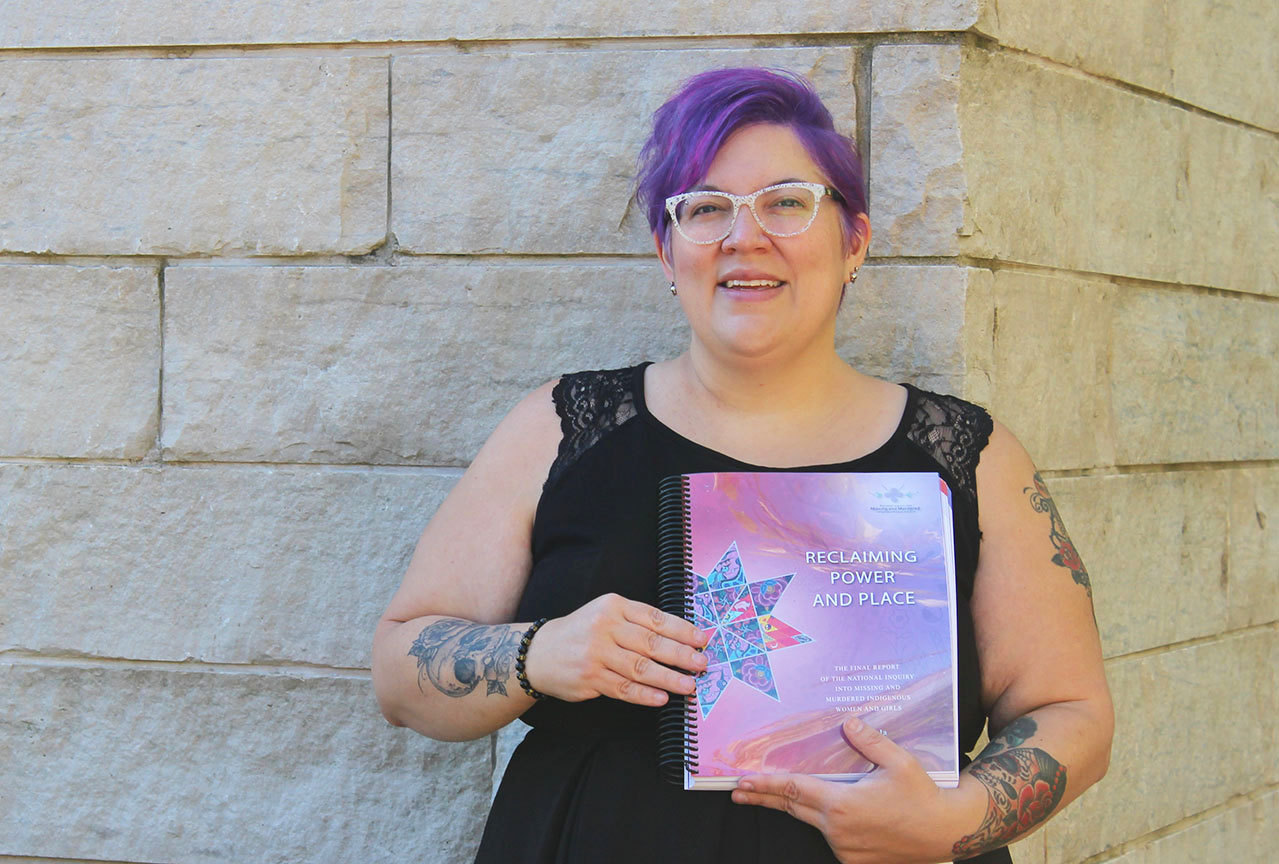 Robyn Bourgeois, Associate Professor in the Centre for Women’s and Gender Studies, is inviting the Brock University and local community to an information session on the Decolonial Reading Circle (DRC) Tuesday, Sept. 29.

More than a year after the final report of the National Inquiry into Missing and Murdered Indigenous Women and Girls (MMIWG) was released in June 2019, not one of its 231 Calls for Justice has been implemented.

According to Robyn Bourgeois, Associate Professor in the Centre for Women’s and Gender Studies and the driving force behind the Decolonial Reading Circle (DRC) at Brock University, this makes the DRC even more important.

“We need to make sure this report doesn’t sit on a shelf,” asserts Bourgeois, who first formed the DRC last fall to allow members of the Brock community to engage with the Inquiry’s final report. “The lives of Indigenous women and girls are worth more than this.”

To this end, the DRC will expand into two circles this year. One will address the final report of the Inquiry, as it did last year. A second circle, which will be hosted in conjunction with the Centre for Pedagogical Innovation, will examine decolonial readings by Indigenous writers.

Both circles will be held online starting in the fall due to the ongoing pandemic.

“I’m actually excited about moving to virtual circles,” says Bourgeois. “I’m hoping it may make the DRC more accessible to people, especially those in the community. It’s a way to bring us together and stay engaged while we remain safe.”

Bourgeois also says she hopes that instructors who are now busily putting together their courses for next year “might see the DRC as a meaningful activity for their students and encourage participation.”

Thanks to funding from the Dean’s Discretionary Fund in the Faculty of Social Sciences, the DRC has a budget for co-facilitators and other guest speakers to support and join the discussions this year. Holding events virtually may also allow visitors from a greater distance to participate.

Reflecting on last year’s DRC experience, Bourgeois says she is very grateful to everyone involved, especially Michelle Mudge of the Student Justice Centre, and that she was pleased with both the interest and the results.

“Despite ending abruptly due to the pandemic, last year’s DRC was an extraordinary experience,” says Bourgeois. “I honestly went into this doubting that people would be interested and yet, after the first info sessions, I had more than 90 people signed up to be involved.”

The meetings were planned to take place from September to April. When the provincial shutdown first prohibited large meetings, Bourgeois at first thought the suspension might be temporary.

“I originally sent out an optimistic email that we would just pause meeting and would pick up shortly, never imagining the scope and severity of this pandemic,” says Bourgeois. “So the pandemic actually circumvented what I feel was the most important of the DRC — a final session where we started working through the calls for justice and developing an action plan for Brock.”

Reaching this step will be a priority this year, as will discussions of how the decolonization of Canada relates to the anti-racist activism that has grown so urgent in 2020.

“I hope the DRC can become a space where we talk about the events of this spring and help people better understand why Indigenous and Black folks have had enough and are demanding meaningful change,” she says.

In the circle devoted to the Final Report of the MMIWG Inquiry, participants will begin their reading of the report anew, but Bourgeois encourages those who have already participated to consider joining again.

“The conversations will be slightly different this year as I welcome a new co-facilitator, Fallon Farinacci, who is Métis from Manitoba but currently lives in the Niagara region,” says Bourgeois. “She was a member of the Family Advisory Council that helped direct the National Inquiry into MMIWG, and after she attended the DRC last year and her contributions to discussion were so impactful, I just knew we needed to collaborate on facilitating the next cycle.”

The second circle is inspired by a course Bourgeois taught last year in the Master’s in Social Justice and Equity Studies program entitled “Indigenous Resurgence and Decolonizing Canada.” It is her hope that people participating in this circle will be able to identify texts by Indigenous authors that they would like to read and discuss.

“The DRC is a great way for folks to explore decolonization through an Indigenous lens and a safer/braver space where hard discussions can be had,” says Bourgeois. “It’s also a great way to connect with our folks committed to driving forward Brock’s strategic commitment to decolonization.”