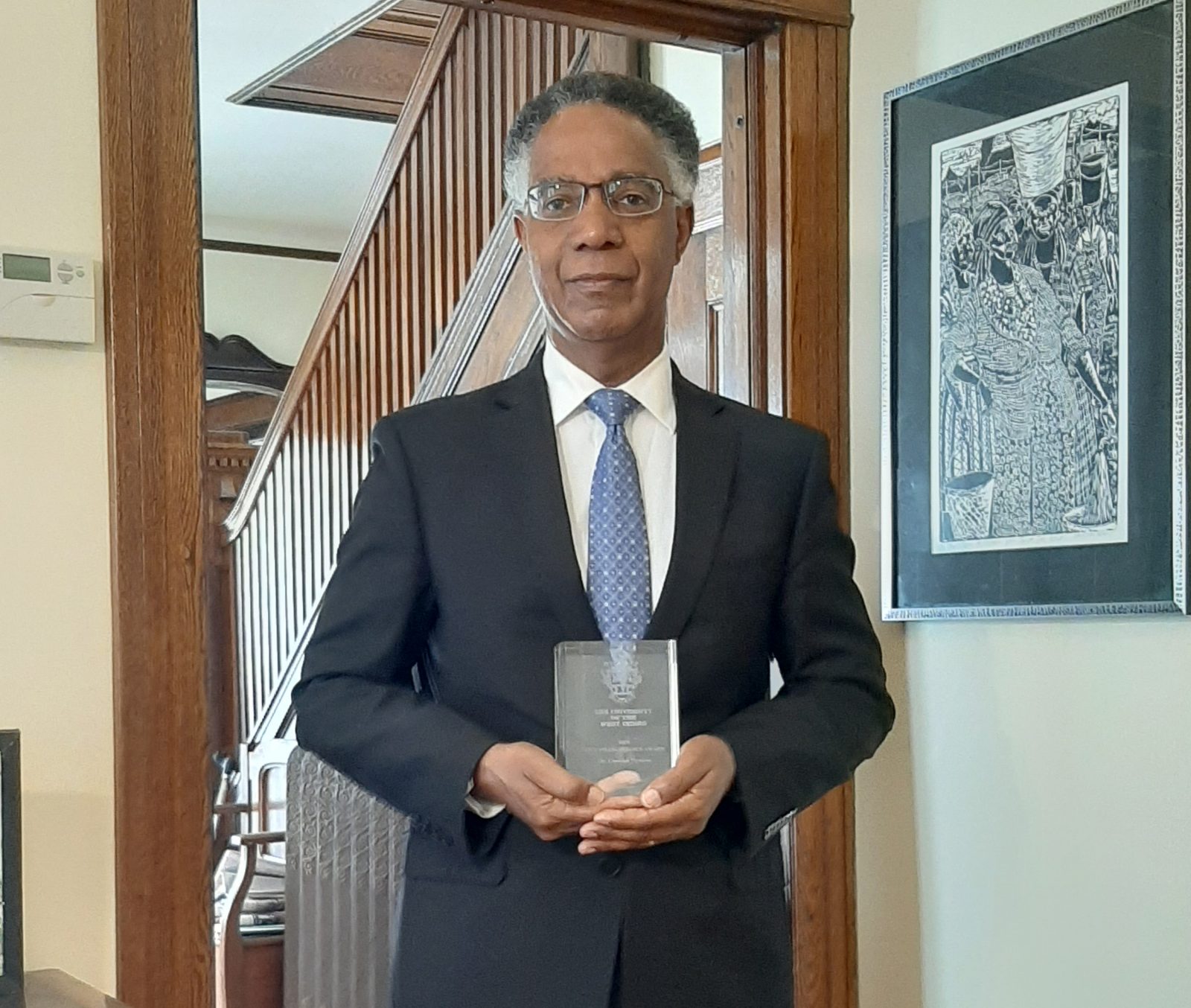 Brock University President Gervan Fearon holds his award for receiving the University of West Indies (UWI) 2020 Vice-Chancellor’s Award. Due to COVID-19 restrictions, the award was shipped to him and the celebration was held virtually.

The 11th annual University of the West Indies Toronto Benefit Gala was originally to be held in early April, but was instead postponed and held virtually on Saturday, June 13 due to the COVID-19 pandemic. During his remarks, Fearon recognized and thanked his wife, Kathy Moscou, along with his brother Alwin Fearon and sisters Marlene and Moreen.

“I am honoured to be the recipient of the University of the West Indies Chancellor’s Award,” says Fearon, who was born in England to Jamaican parents and grew up in Canada. “It is presented to individuals of Canadian-Caribbean heritage who have made significant contributions in their field. It is outstanding to be recognized for working at my passion – supporting post-secondary educational opportunity for students and the next generation of leaders. I hope my achievements will serve as an inspiration to others and they will see my achievements as their own possibilities.”

During its 11-year history, the Gala has awarded hundreds of scholarships to students in need throughout the 17 countries of the Caribbean and unites its attendees in “fellowship and promise, sharing and celebration, as we stand up to ensure a great future for the next generation and honour those on whose shoulders they stand.”

“It is the University of the West Indies’ distinct pleasure to honour Dr. Fearon for his numerous and outstanding achievements and philanthropic endeavours,” said Elizabeth Buchanan-Hind, Executive Director, Office of the Vice-Chancellor, UWI. “We are looking forward to a long and fruitful partnership with Brock University through the Canada-Caribbean Institute.”

Earlier this year, officials from Brock, including Fearon, and the University of the West Indies celebrated the formal launch of the Canada-Caribbean Institute (CCI) in Kingston, Jamaica, which will support studies and research into specific Canada/Caribbean issues.

“The formation of the Canada-Caribbean Institute established by Brock University and the University of the West Indies creates a framework to researchers to conduct joint projects; establish partnership; and educational experiential and academic exchange programs of students, faculty and staff,” says Fearon. “At Brock, our environment and sustainability research provide opportunities for the UWI while the tropical disease research conducted by the UWI provides opportunities for Brock. In other words, both institutes benefit and CCI will allow other institutions in the Caribbean and Canada to become members.

The CCI provides a framework for scholars in both Canada and the Caribbean to conduct research and scholarly activities in an effort to generate needed knowledge and analysis to inform innovative policy and initiatives for further enhancing relations between the two areas.

“Canada and the Caribbean has a long history,” says Fearon. “For instance, Sir Isaac Brock served in the Barbados and Jamaica prior to coming to Canada and becoming distinguished in the War of 1812. Today, the trade and foreign policy relationship between Canada and the Caribbean are important to both parties as well as to Canada’s prominence on the world stage such as was shown when Canada hosted the Pan American Games as well as Canada’s competitiveness in financial services.”

The Institute facilitates collaborative academic and research initiatives; faculty, student and staff exchange programs; and institutional capacity building in areas of shared interest between Canada and the Caribbean such as socio-economic development, environmental and health promotion, gender studies and trade and economic policy.

Fearon was a leading advocate behind the initiative and is personally contributing to funding the Dr. Gervan Fearon Scholarships, which will be awarded annually, beginning September 2020, to graduate students studying Canadian Caribbean issues at Brock. The scholarships will be awarded to a student or students from Canada one year and a student from the Caribbean in the alternating year.

Headquartered in Jamaica, the University of the West Indies also has campuses in Barbados, Trinidad and Tobago, and Antigua and Barbuda, as well as a virtual open campus that provides academic programming in 17 countries across the Caribbean.