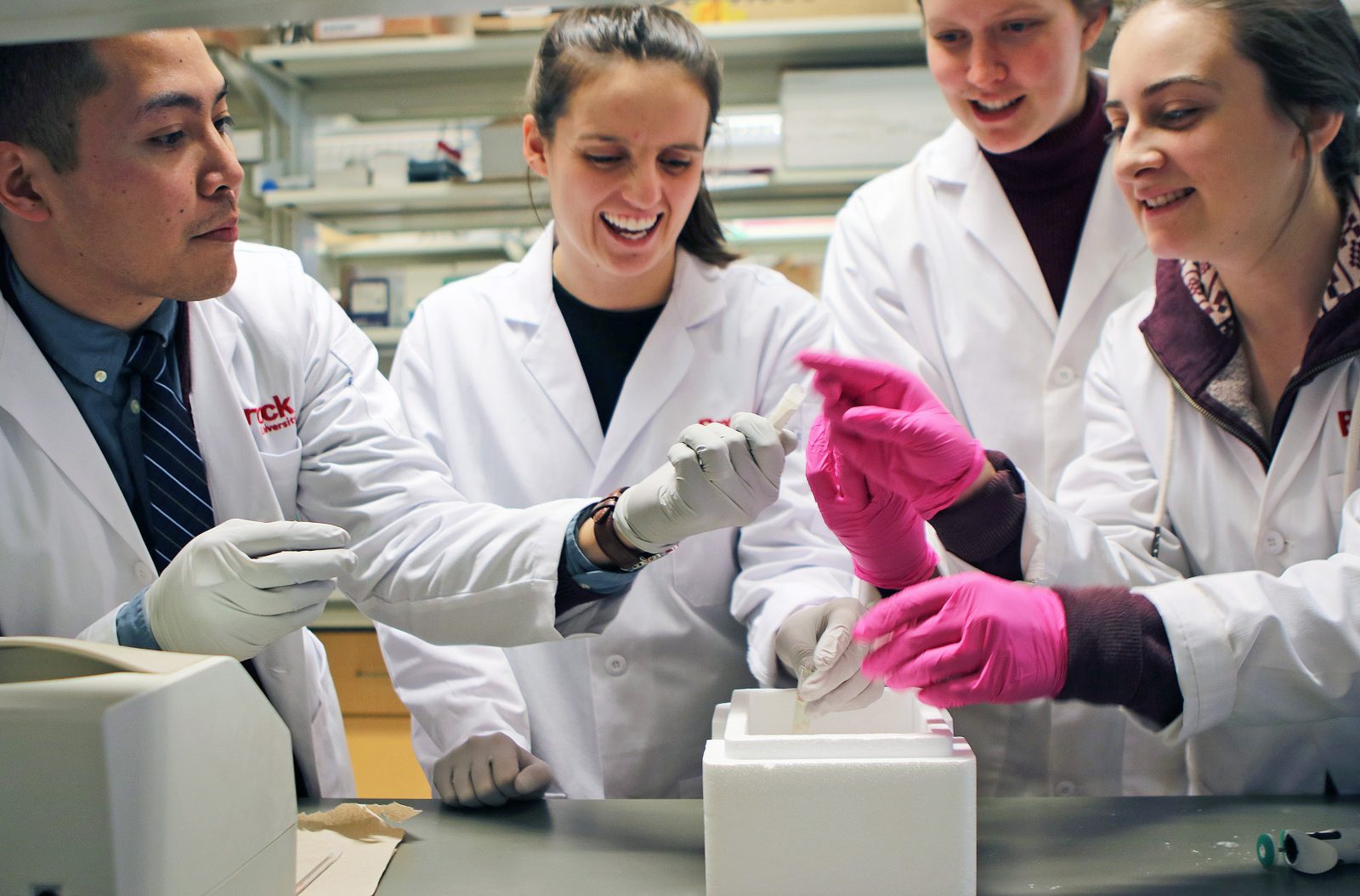 A research team headed by Assistant Professor of Kinesiology Val Fajardo is studying tissue samples from mice who spent time on the International Space Station. Pictured from left are Fajardo and master’s students Kennedy Whitley, Sophie Hamstra and Jessica Braun.

The legendary agency that put a man on the moon is helping a Brock University-led research team explore secrets of human health — including how to slow the kind of tissue loss that happens to astronauts during space flight.

The team, headed by Assistant Professor of Kinesiology Val Fajardo, was selected for a NASA research program whose work includes studying tissue samples from mice that have spent some time on the International Space Station.

The research, which got started in January and will continue in full once the COVID-19 restrictions on research are lifted, got some major attention Tuesday when it was picked up by the Globe and Mail. 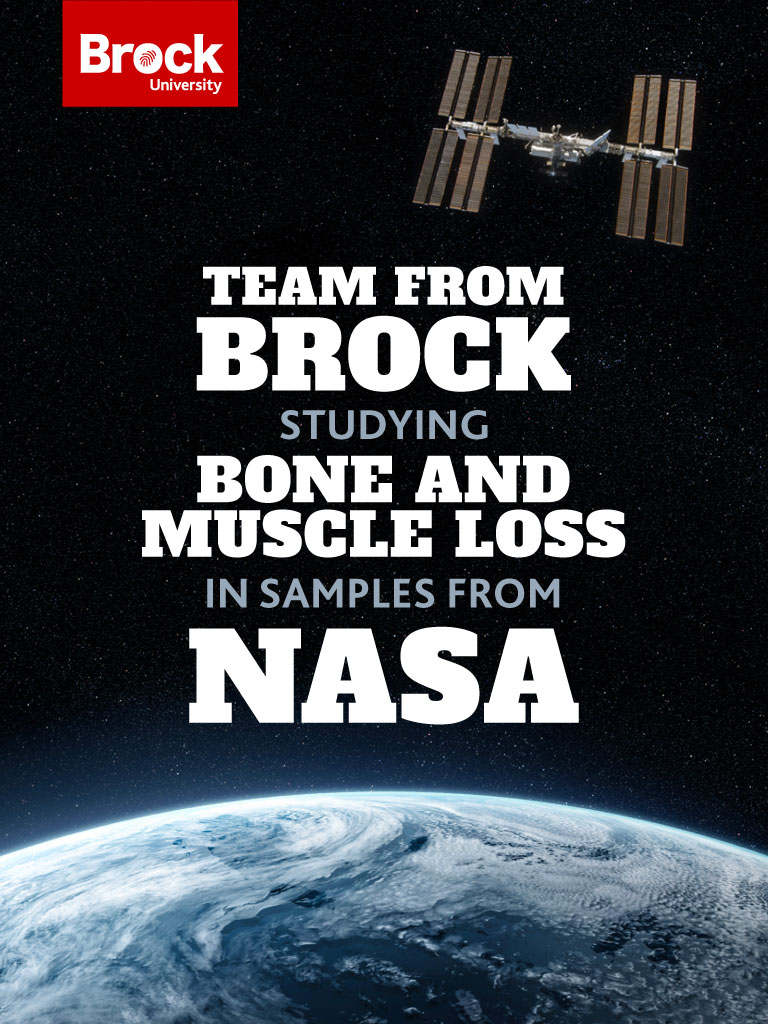 In examining muscle and bone loss in the ‘space mice,’ the scientists are hoping to unlock strategies for slowing bone and muscle loss in aging humans.

“This space model is widely considered to be an accelerated aging model,” says Fajardo. “You can study aging more efficiently because it takes a shorter amount of time to age. Mice already age at a quicker rate than humans, even more so in space.

“If you can figure out ways to stop or slow down muscle and bone loss in space, why not apply that here on Earth for aging or other diseases?”

As they spend time in space, rodents and humans lose skeletal density at a much faster rate than we do on Earth.

To develop and maintain the musculoskeletal system, muscles and bones must undergo stress, which is why regular exercise benefits our muscles, bones and health overall.

In space, the reduced gravity removes stress provided by the downward pull of gravity. This results in muscles and bones not being used as much, quickly leading to deterioration or atrophy.

Brock PhD student Holt Messner is examining an enzyme called GSK3, which is involved in a cell’s metabolism, differentiation and immunity. GSK3 activity is associated with muscle and bone deterioration.

He and master’s student Kennedy Whitley will compare GSK3 levels in the space mice samples with those of samples from two groups of mice on Earth, one group being housed in cages resembling those on space ships and another group kept in typical laboratory cages.

“We’re looking for ways to lessen microgravity-induced muscle atrophy by modifying the presence and/or activity of GSK3,” says Messner.

Collectively, their work will determine how a muscle’s ability to regulate calcium — the signal for muscle contraction — is altered after spaceflight.

“Now that the samples have been awarded to our team, it is important that we maximize our efforts in order to learn all we can from these rare muscle samples,” says Fajardo, who acquired the samples through funding from the Office of the Vice-President, Research.

There is also loss of bone density in space for the same ‘use it or lose it’ reason as for muscles: a lack of gravity means that bones don’t need to support the body.

The Canadian Space Agency says astronauts lose on average one to two per cent of their bone mineral density every month.

In addition to muscle atrophy, GSK3 may also harm bone health by triggering processes leading to bone deterioration. When GSK3 is inhibited, this may turn on processes that favour bone formation.

“It is possible that GSK3 may be contributing to the bone loss observed with spaceflight,” says Wendy Ward, Canada Research Chair in Bone and Muscle Development.

Ward and her team are examining GSK3 signalling in bone samples from space and will analyze the quality of the bone to provide insight into the risk of fracture.

“More fully understanding how bone loss occurs in terms of changes in GSK3 may benefit Canadians, as one in three women and one in five men will experience a fracture during their lifetime due to osteoporosis,” says the Kinesiology Professor.

Also on the team is Assistant Professor of Health Sciences Rebecca MacPherson, who will be examining how neurons in the brain deteriorate with age and what role GSK3 content and activity might play. Her research will help to describe the effects of space flight and radiation exposure to brain health.

Researcher Fabrice Bertile from Laboratoire de Spectrométrie de Masse Bio-Organique in France sent the team muscle samples from mice that spent one month in space in the BION-M1 biosatellite.

Fajardo says he is excited about the application of the team’s research results not only to the baby boomer population, but also to astronauts and, in the far future, to those traveling to Mars. 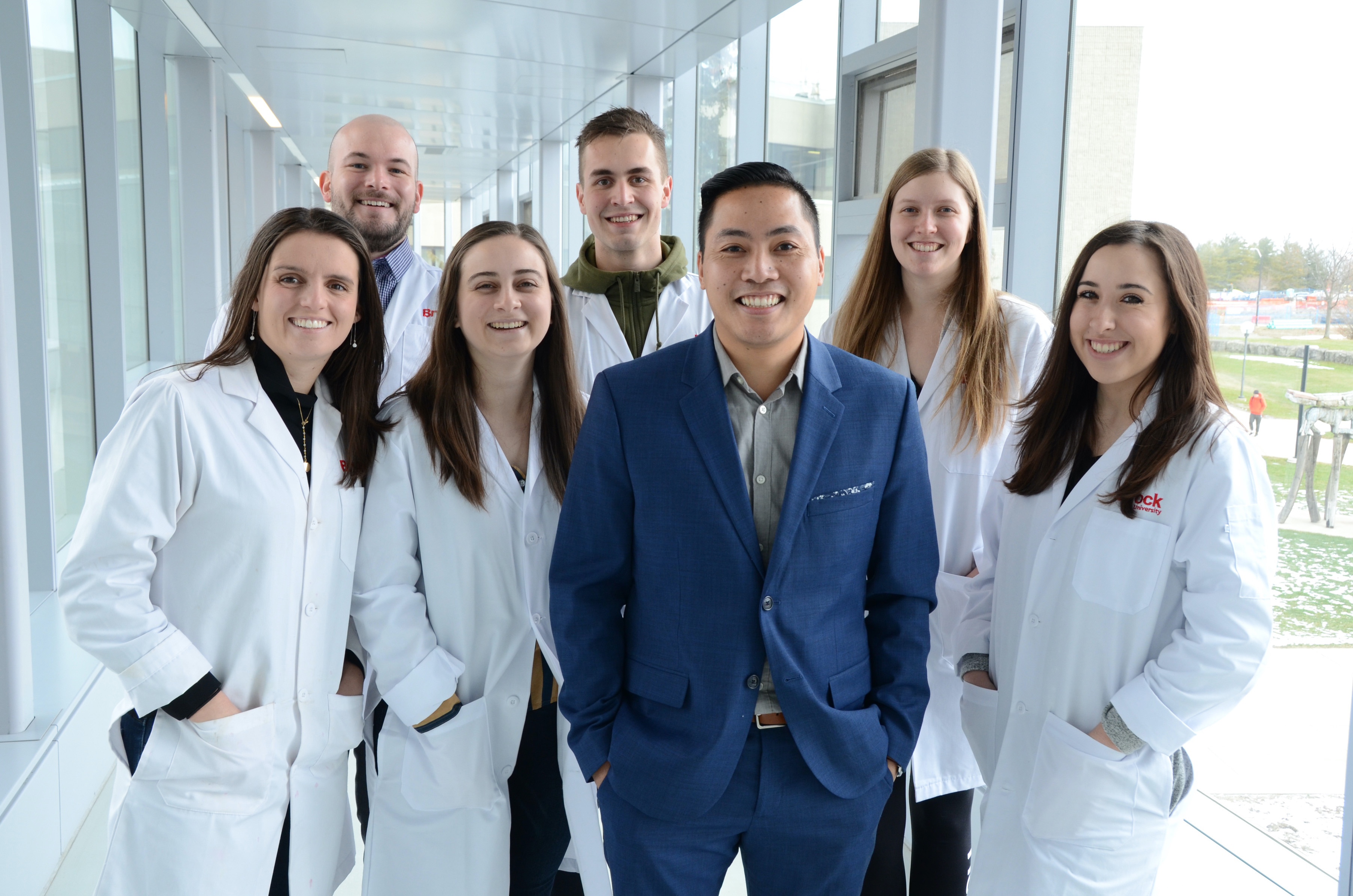