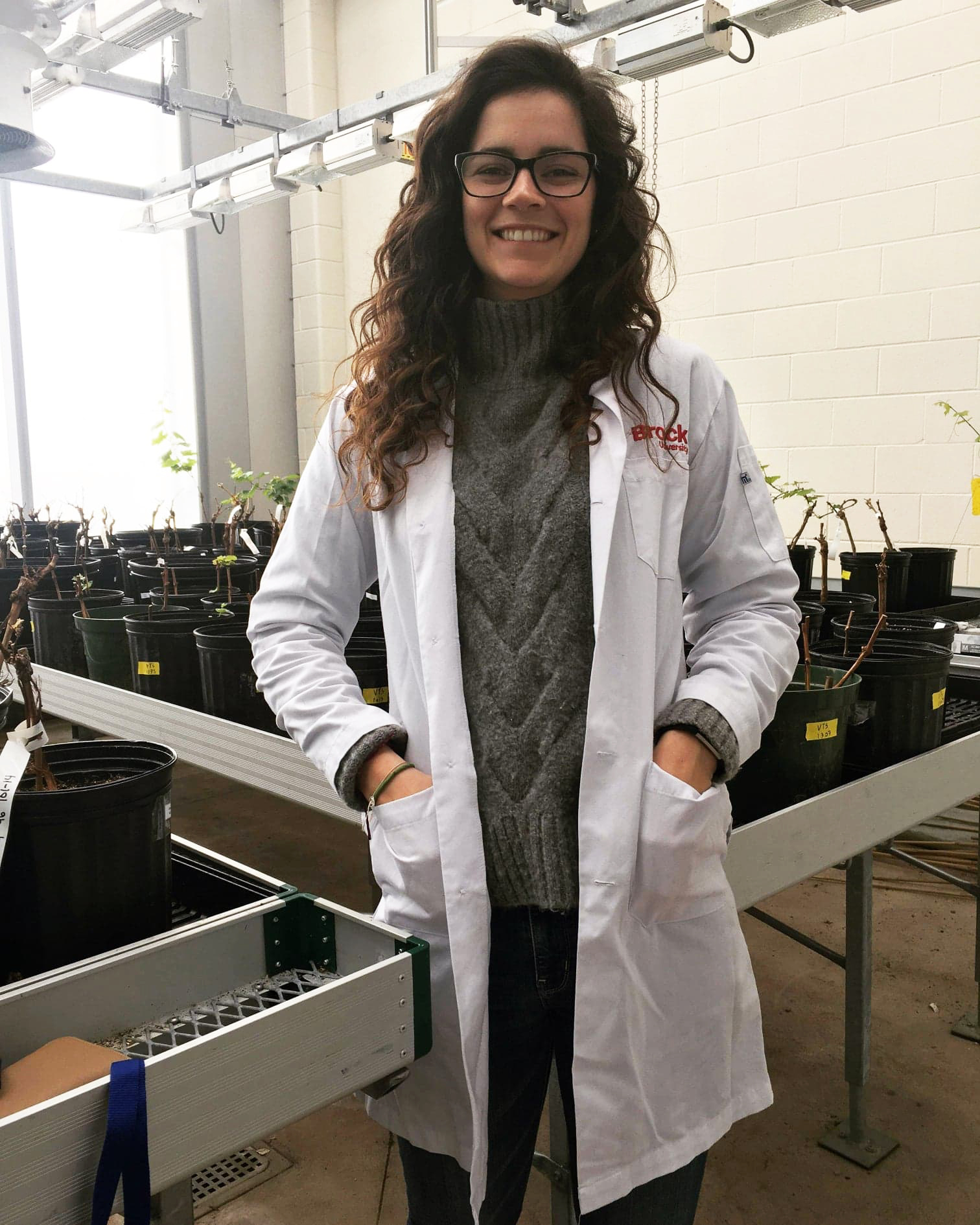 Margaret Hughes, a master's student in Biology, is studying ways to make food production more sustainable. She recently won this year's annual 3 Minute Thesis competition at Brock, and will virtually represent the University at the upcoming provincial competition.

Not even a global pandemic or a photobombing from her cat could distract Margaret Hughes from sharing her research story in this years’ Three Minute Thesis (3MT) Challenge. Hughes was declared the winner of the annual Brock University competition on Monday, April 13.

The 3MT Challenge originated in Queensland, Australia in 2008 as a way for students to explain their research to a broad audience in plain, accessible terms. Presenters have just three minutes and a single slide image to summarize their research.

Now in its eighth year at Brock, the 3MT Challenge had to adapt to the restrictions put in place as the University follows physical distancing protocol. Originally, the competition was set to take place in late March with an in-person event. When that event was cancelled, several participants showed interest in finding a way to continue the competition. A video competition was agreed upon, and participants were asked to film themselves doing their 3MT and submit it for judging.

Hughes, a master’s student in Biology, is studying ways to make food production more sustainable. Her research looks at using perimeter plantings around farm fields to increase populations of beneficial invertebrates, such as spiders, which helps to reduce the number of pest species in a crop and results in less need for pesticides.

Hughes adapted well to the new idea of a video competition and set up her presentation in her living room. Her cat, Meeko, even made a cameo.

“The biggest challenges of adapting my presentation to the conditions presented by COVID-19 are having the resources needed to make an effective presentation, as well as the additional distractions of being at home,” says Hughes. “As students, we are extremely lucky to be supported and provided with the tools we need to succeed, and we often take that for granted.”

Hughes was ecstatic to be picked as the winner of the competition.

“Participating and winning 3MT is a huge honour and super exciting,” she says. “Public speaking is always scary, but important. A huge aspect of research is making the findings accessible to the public in a way that is easy to understand and interesting. As researchers we have to be passionate about our fields, and we often forget how to translate this passion to people outside of our discipline.”

A panel of three judges from around Brock evaluated the presentations.

“I attended last year’s in-person 3MT event and was very impressed by the caliber of contestants and the depth and breadth of the graduate research they showcased, so I was very honoured to be a judge this year,” says Elizabeth Yates, Liaison and Scholarly Communication Librarian.

“While the pandemic constrained the 2020 competition, we had excellent candidates who presented engaging, concise and intriguing overviews of their research projects,” she says. “Selecting a first-place winner was a difficult decision, especially considering the students were coping with new technology, a very different 3MT environment and of course adjusting to life during a pandemic.”

Yates added that both Hughes and Torabi are “shining examples” of the impactful research done by graduate students at Brock.

“Margaret’s work will have local and global ramifications on farm productivity and food insecurity, while Venus’ research has the potential to curb the indoctrination of future terrorists by ISIS,” says Yates. “We are very fortunate at Brock to have such noteworthy emerging researchers dedicated to benefiting the world with their scholarship.”

Interim Dean of Graduate Studies Diane Dupont was pleased that the goals of 3MT could advance despite the challenges posed by physical distancing.

“The willingness of our student competitors to participate in less than ideal circumstances is inspiring,” says Dupont. “For any graduate student doing research, I believe two key assets are: be adaptable and be resilient because they are many ways to achieve ultimate objectives. Our 3MT competitors illustrate in spades their mastery of these assets. I hope that all students recognize the importance of facing current challenges by identifying areas of professional development that can be pursued remotely or through online opportunities.”

Hughes will move on to represent Brock virtually at the provincial 3MT competition later this month.