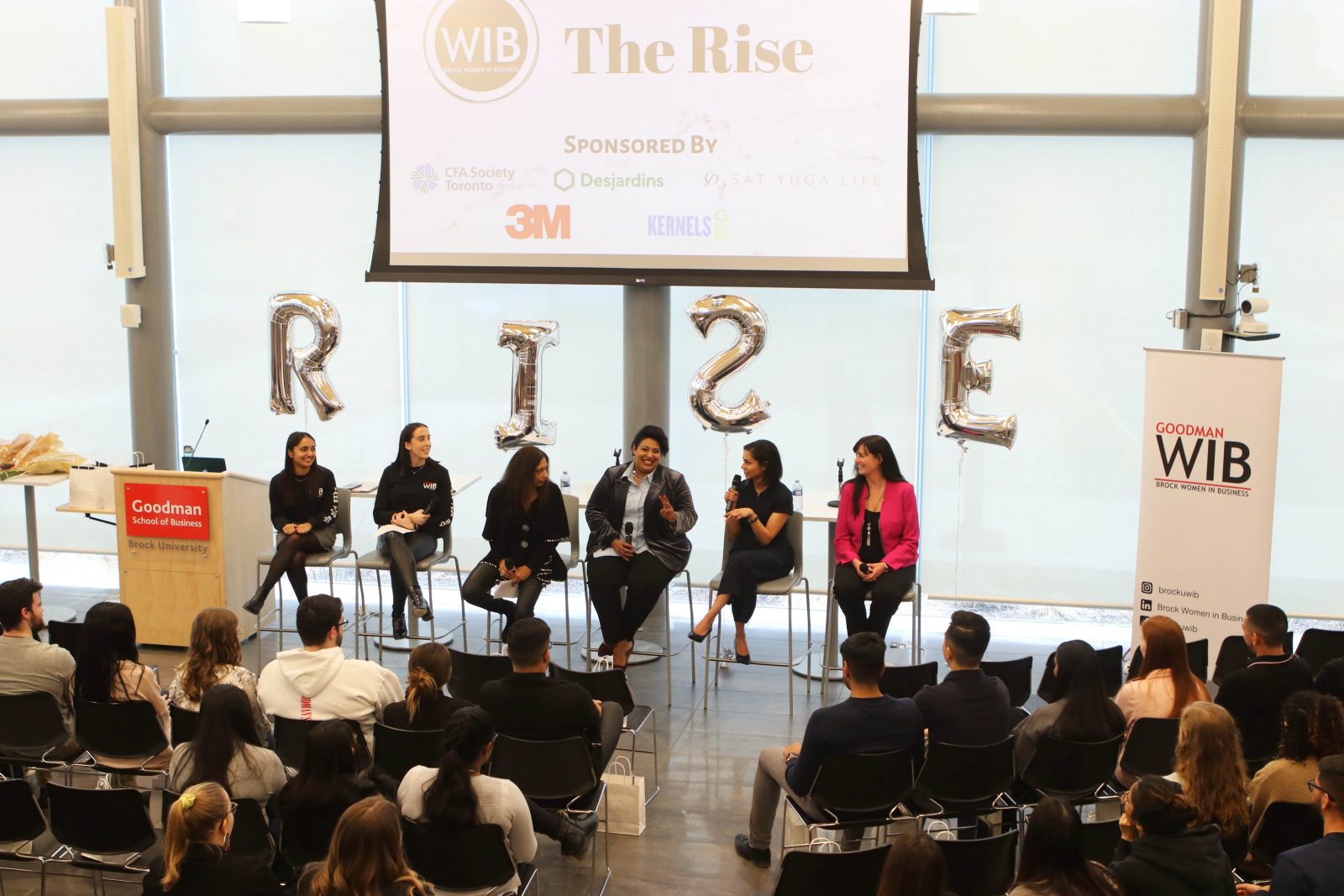 Work-life balance, adapting to change and following your passions were some of the topics discussed at an event held at Brock University last week in recognition of International Women’s Day.

Hosted by the Brock Women in Business student group in the Goodman School of Business on Wednesday, March 4, the second annual The Rise event was an opportunity for students to meet female business leaders with diverse experiences and industries, as well as hear first-hand how they’ve risen to the challenge of being in a male-dominated business world.

“Balance is the key to life,” said Seema Iyer, Founder and Owner of Sat Yuga Life, who was one of four panelists who spoke to an audience of more than 75 attendees.

Iyer shared her experience working in a career in finance for five years while simultaneously pursuing her own small business.

“It’s not about working hard; it’s about working smarter to balance your mind, body and spirit,” she said. “Let your intuition be your guiding light.”

Echoing Iyer was Karen Thompson, IT Team Lead, BI and Analytics Canada at John Deere Canada ULC. She attested to the desire and need to follow one’s passions.

“It’s never too late to follow your dream — and in doing so, you become more fulfilled,” she said. “Saying no to others is often saying yes to yourself. Plus, it often creates an opportunity for someone to step up.”

In following passions, Thompson also recommended women stretch out of their comfort zones and figure out what value they can bring to the table.

“Make yourself heard,” she said. “Do things to get your name out there. Challenge yourself, volunteer and be strategic to get face time. Be the go-to person and problem solver. When the time comes for the job you want, apply, even if you don’t have 100 per cent of the qualifications.”

Kiran Prashad, Executive Vice-President of DAG Group, shared how she set visionary goals for herself to climb the ranks. Over the span of more than 30 years with the same company, Prashad held 15 different roles and progressed from an account co-ordinator to vice-president.

“I hustled,” she said. “At times, it was incredibly hard for me to build a career and raise two kids at the same time. But now I run the largest revenue-generating and client relationship office in New York City and am financially independent.”

Another key point Prashad made was the ability to be adaptable.

“Change is the status quo,” she said. “You need to be flexible and open to feedback.”

“I’ve lost five potential client jobs because of the gender challenge,” said Crystal D’Cunha, CEO of The Insider View Inc. “I often say you have to fail fast, forward and famously so you can learn from the challenges and make adjustments.”

Prior to the panel discussion, more than 20 student leaders participated in small, informal discussion groups with one of the four panelists.

“Many students don’t know what to expect when they enter the business world, so the event was a nice stepping stone to ask questions and learn from experienced female business professionals,” said Shania Walden, fourth-year Business Administration student and President of Brock Women in Business. “The workshops offered more intimate conversation, independent questions and deeper insight to the overarching questions that were asked in the larger panel space.”

Fifth-year Business Administration student Daniela Gatti was one of the students who joined the workshops. She heard from Thompson, who spoke about the importance of data in making long-term projects and future decisions, no matter the industry.

“Karen made using spreadsheets look pretty cool, plus she related the conversation back to the roles student leaders take on,” said Gatti. “Our student leadership roles let us experience business wins or fails with low stakes.”