Is your child a picky eater? Brock researchers could use your help 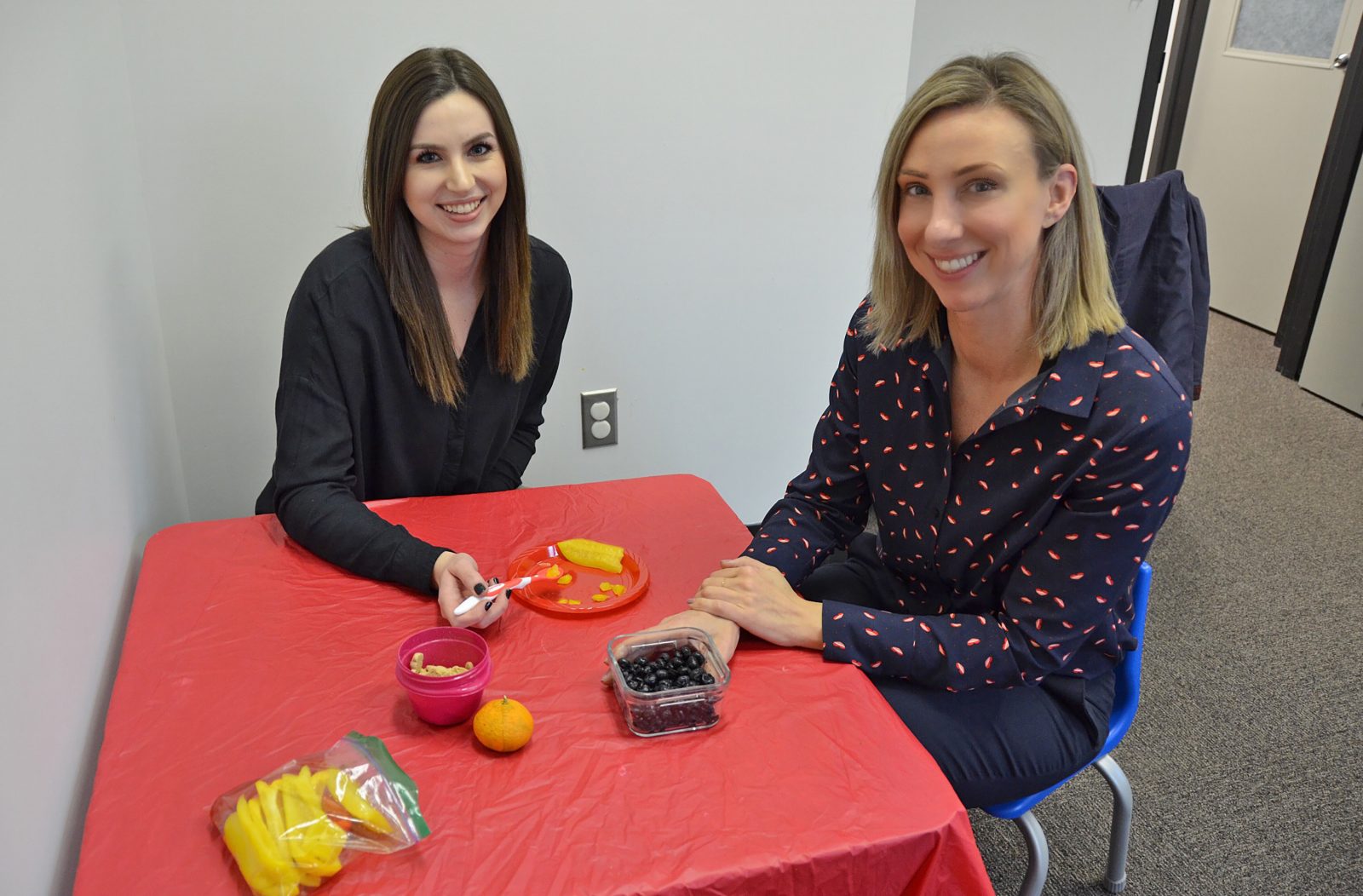 Brock University master’s student Laura Tardi (left) and her supervisor, Associate Professor of Applied Disability Studies Kimberley Zonneveld, are looking for picky eaters between the ages of two and 17 years old to participate in a new research project.

It’s a common scene at the dinner table: parents begging and pleading children to “please just eat the broccoli,” or anything else on the plate that isn’t a hot dog or mac and cheese.

What do parents do? While it’s crucial for children to get their nutrition from the food they eat, if they refuse to eat that food, the options seem limited.

They’re comparing the effectiveness of two versions of a non-intrusive mealtime strategy designed to get children and youth who are picky eaters to expand their food range.

The team is seeking research participants to help.

“We’re currently looking for picky eaters between the ages of two and 17 years old who do eat a wide variety of foods, but their parents are hoping to get them to eat a couple of more foods,” says Tardi.

Typically, these ‘more foods’ tend to be fruits and vegetables, she says. 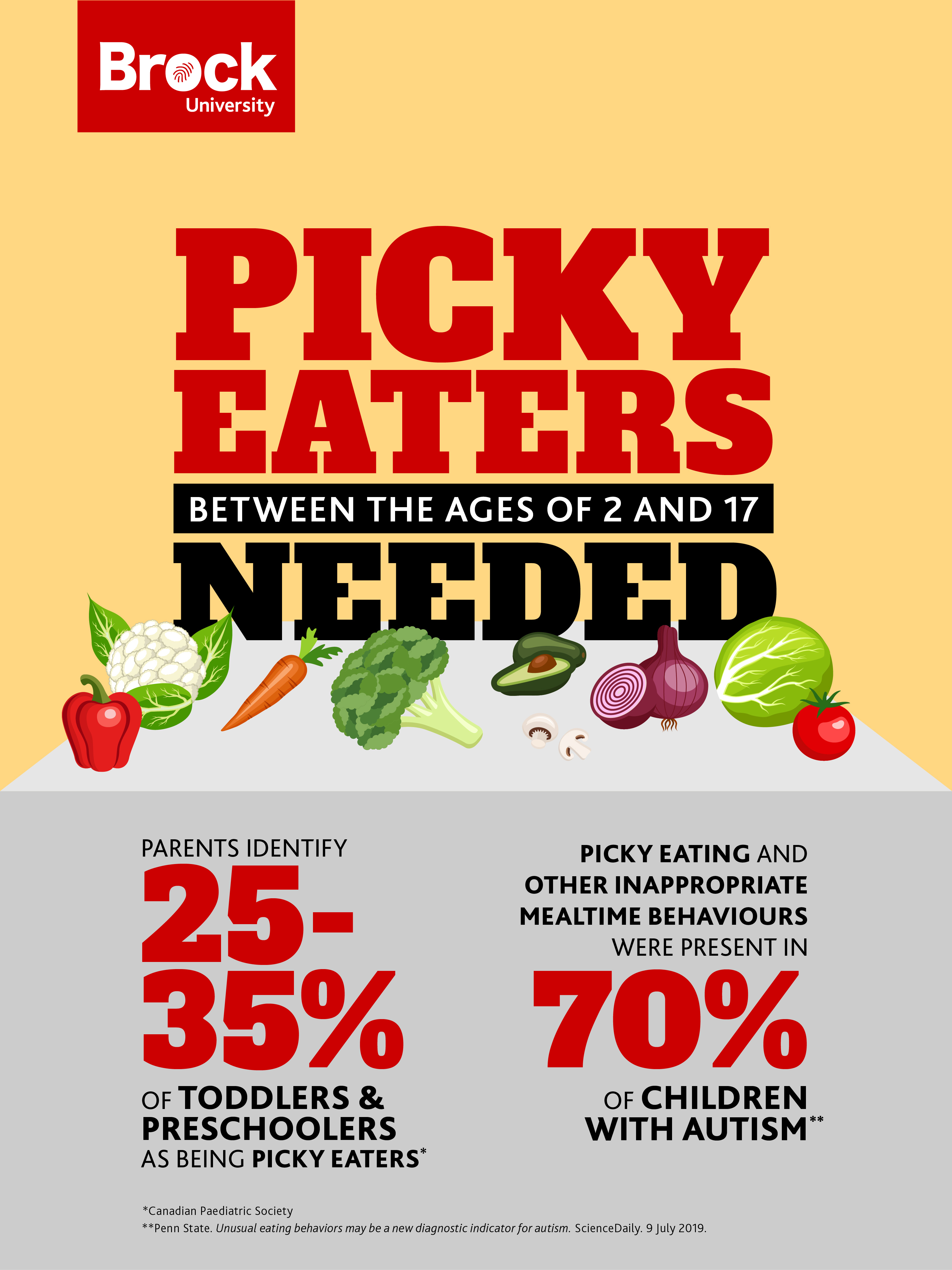 Research on picky eaters to date has tended to focus on one of several strategies to get kids to eat a wider range of foods. Tardi and Zonneveld are comparing versions of a particular procedure to see if one works best.

“Prior research has found different versions of this procedure to effectively increase the range of food children will eat,” says Zonneveld. “However, what remains unknown is which version of this procedure works best — and quickest. That’s what we’re trying to figure out.”

In one condition, children will be presented with three bites their favourite foods followed by one bite of the target food (something they don’t typically eat, such as broccoli).

In the other condition, children will be presented with an empty spoon three times followed by a spoonful of the target food. In both cases, the children will receive verbal praise after completing each step.

“If both methods are found to be equally effective, it may be best to present a few bites of an empty spoon rather than a few bites of the child’s favourite food to get the ball rolling before presenting the target food because children’s favourite foods, like candy and chips, tend to be less healthy,” says Zonneveld.

Determining the best way to get kids to eat foods that they normally would refuse could be a breakthrough for parents, serving as an effective, non-intrusive treatment for picky eaters, says Tardi.

The stakes in doing so are very high.

“There are a lot of problems associated with picky eating,” says Tardi. “Vitamin and other nutritional deficiencies could result in stunted growth, among other problems.”

Zonneveld also notes that “it can be quite stressful for parents of picky eaters, so finding an easy and effective solution to help the whole family at mealtime is the ultimate goal of this study.”

“We are expanding this scope of this research to include children with and without a developmental disability to extend the literature and to provide solutions for all families,” says Zonneveld.

To enroll in the study, parents should contact Tardi at lt17dj@brocku.ca or Zonneveld at kzonneveld@brocku.ca