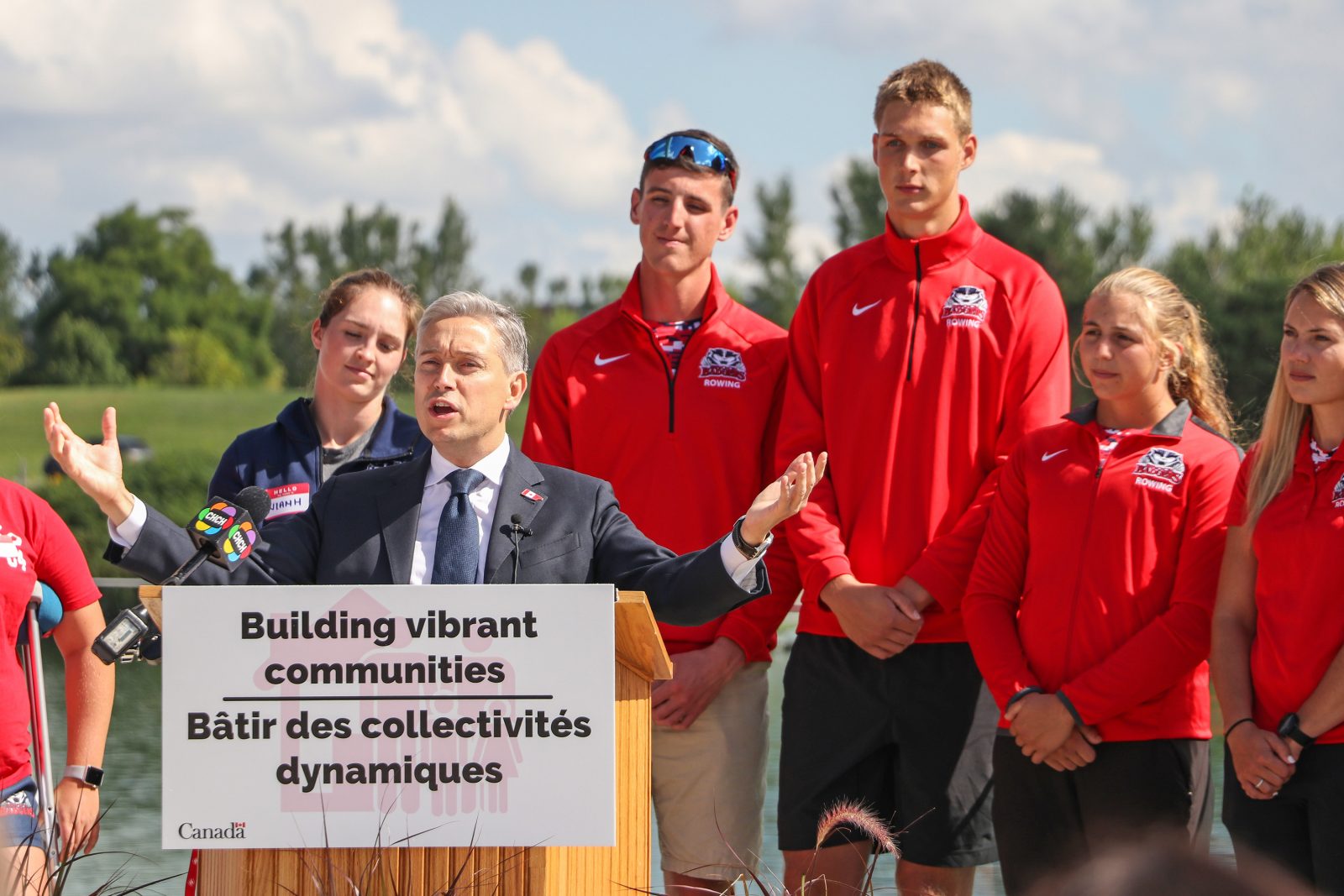 François-Philippe Champagne, Minister of Infrastructure and Communities, announced the federal government's financial contribution to the 2021 Canada Summer Games in Niagara during an event held Thursday, Sept. 5.

With major funding now in place, organizers of the 2021 Canada Summer Games are ready to start changing the sporting landscape of Niagara.

The federal commitment matches the funding announcement made by the Ontario government just three weeks earlier.

Speaking at the Welland event awash in late-summer sunshine, Fearon said that hosting the 2021 Canada Summer Games will be a major point of pride and achievement for the Niagara region.

“The support provided by the Government of Canada is applauded by community members across the region. It allows Niagara to be showcased across the entire country and brings us all together as Canadians,” Fearon told the gathering, as numerous uniformed Brock Badger athletes formed a backdrop for the event.

Fearon, who is also the federal government’s appointee to the 2021 Canada Summer Games Host Society, said Brock is proud to be contributing the land on which Canada Games Park will be built, along with $3.5 million in-kind through the use of Brock’s facilities during the Games, and a $500,000 financial contribution. University faculty, staff and students will be participating and serving as contributors and volunteers in support of the event’s success. Additional funding for the Games’ infrastructure requirements will come from Niagara municipalities and the Niagara Region

“It is an honour to be working alongside other partners, with a fantastic team, to help make this initiative a success,” Fearon said.

More than 5,000 athletes will compete in 18 different sports from Aug. 6 to 22, 2021, with all competitions taking place across Niagara municipalities.

To be built in what are currently Parking Lots U and V (Zone 2), Canada Games Park — the most significant infrastructure project as part of the Games — will include a sport and ability centre, arenas, gymnasiums, an outdoor facility with a track, an athletic field and beach volleyball courts. Thursday’s announcement also included funding for the temporary installation of a modular, above-ground swimming pool at the University, which will serve as a warm-up pool for the swimming competitions being held inside Brock’s Eleanor Misener Aquatic Centre. After the games are complete, the pool will be transferred to the Town of Lincoln and used as a community pool.

Fearon said Associate Vice-President, Facilities Management Scott Johnstone and his team will be instrumental in facilitating the infrastructure and facilities to be available during the games, such as Brock’s student residences, which will serve as the Athletes’ Village.

Additionally, Brock will be heavily involved from the academic and student engagement perspective. The University has three Canada Games academic committees in the areas of research, curricular and community engagement.

“We’re looking for ways to maximize the partnership between the Games and Brock, from identifying collaborative research projects and experiential learning to creating volunteer community engagement opportunities,” said Sport Management Associate Professor Julie Stevens, who was named Special Advisor to Fearon for the Canada Games and is the lead for Brock’s academic activities around the two-week event.

The Research Committee, chaired by Jonathan Younker, Head, Library Systems and Technologies, is examining the ways faculty members can leverage the Games for research purposes, and, in turn, provide the organizers with data that will help them in the future.

The Curricular Committee, chaired by Associate Vice-Provost, Teaching and Learning Madelyn Law, is examining ways to tie the Canada Games into academic programming at the University. This could be through the creation of new courses or by adding related content to existing courses.

Brock’s contribution to the Games’ volunteer force will be largely organized by the Community Engagement Committee, headed up by Kristen Smith, Manager, Community Outreach Programs for Brock’s Student Life and Community Experience.

Community engagement is one of the four pillars in the University’s new Institutional Strategic Plan, and the Canada Games present an ideal opportunity to show how serious the University is about being a collaborative partner in the Niagara region. The Committee is piloting a new University-wide student volunteer program, called the Brock University Volunteer Association, to provide skills development that student can utilize when event organizers need extra hands.