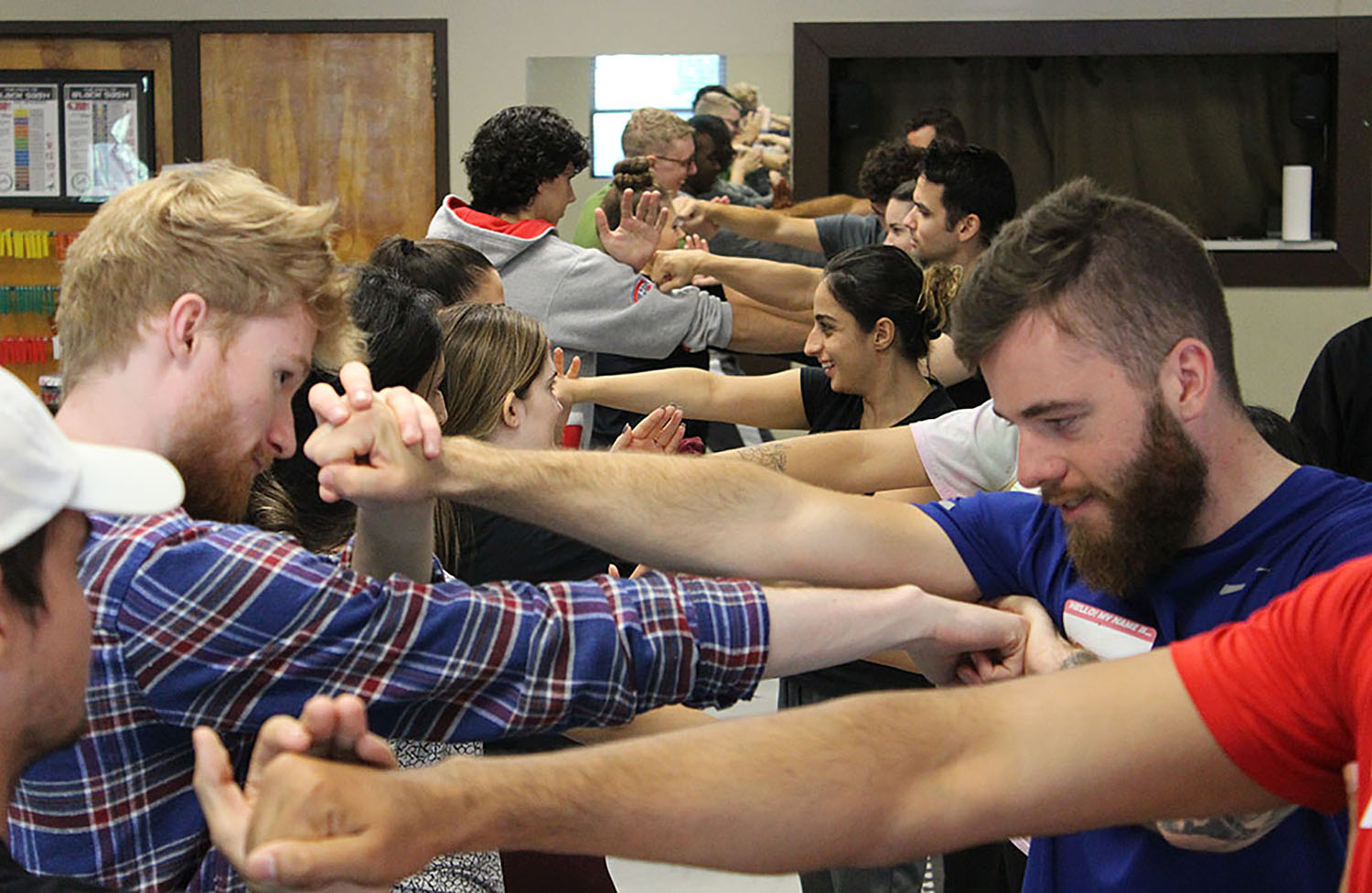 Students in POLI 4P02/5P02 travelled to the Niagara Kung Fu Academy in Niagara Falls to deepen their physical understanding of Bodhidharma and the Wu-Tang Clan’s Enter The Wu-Tang album.

When Lida Shemun realized she would attend a Kung Fu lesson as part of her course in Ancient Political Thought, she wasn’t sure what to make of it.

“I was expecting classic texts, obviously, taking a theory course — but the hip-hop albums took me by surprise,” said Shemun, a fourth-year honours student in Political Science and Labour Studies.

Yet the study of classic hip-hop albums in the context of touchstone texts in Ancient Political Thought is crucial to POLI 4P02/5P02, taught by Associate Professor Stefan Dolgert in the Department of Political Science.

“The course explores five classic texts from ancient Greece, Rome, medieval Islam and Ch’an Buddhism, pairing each with a classic hip-hop album by Nas, Lauryn Hill, Kendrick Lamar, Janelle Monáe and Wu-Tang Clan, in order to see how these diverse pairs of texts speak to one another,” said Dolgert.

Previous iterations of the course have examined relationships between personal accounts of contemporary migrants and Virgil’s Aeneid, or between Greek tragedies and Season 3 of The Wire.

This year, fourth-year and graduate students in Political Science will look at St. Augustine’s Confessions alongside Kendrick Lamar’s Damn, or The Conference of the Birds by Farid ud-Din Attar alongside Janelle Monáe’s Dirty Computer.

But how, exactly, did the class wind up at the Niagara Kung Fu Academy last Tuesday, taking an introductory lesson in the martial art from Sifu Rob Atalick?

Dolgert said the Wu-Tang Clan were inspired by the philosophy and martial arts in the 1970s Kung Fu films of the Shaw Brothers, which depicted the style developed by the Shaolin Monastery in China.

“That monastery’s legendary founder was Bodhidharma, who essentially creates Ch’an Buddhism, which becomes known as Zen when it moves to Japan,” said Dolgert. “Because Ch’an Buddhism invites us to experience ourselves and the world without the distorting prism of language — to engage it directly through practice — it seemed obvious that to begin to understand Ch’an and the Wu-Tang, we had to be transported physically into a space where we could focus on bodily movement rather than staring at PowerPoint.”

Shemun found that her Kung Fu experience developed her understanding of the course materials presented so far this semester. She also noted how the discussion of the historical context of Kung Fu and how it was used for self-defence against those in power during a shift in dynasties related to the lyrics of the Wu-Tang Clan.

“The circular teachings of Bodhidharma made a little more sense in the context of Kung Fu,” Shemun said. “It connected with the Bodhidharma text.”