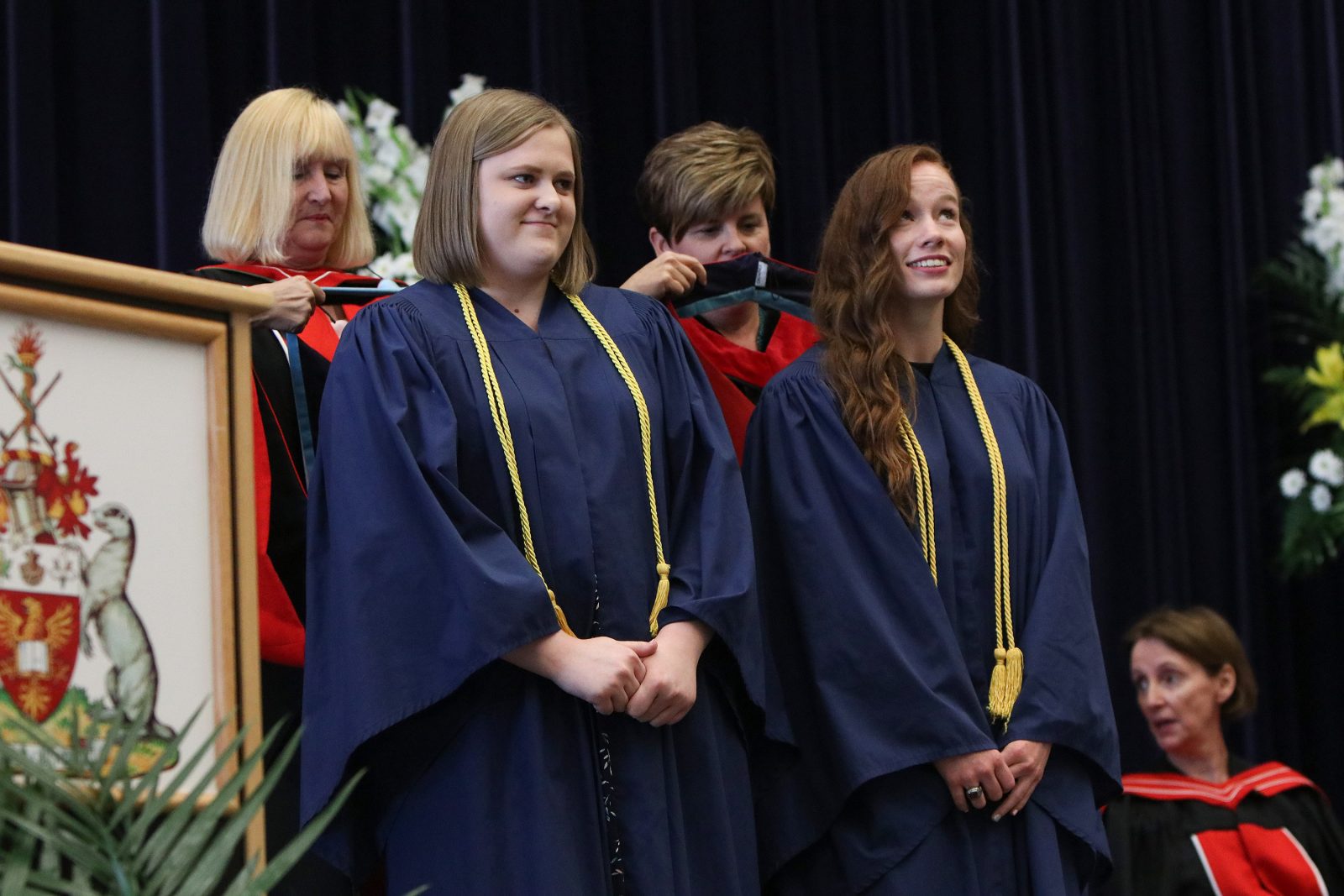 Emily Schaefer (right), Brock's 2018-19 Female Athlete of the Year, is one of 112 student-athletes graduating this week during Spring Convocation.

Students in Emily Schaefer’s classroom may be surprised to learn that their teacher was one of the country’s top varsity wrestlers.

Schaefer, who crossed the stage at Brock University Wednesday, June 12 to receive her Concurrent Education degree, is one of 112 student-athletes graduating this week during Spring Convocation.

“It’s crazy to think that my time as a Brock student-athlete is coming to a close,” she said. 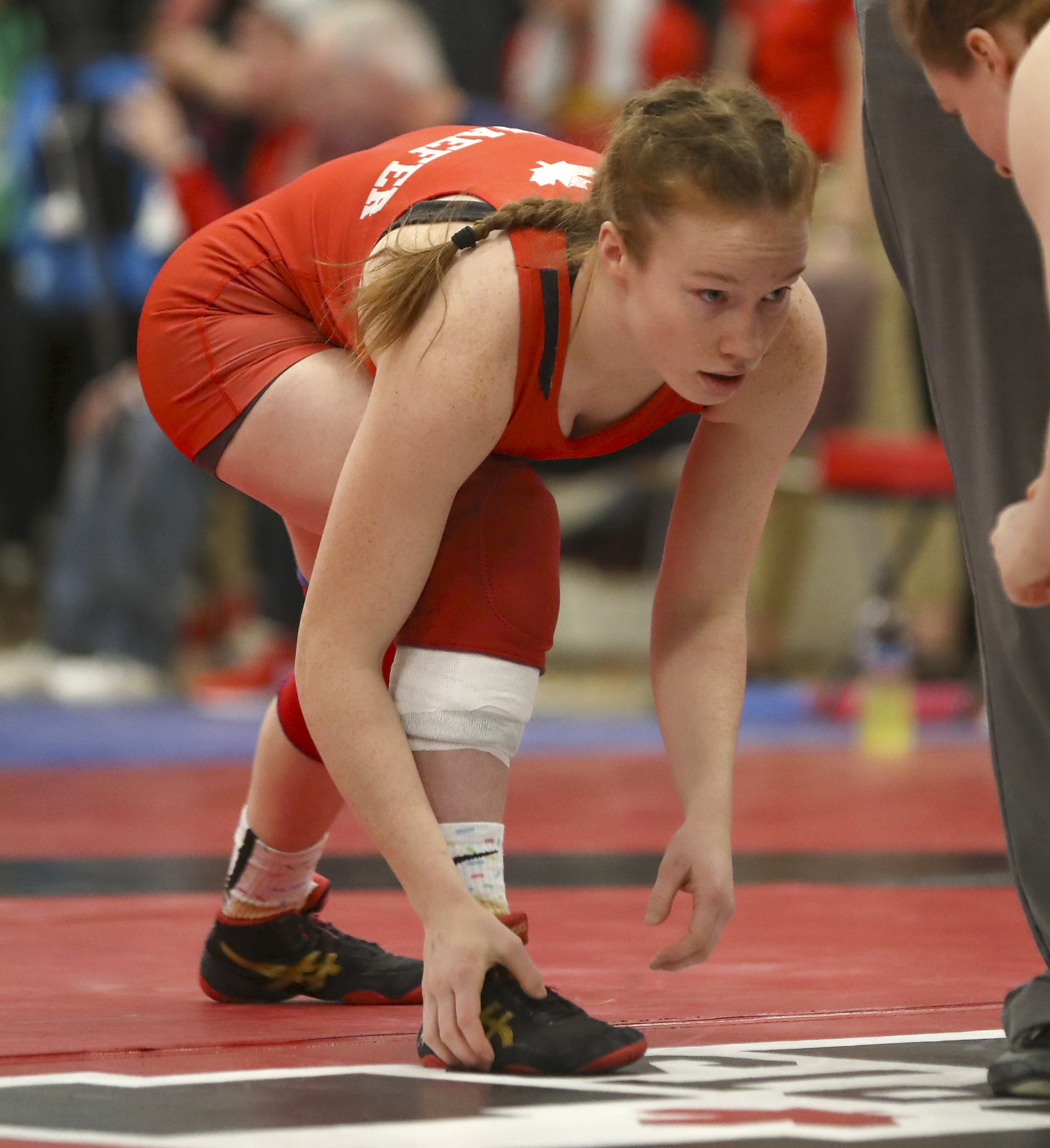 Emily Schaefer is the top-ranked wrestler in U SPORTS for her weight class and captured her fourth-consecutive gold medal at the national wrestling championships in Calgary earlier this year.

Schaefer has spent five years at Brock University, but said she feels like she has been a part of the Brock community for a lifetime.

“It wasn’t that long ago I was trying to decide which school to attend for post-secondary studies,” she said. “When I finally decided on Brock, it was because I recognized the culture and commitment of the wrestling team is something I wanted to be a part of, and because the academic program was one in which I felt I could thrive.”

Schaefer is the top-ranked wrestler in U SPORTS for her weight class and captured her fourth-consecutive gold medal at the national wrestling championships in Calgary. Earlier this season, she also won her fifth-consecutive provincial gold medal.

In March, she was named Brock’s Female Athlete of the Year.

“I would be a completely different person if I had not pursued wrestling,” Schaefer said. “Wrestling has pushed me physically, mentally, and emotionally more than any other thing in my life. I have grown in confidence, in leadership, in perseverance, in discipline, in friendships and in my faith. I really believe it’s a sport that helps people realize their potential.”

A titan in the classroom, Schaefer earned U SPORTS Academic All-Canadian honours every year she was at Brock, and is equally motivated to be successful as a teacher.

She served as a teacher candidate for Centennial Secondary School in Welland and facilitated literacy programs at Prince of Wales Public School in St. Catharines.

In her down time, Schaefer serves as a Sunday school teacher and youth leader at Redeemer Bible Church in Niagara Falls, tutors high school math students, and is continually enrolling in professional workshops.

She spent the last four years heavily involved in the Brock Leaders Citizenship Society, where she accumulated more than 500 hours of volunteering.

Schaefer also served as a student trustee with her hometown school board, Lambton-Kent District, where she organized a board-wide fundraiser to raise more than $10,000 to fund the building of a school in Zambia.

“For motivation to last, it can’t just be a single championship or a medal. It has to be something greater, purposeful and powerful,” the Sarnia native said. “For some, it might be personal growth. For others it might be finding joy in the process. For me, it’s an internal calling to wrestle for God, and experience His freedom on the mats.”

Following in the footsteps of two of her older brothers, Schaefer started wrestling in high school and quickly made an impact by winning provincial and national titles and representing Canada at the Cadet World Wrestling Championships.

At Brock, Schaefer was named the provincial and national Female Rookie of the Year when she arrived on the university wrestling scene during the 2014-15 season.

“Emily has been an absolute joy to coach throughout her five-year varsity career,” said Brock wrestling head coach Marty Calder. “She’s an incredible student, athlete and teammate and gives unselfishly of herself both at Brock and in the community. She is a great role model for any student-athlete to aspire to be.”

Schaefer will take the immediate next steps to begin her teaching career, but plans to continue wrestling.

“Brock has been an amazing experience,” she said. “I appreciate the community and all of the individuals on our campus. The fact that Brian Hutchings, the Vice-President of our institution, would fly across the country to watch our team compete, really speaks to the culture that our school embodies. One that values students, student-athletes, and the people that we are.”