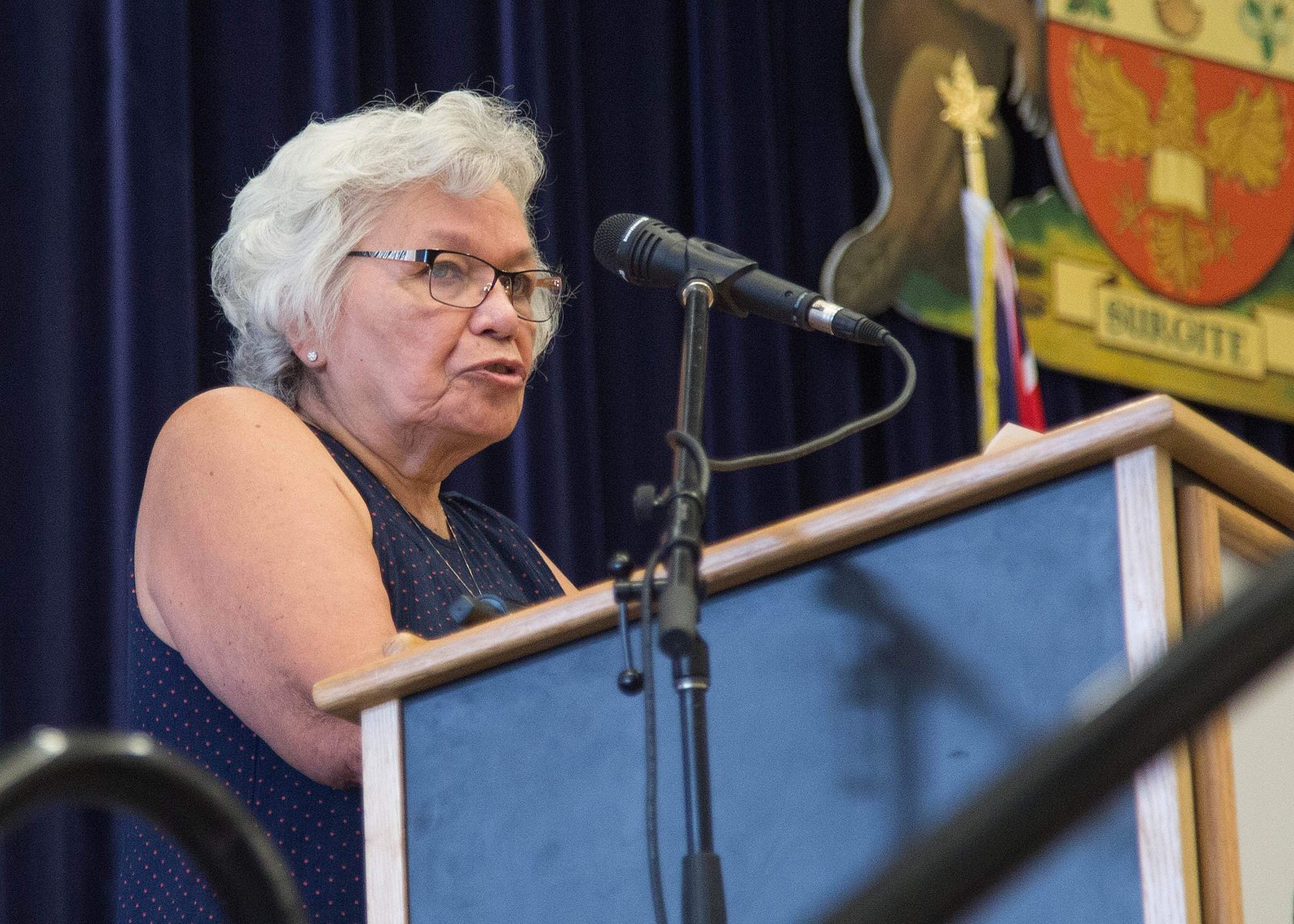 After nine years, Carol Jacobs is retiring as Brock’s Elder-in-Residence.

Carol Jacobs, who was a rich source of wisdom and guidance for Brock’s Indigenous and broader community, is completing her time with the University.

After nine years, Jacobs is retiring as Brock’s Elder-in-Residence and will say goodbye after being part of the Chancellor’s Procession during next week’s Convocation ceremonies.

In her role, she provided spiritual and cultural guidance to students, faculty and staff on campus.

“She touched many lives here in her time at the University,” said Sandra Wong, Aboriginal Academic Support Co-ordinator and Instructor in Brock’s Aboriginal Student Services office. “She was amazing support for staff and students — like having a grandmother at school with you — and shared invaluable traditional teachings with the University community.”

In addition to the one-on-one connection she built with students, Jacobs was a part of Brock’s Aboriginal Education Council (AEC) and Two Row Council, and also represented the University on several Niagara AECs.

“It is impossible to count all the ways Carol has been there for Brock University,” said University Chancellor Shirley Cheechoo. “She is a wonderful advisor, teacher, leader, mentor and most of all, a dear friend. She has dedicated her life to the service of humanity.”

Cheechoo, who made history in July 2015 as the first woman and first Indigenous Canadian to be appointed to Brock’s ceremonial leadership role of Chancellor, offered thanks to Jacobs for “showing me her strength.”

“Her heart was a true reflection of her commitment.”

“I would like to thank Carol for her contributions over the past nine years to the entire University community and, in particular, for her support in establishing a welcoming and inclusive university for Indigenous students,” he said. “Her contributions facilitated outstanding engagement and understanding amongst all students, faculty and staff members.

“Her legacy is represented by the improvements and gains at Brock University in relation to Indigenous community engagement and furthering the University as an inclusive post-secondary institution,” he said.

Wong said Jacobs, who is “steeped in the Haudenosaunee culture,” opened many doors for Brock because of her reputation and vast network of connections.

“When Carol and I would go to the Chiefs of Ontario Conference and National Assembly, she would know many of the people there,” she said. “She would tell them about her work with Brock University; that created a line of communication with Indigenous leaders and an awareness of Brock.”

Wong described Jacobs’ time on campus and her ability to share her lived experience as a “gift” to the University.

“It was so important to our Aboriginal students,” she said. “Carol believed in the power of education and was very encouraging in each student’s educational journey. We were very fortunate to have her for as long as we did.

“She did a lot of work here. She helped to progress the University and its mindset.”

Brock’s inaugural Vice-Provost Indigenous Engagement, Amos Key, Jr., starts his role at the University on July 1 and will be involved in the future direction of the Elder-in-Residence position.