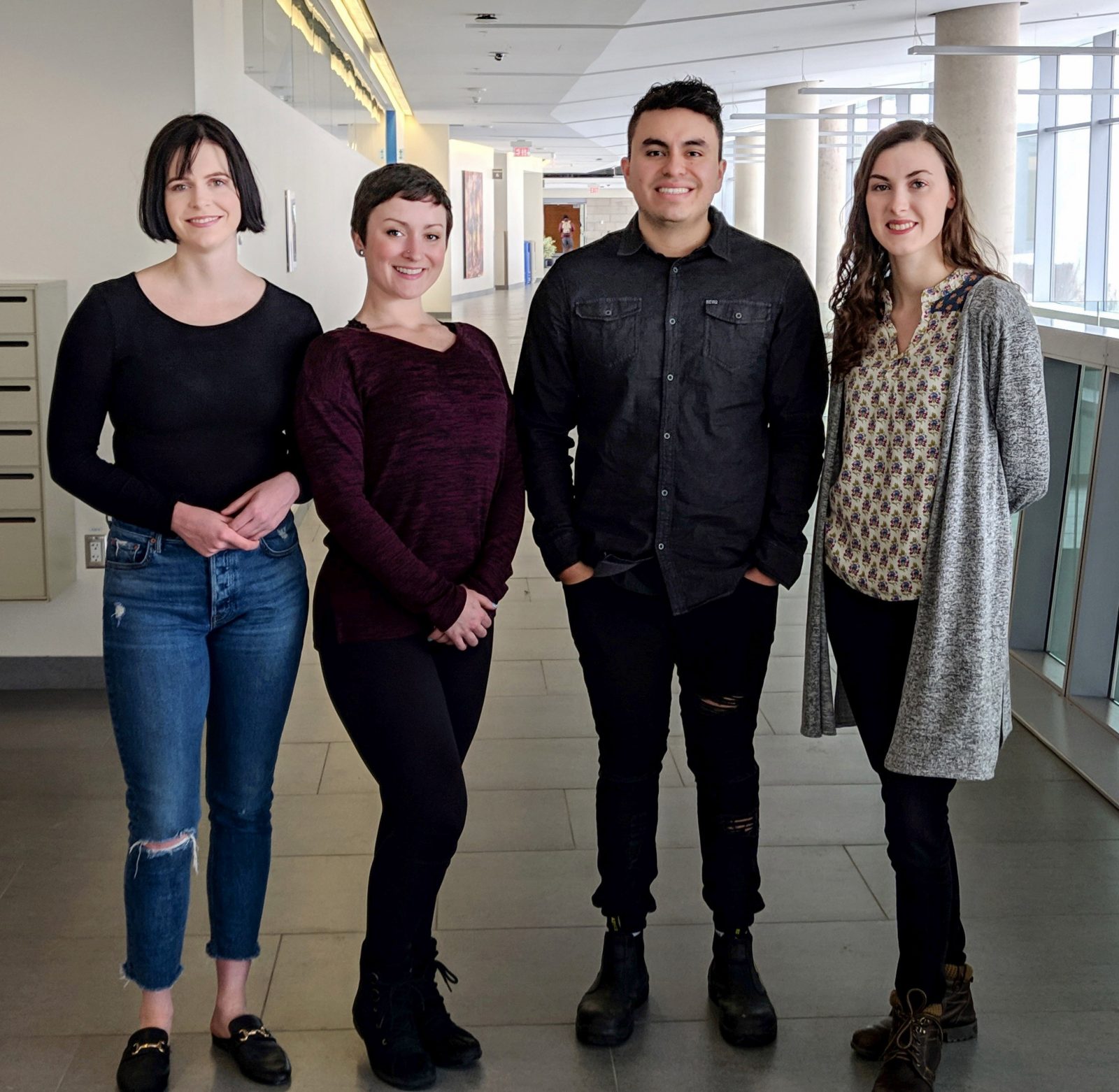 Brock University students (from left) Sarah Walker, Danielle Williams, Mateo Andrade and Emily Ham have placed in the Top 25 in the National Science Action! video competition. Also into the Top 25, but not pictured, is Michael McAlpine.

For the second year in a row, 20 per cent of the semi-finalists in a national video competition for student research are from Brock University.

The Natural Sciences and Engineering Research Council of Canada (NSERC) announced the Top 25 in its annual Science, Action! competition on Wednesday, April 10, and all five Brock entries that had been shortlisted in the previous round have moved on. 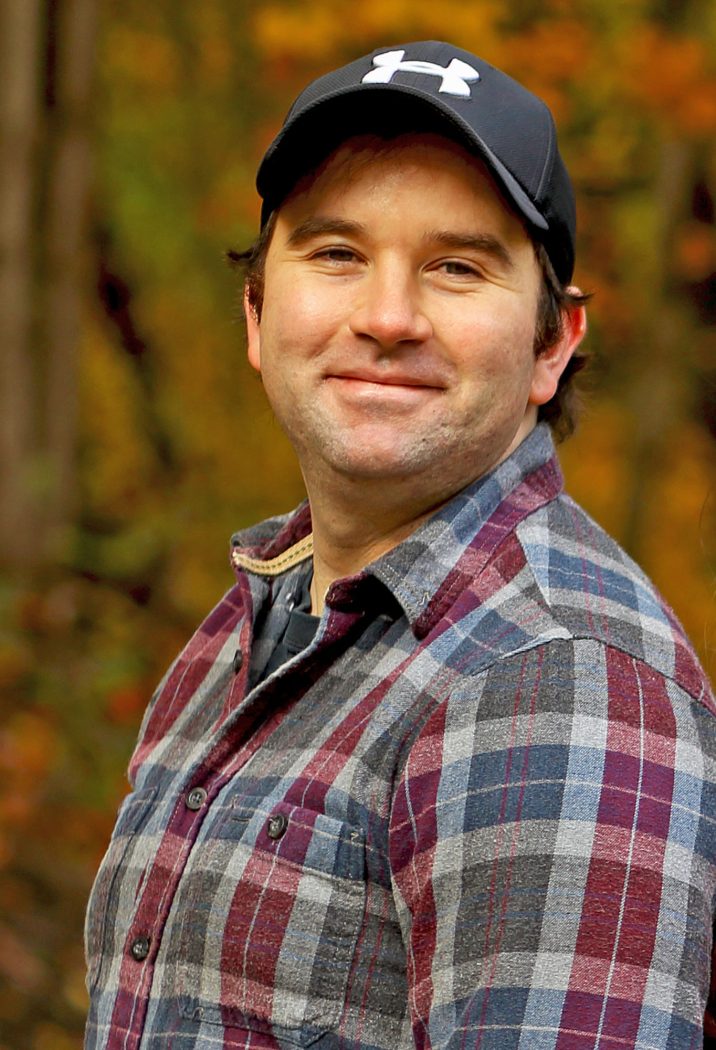 “Making it into the semi-final round for the second-straight year speaks volumes about the high quality of research produced by Brock students,” says Tim Kenyon, Brock’s Vice-President, Research. “It also highlights their ability to make compelling the value and significance of their work, and the superb research mentoring they receive from their supervisors.”

While the students advancing to the final 25 were voted on through YouTube views, the next decision will be left up to judges, who will announce the Top 15, including the overall winner, in May.

“We’re so proud of our students’ important, impactful research as seen in their Science, Action! NSERC videos,” says Diane Dupont, Interim Dean of Graduate Studies. “They communicated their work very effectively in language and imagery easily understood by a wide audience. This is a vital skill that will serve them well in their future careers.”

Danielle Williams, a PhD candidate in Biotechnology, studies how plants can be used to create anti-cancer drugs. Plants produce a wide range of chemicals with important medicinal properties, many of which belong to a class of compounds called alkaloids. Madagascar periwinkle produces more than 100 alkaloids, two of which are chemotherapeutics used to treat many cancers, including Hodgkin lymphoma. Due to the low accumulation of these alkaloids in plants, production of these medicines is costly. The aim of Williams’ research is to engineer yeast strains capable of producing alkaloids in a bioreactor system, which will make it possible to generate higher yields of these valuable chemicals at a lower cost.
Watch here: youtube.com/watch?v=WslLSXdu7nA

Emily Ham, a master’s student in Earth Sciences, studies how microplastics have become a cause for concern in recent years due to their widespread distribution and potential threat to aquatic life. Her research investigates the presence and pathways of microplastics in the Niagara region, which involves investigating treated wastewater, local stream water and agricultural soil samples from fields applied with wastewater biosolids. Results indicate that microplastics are widespread in the Niagara region, likely contributing to plastic concentrations in Lake Ontario. This research will help inform individuals and municipalities on the impact that water treatment and agricultural practices have on the distribution and accumulation of microplastics in freshwater bodies.
Watch here: youtube.com/watch?v=_fITsR9_X18

Mateo Andrade, an undergrad Biotechnology student, works under the wing of experts in Assistant Professor Feng Li’s bioanalytical chemistry research group. His project involves the use of DNA nanotechnology to develop next-generation point of care devices. These novel devices are developed in order to detect a multitude of biomarker targets that are linked to known diseases. This is accomplished by using DNA walkers. He hopes that his research contributions will help to address meaningful biological and biomedical questions.
Watch here: youtube.com/watch?v=v5PGDSQQjdM

Michael McAlpine, a PhD candidate in Health Sciences, is researching how nutrition and diet can influence the human body. More specifically, McAlpine is determining the effectiveness of consuming polyphenols from tea to improve bone quantity and quality as well as revealing the mechanisms through which this might occur.
Watch here: youtube.com/watch?v=XgRsNqFVoXM

Sarah Walker, a PhD candidate in Biology working under the supervision of Professors Robert Carlone and Gaynor Spencer, studies neuronal regeneration in the central nervous system of the pond snail, Lymnaea stagnalis. Unlike humans, the snail can regenerate cells within its brain as an adult, making it a great system to investigate how regeneration works. Walker studies microRNAs, which are small non-coding RNAs, and their distribution within regenerating cells. Using fluorescent tags, she is able to visualize their localization during different stages of regeneration and determine how up-regulating/inhibiting their expression alters neuronal growth.
Watch here: youtube.com/watch?v=8wo_3u9vfMo