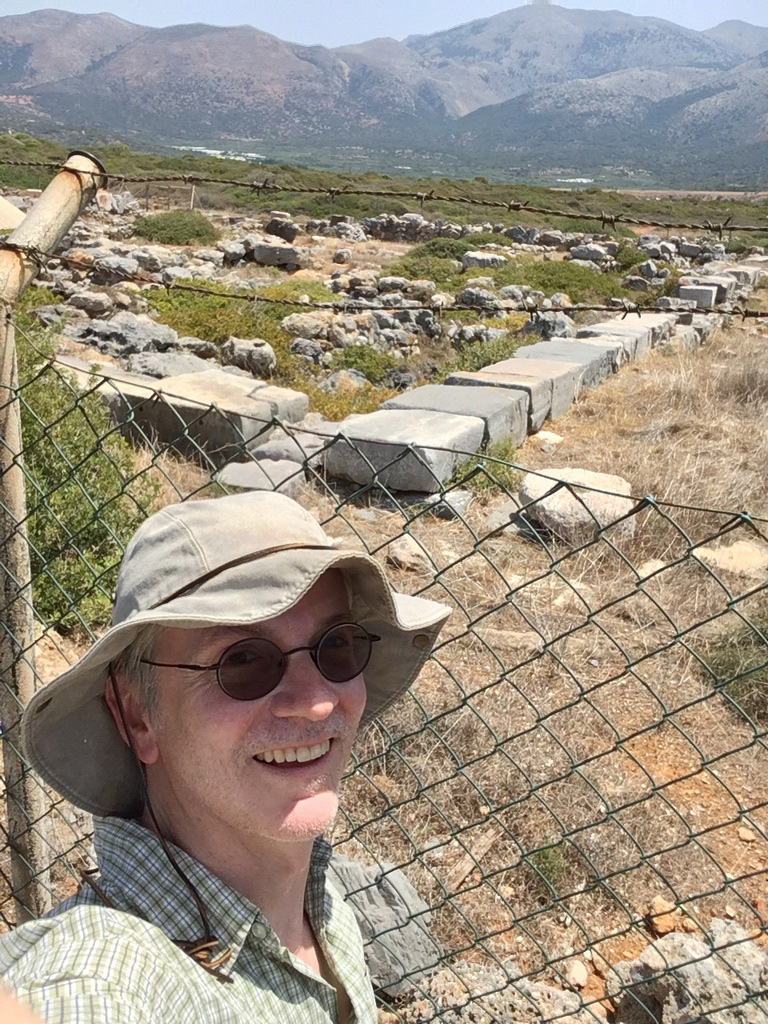 Angus Smith, Associate Professor in the Department of Classics.

Angus Smith has literally moved tons of soil looking for fragments of pottery to piece together our understanding of life in ancient Crete.

The Department of Classics Associate Professor was recognized with the Faculty of Humanities Award for Excellence in Research and Creative Activity at the annual Humanities Research Institute (HRI) fall symposium Tuesday, Dec. 11.

Smith researches mortuary remains and ceramic analysis in the Bronze Age Aegean and is the Associate Director of Excavations for The Gournia Excavation Project in Crete. The international team of archaeologists excavated the Minoan town of Gournia from 2010 to 2014. Gournia was a significant Late Bronze Age (c. 1500 BCE) town, featuring cobbled streets, fortifications and a Minoan palace. It was a regional administrative centre and conducted trade for its products across the Aegean and Near East.

Smith has been working at publishing the pottery finds from the site, including several deposits of pottery used during feasting, which he presented as part of the HRI symposium.

“Although spending summers in Greece is certainly not a chore, the excavation, processing and analysis of literal tons of soil and artifacts, and the preparation for publication of a complex archaeological site can be a daunting task,” said Smith.

Archaeological fieldwork requires a large team of archaeologists, scholars, students and volunteers, both in the field and in preparing work for publication.

“Without my team members, including many Brock students who have helped as students and served as research assistants over the years, my research would not have been possible,” he said.

Smith’s co-authored volume, Ayia Sotira: A Mycenaean Chamber Tomb Cemetery in the Nemea Valley, Greece is a publication of the results of the excavation of six Mycenaean chamber tombs in the Nemea Valley of the Argolid region in Greece. The work includes analysis of artifacts including pottery, jewelry, figurines, metal objects, skeletal remains and botanical remains.

His publications also include work on pottery and society at the Late Minoan III settlement and cemetery of Mochlos, on Crete, and he is currently working on a project involving the study of legacy material from unpublished excavations of Minoan tombs on Crete.

His research has been funded by the Institute for Aegean Prehistory, SSHRC, and other sources including Brock’s Humanities Research Institute.