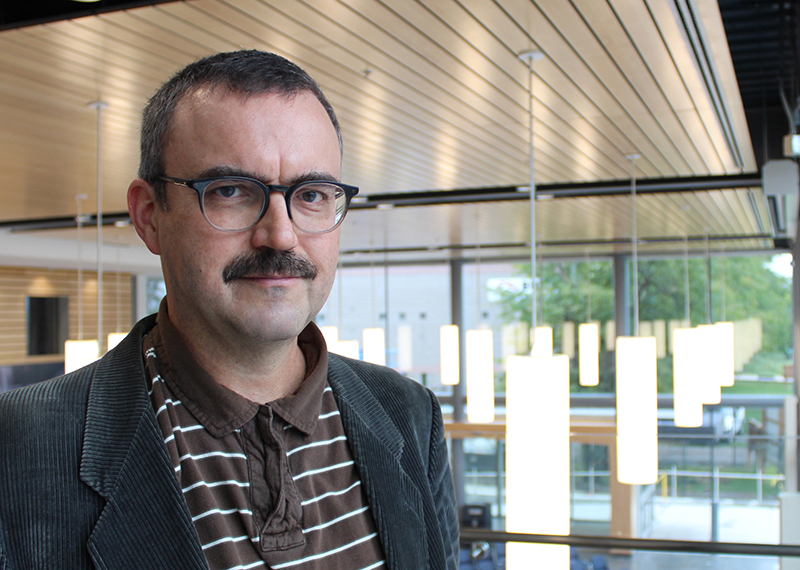 Anthony Kinik, Assistant Professor in the Department of Communication, Popular Culture and Film, travelled to Italy to launch The City Symphony Phenomenon: Cinema, Art, and Urban Modernity Between the Wars

Each is a fixture in the city symphony genre, which is at the centre of the Brock assistant professor’s latest book.

City symphonies were created as a direct reaction to the rapidly developing urban environments of the early 20th century. Some avant-garde artists turned to the most modern medium of the day, and the one thought most suitable for capturing the dynamics of the metropolis: film.

The genre takes its name from its most famous example, Berlin: Symphony of a City. The 1927 film was a box-office success — unusual for an experimental film — and inspired an international movement.

Previously, only a handful of these experimental documentaries were known to have been produced between the First and Second World Wars.

“People have tended to talk about the same six to eight films,” says Kinik, who works in Brock’s Department of Communication, Popular Culture and Film.

Convinced there was more to the story than had been reported, Kinik and his colleague Steven Jacobs from the University of Ghent began teaching workshops on the topic in 2008. The team scoured libraries, databases, cinémathèques (small motion-picture libraries specializing in historical films) and museums around the world in search of lost and forgotten films.

Eventually, Kinik and Jacobs teamed up with the organizers of Le Giornate del cinema muto (known in English as the Pordenone Silent Film Festival) to track down archival prints of many of the films they’d discovered and to curate screenings at the festival.

In five years of international sleuthing, Kinik and his European collaborators tracked down more than 80 films, most of which had been forgotten until now. The result is the new book, The City Symphony Phenomenon: Cinema, Art, and Urban Modernity Between the Wars.

In addition to invited chapters from international scholars, The City Symphony Phenomenon includes a detailed catalogue of the complete list of rare films unearthed by the project team. Kinik calls their survey of city symphonies from 1920 to 1940 a “significant contribution to historical film research.”

The team’s research confirmed that city symphonies were not just a Western phenomenon as many had assumed. Among the hidden treasures, the team found symphonies from Sao Paulo and Tokyo.

“Our research shows the depth of material available,” Kinik says.

Although each film tells the story of a place, city symphonies are decidedly not travelogues. Creators eschewed the landmarks and clichés of tourist brochures. Instead of representing the city in a straight-forward and didactic manner, filmmakers chose a poetic approach that shunned explanatory intertitles and other forms of narration “to create a universal language of film that didn’t rely on the spoken word.”

Early filmmakers experimented with new lenses, film stock and technologies to depict the frenetic pace and spectacle of modernity, including its bold new forms of architecture, its rapid transportation, and its electrified streets.

Decades later, the genre still resounds across screens today. The opening montage of Woody Allen’s Manhattan is an obvious homage to the art form, says Kinik. But the techniques and sensibilities of the city symphony continue to be used everywhere — from music videos to advertising — often as a kind of motion picture shorthand to represent the complexities of city life.

Kinik and his colleagues return to the Pordenone Silent Film Festival from Oct. 6 to 13 to officially launch The City Symphony Phenomenon: Cinema, Art, and Urban Modernity Between the Wars.