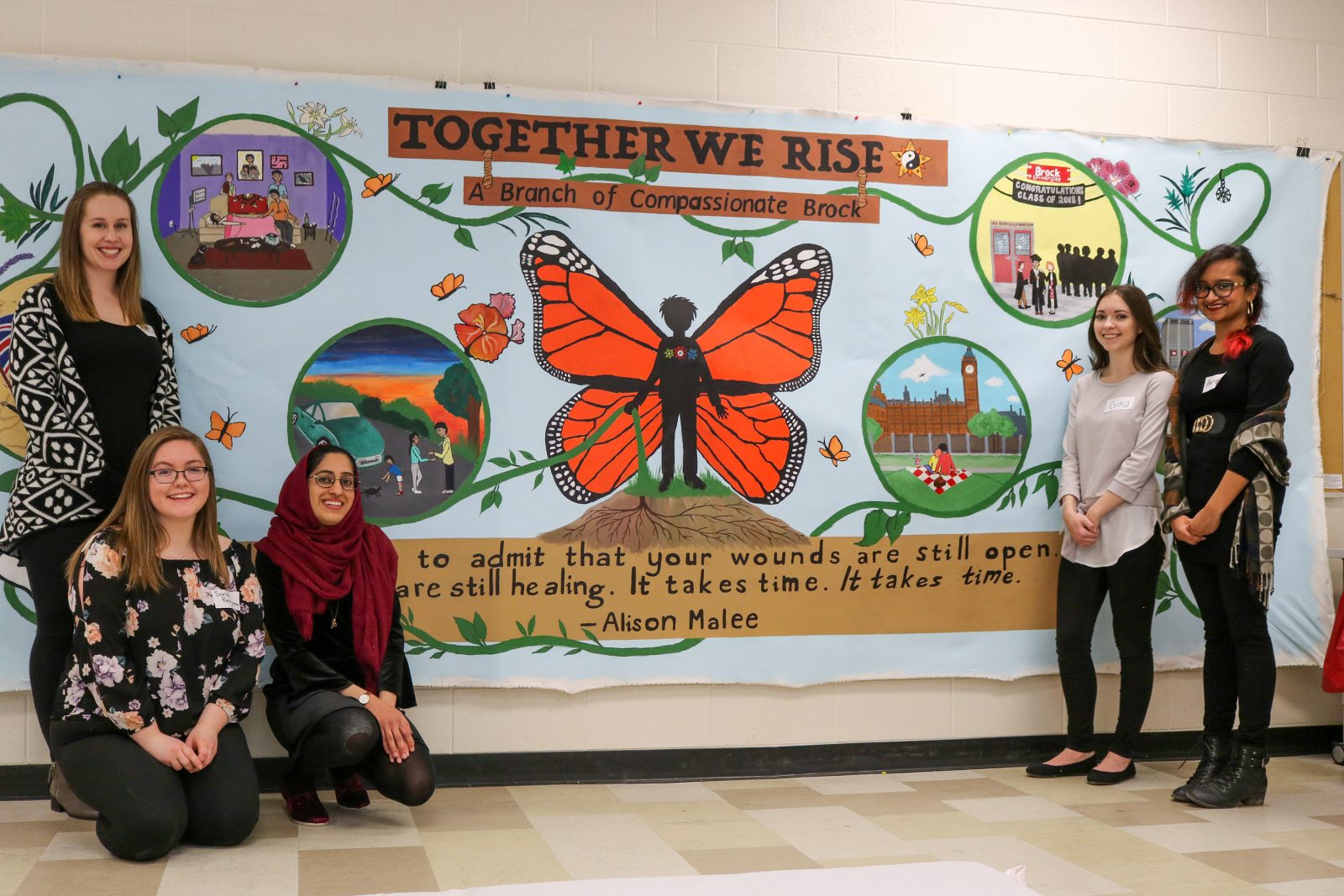 There’s an eye-catching new piece of artwork on display at Brock’s main campus that is meant to do more than just draw stares.

The colourful creation, found in the hallway where Welch Hall and South Block meet, aims to help normalize death and grief — heavy topics for most people who attempt to broach them.

The mural was the work of a group of recent Brock University Public Health graduates, who made it their final task before saying goodbye to their alma mater. They began work on the project in January and made sure to have it completed in time to see it hung before students returned in September for the new academic year. 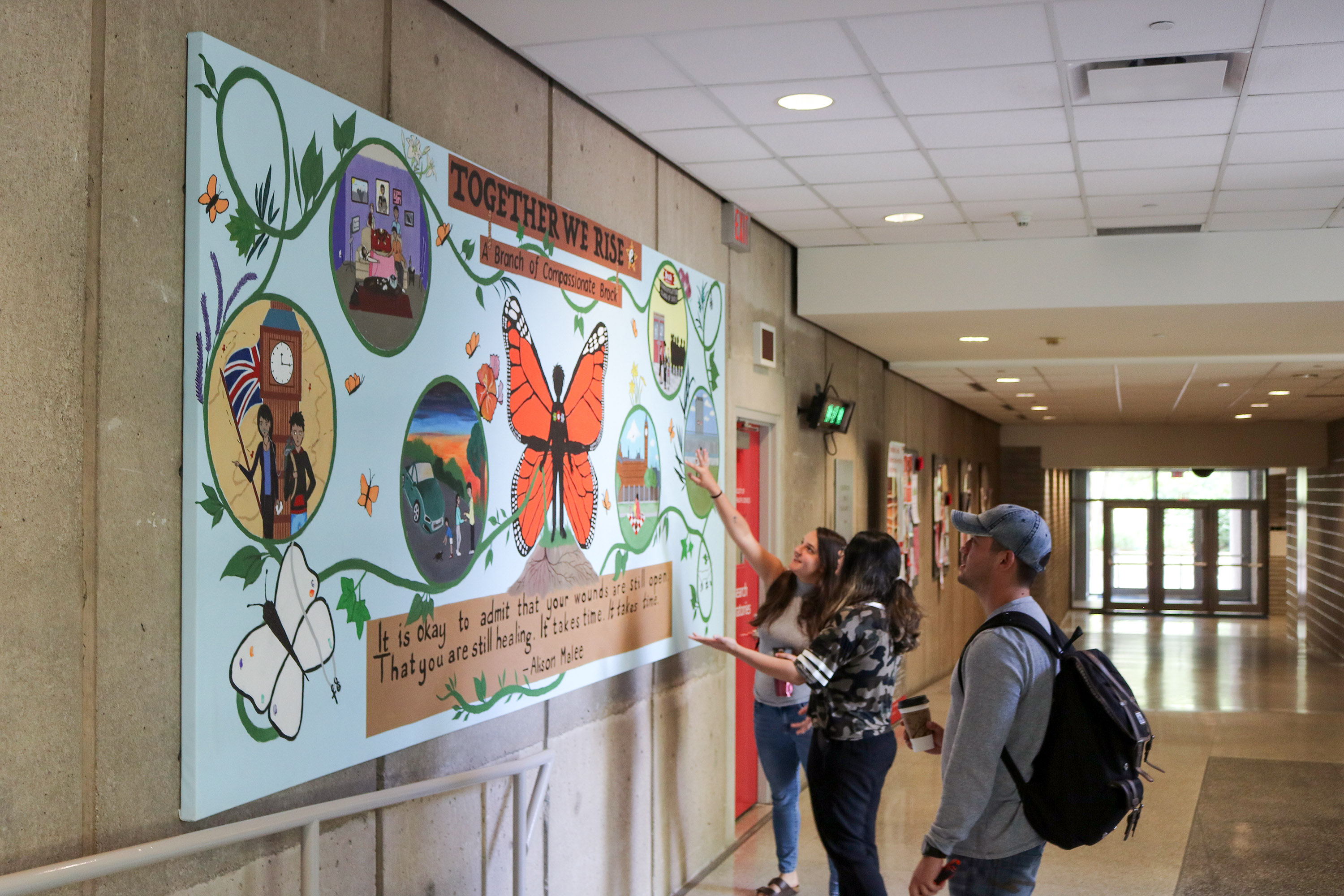 A new mural meant to normalize conversations of death and grief now hangs in the hallway of Brock’s main campus where Welch Hall and South Block meet.

“It has been quite a journey,” says Public Health alumna Aiman Ali (BPH ’18). “What started out as the creation of a product intended to provide the Brock community with something to reflect on and socialize about their experiences with death, dying and caregiving, also brought together those who work in the sciences and arts.”

The project is part of Compassionate Brock, a student-led group that aims to nurture a compassionate environment on campus.

“Having a student-created mural that draws attention to something we all deal with helps make it easier to have conversations about what someone might be struggling with,” says Associate Professor of Health Sciences and Director of I-EQUIP Madelyn Law.

The TWR team worked with partners from Pallium Canada and Hospice Niagara to ensure their goal was community-based and inclusive. The engagement with Hospice Niagara also allowed them to modify and revise their initial concepts to be more reflective of community needs and practices.

Through this reciprocal relationship, Hospice Niagara staff were pleased to get involved and support the students in their vision.

“Together We Rise seeks to make Brock and Niagara a stronger, more compassionate community,” says Hospice Niagara Marketing and Communications Manager Shari Willerton. “It’s often not easy for people to talk about dying and death, and community involvement is crucial to help break down social attitudes.”

TWR approached their goals with the premise that in today’s society, death and death-related topics are taboo.

“Unfortunately, most people are not comfortable asking those who may be struggling with caregiving or bereavement how they are doing,” Perryman explains. “Many individuals are unsure how to offer support. This mural is a reminder of the shared inevitability of the entire human experience and that no one should ever feel alone.”

The mural consists of many layered concepts and is easily recognizable for its main overarching theme of butterflies, which symbolize change and renewal.

“An important message of the mural is that all of these life events are natural and not separate from each other but rather they can exist simultaneously or out of order,” explains Ali. “It is also a reminder that moving on does not mean you have to forget, and that moving forward is possible.”

Painting of the mural took place at the Marilyn I. Walker School of Fine and Performing Arts (MIWSFPA) with support from the Department of Visual Arts and MIWSFPA’s faculty and staff.

“When people passed by us painting the mural at the Marilyn I. Walker campus, many thought we were Visual Arts students,” Munro says. “This was both surprising and encouraging to hear because we’re not art students or professionals and we wanted to ensure this was done well.”

Completion of the mural was accomplished with the help of numerous student volunteers from the Department of Health Sciences.

“As Public Health students, we were able to add a critical health lens that considers loss and caregiving matters in a way that needs to be acknowledged and addressed as a compassionate university,” added Del Fabbro. “It has been an honour and a privilege to be leaders within the Brock community and we are proud to leave behind this meaningful art piece.”