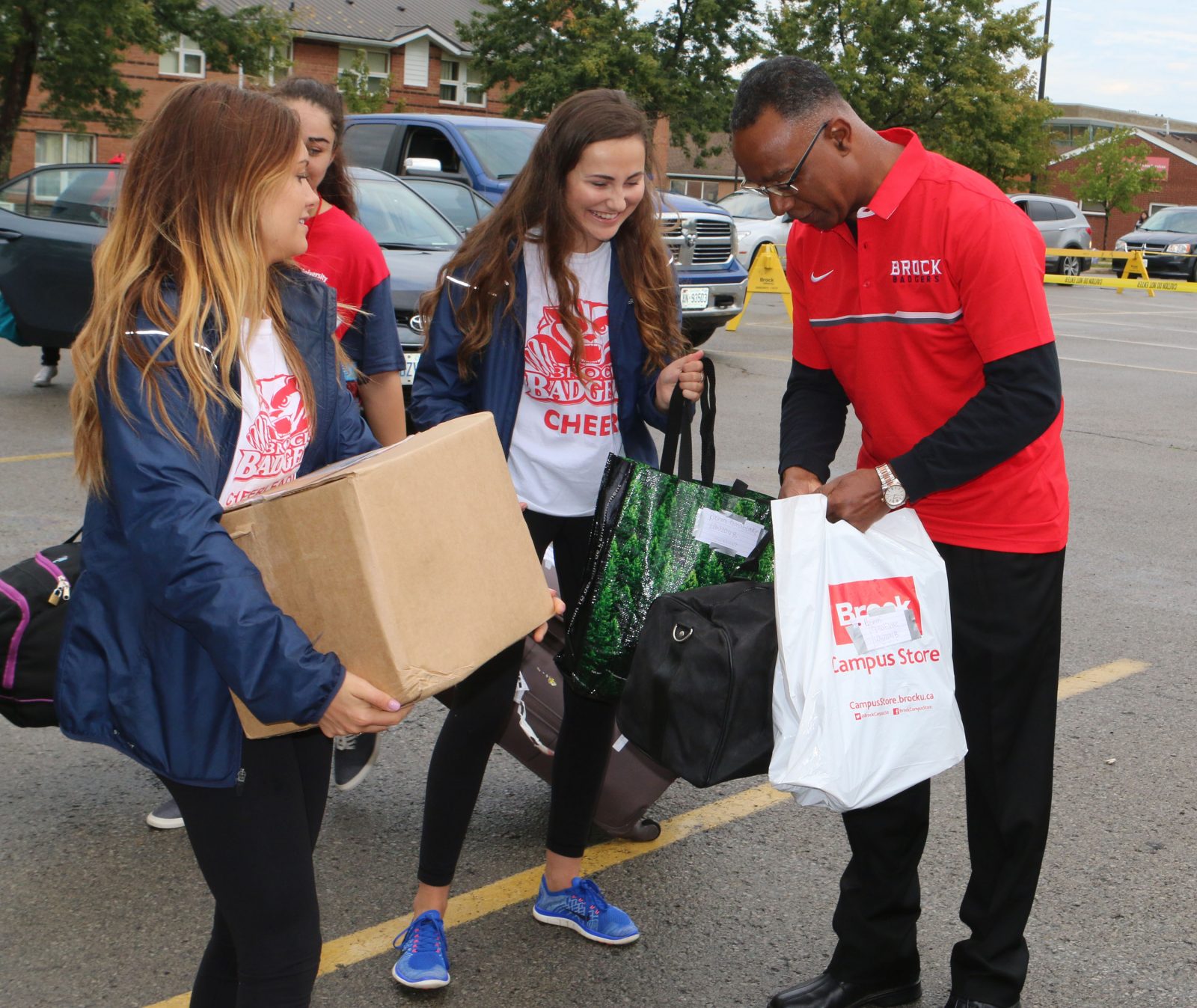 Brock President Gervan Fearon lends a hand to the move-in at Lowenberger Residence.

On a day highlighted by efficient moving, Sil Demedeiros may have set the bar.

Using a rented U-Haul pickup truck, the Hamilton man pulled up in front of the Lowenberger Residence at Brock University Sunday morning, opened up the tailgate and quickly unloaded a mini-fridge and seven equally-sized packing boxes that were all pre-labeled with his son’s name and room number.” 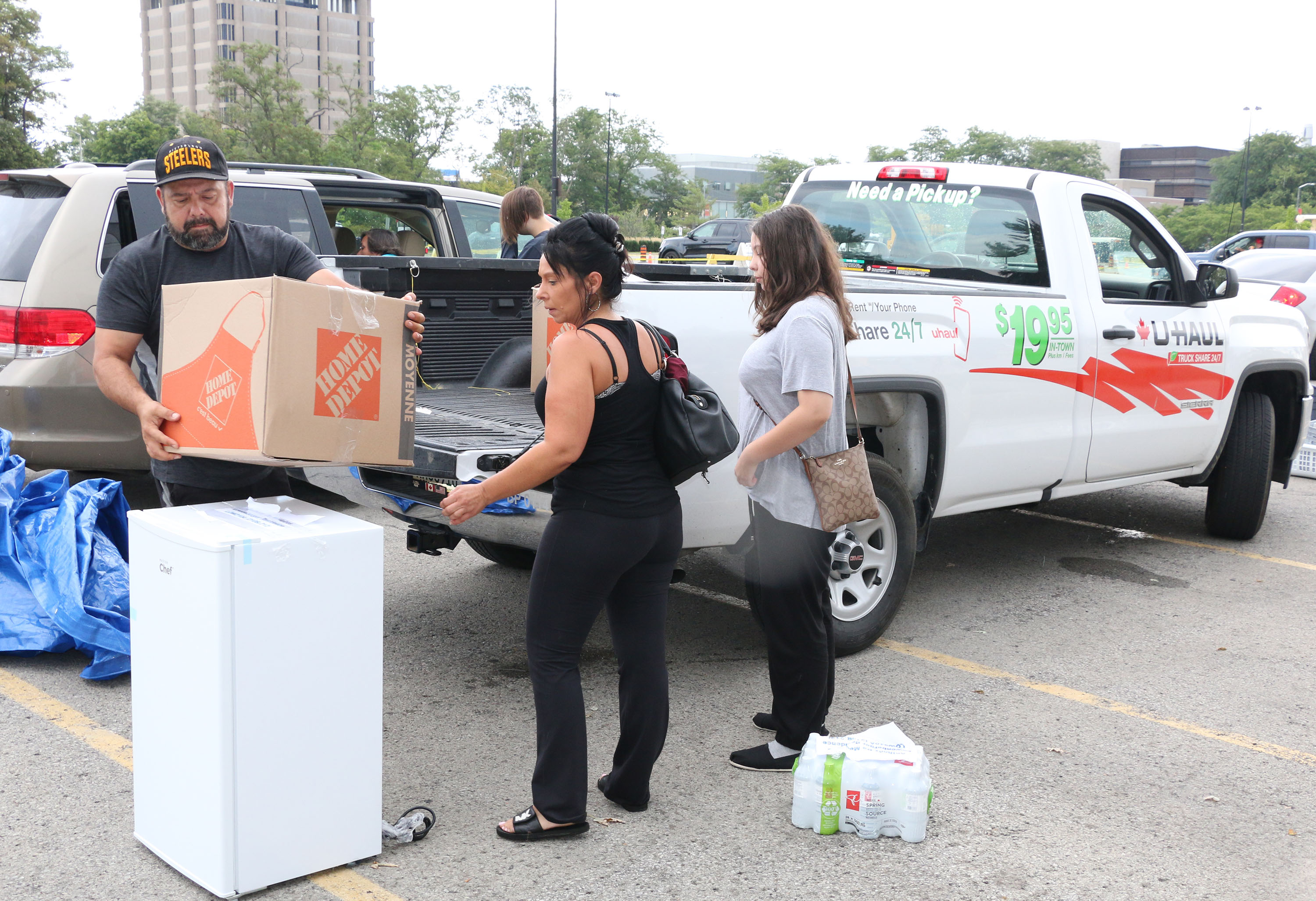 “I wasn’t going to waste any time,” Demedeiros said with a laugh. “I wanted to rent the truck and get this over with. I’m excited and proud that my first child is going to university.”

His son Anthony Demedeiros was one of nearly 2,400 first-year students who moved into Brock’s seven residences Sunday during Move-In Day 2018. The six-hour blitz was the result of months of planning and the work of more than 600 student volunteers, most of whom are brought together and encouraged to take part by the Brock University Students’ Union (BUSU).

“I think it’s phenomenal to see so many people here who are willing to give up their day to help out fellow Badgers. It’s treated like we’re one big family,” said BUSU President Aidan Hibma. “We have one of the best move-in days across the country and it really contributes to the student experience that we’re focused on here at Brock and we’re focused on in BUSU.”

In addition to the hundreds of student volunteers and Brock student-athletes, more than 100 Brock staff members were also on hand Sunday as many key services such as the Brock Card, Brock Central, ITS, Parking, Residences, Dining and others were open to help make the student onboarding process easier.

Director of Residences Jamie Fleming said he’s continually impressed by the professionalism and willingness to help shown by everyone on campus for the event.

“Expectations are very high, but there’s a tremendous sense of accomplishment at the end of Move-In Day where all these volunteers, all these members of staff have come together for the common purpose of welcoming thousands of students to campus on the Sunday of Labour Day weekend. It’s a real sense of team work,” he said.

Among the staff members on hand to help out was President Gervan Fearon, who greeted parents and students and answered the occasional “how do I find this location?” question that were a common occurrence Sunday. 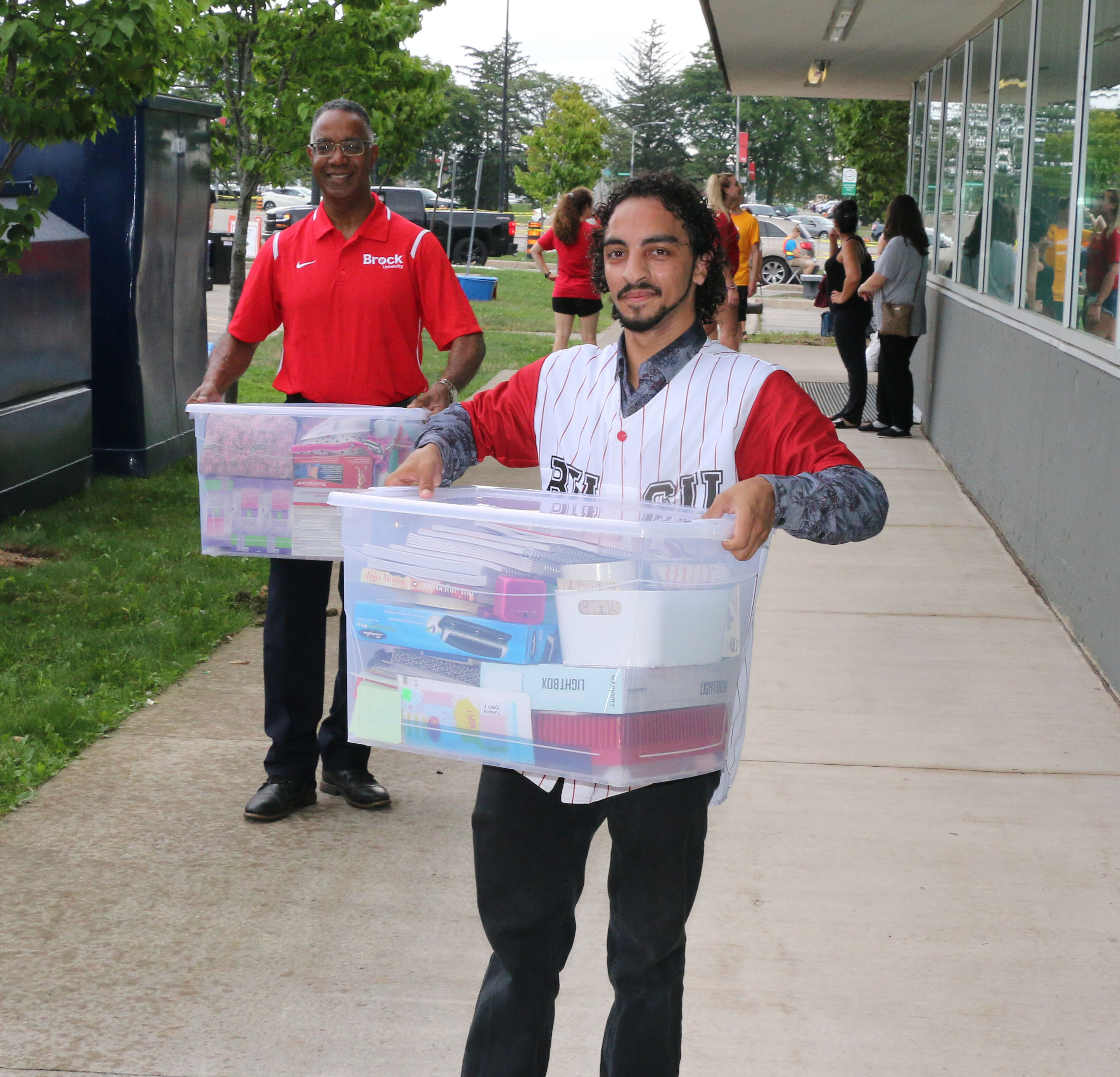 “One of the amazing things about this day is that the relationships these students form today will be bonds and relationships that will last a lifetime,” Fearon said. “For myself, I can think about friends I met in my first year and years later, those bonds are still there.”

Fearon pointed to a recent Brock alumni and recruiting trip to Trinidad, where a housemate from his undergrad years at the University of Guelph showed up with his family just to say hello and reconnect.

“It’s those kinds of moving moments that really tell us the bonds formed in university are lifelong bonds and it’s just amazing,” he said.

For Nina Pytel, Sunday was filled with nervous energy. She arrived from Mississauga with her mother Aneta, who admitted the day was a bit sad.

“It’s going to be really quiet when I go back home,” she said.

Nina, who will be taking Biochemistry, was feeling the nerves of a new environment.

“It’s kind of a hectic today, but it’s funny because everyone is in the same situation. I’m a bit nervous about the course load, but mostly I’m excited to start a new chapter in my life,” she said.

Another parent moving his first child into Brock residences Sunday was Goodman School of Business Professor Barry Wright, whose daughter Monica is taking Medical Sciences. After seeing the Move-In Day process from the other side for years, he found the experience to be a great one as a parent. 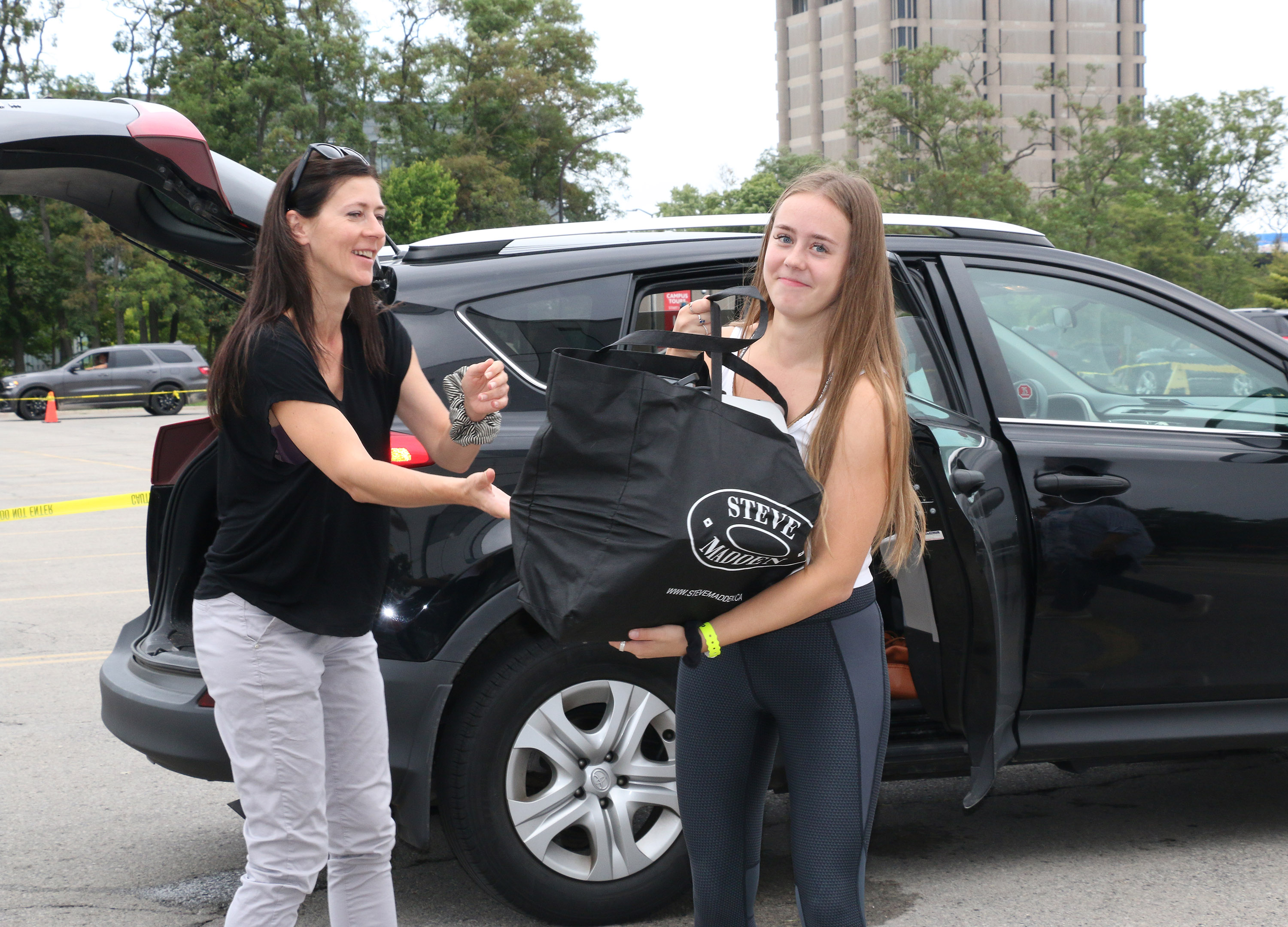 “It’s a well-oiled machine. Even right from when we arrived onto campus there were greeters there in a good mood making my daughter feel very welcome coming here,” he said.

Across the Brock campus, emotions ranged from tears to cheers to nervous laughter.

After dropping off the well-packed boxes and closing the tailgate of the rented U-Haul, Demedeiros said it was all excitement as his son Anthony enters his first year of the Film Studies program.

“I’m totally excited for him and his adventures here at the University. He got accepted at other schools for his program but he took the tour here and Brock was his No. 1 choice.”

Below is a BrockTV video from the day: